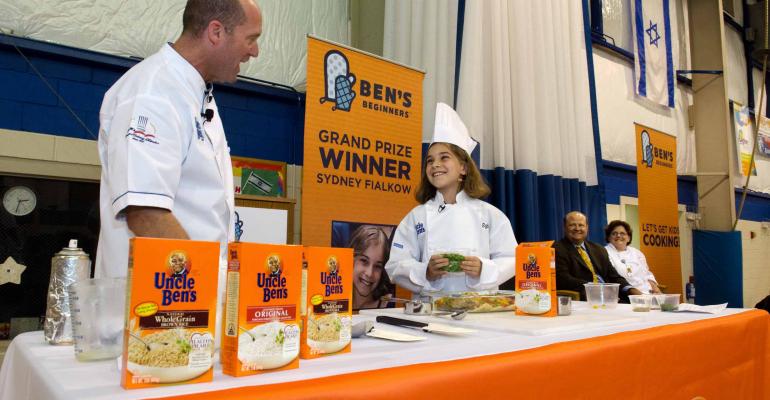 Epstein School, a private academy in Atlanta, won $50,000 in renovation funds thanks to one of its students, who placed first in the Ben&rsquo;s Beginners Cooking Contest sponsored by Uncle Ben&rsquo;s

It was such a fun event that even the vice president of marketing for Uncle Ben’s was doing the chicken dance (or, as it was more appropriately called in this case, the “chicken and rice dance”). The venue for this spasm of exuberance was the Epstein School in Atlanta, a private Jewish elementary academy with an enrollment of around 650, all of whom seemed totally jacked that one of their classmates might win the Ben’s Beginners Cooking Contest sponsored by Uncle Ben’s. The excitement was elevated further by the fact that winning would bring the school a $50,000 check to be used for cafeteria renovations.

The Epstein students had gathered in the school’s gym to watch the announcement of the contest winner on the popular daytime Rachel Ray Show, and when indeed Epstein’s own Sydney Fialkow appeared with Ray and was announced as the winner, the place went bonkers. Sydney then made her entrance (the Ray show had been taped earlier and she and her family were sworn to keep the result secret until the broadcast was aired) in the gym. She was joined by Tim Snyder, vice president of marketing for Uncle Ben’s parent Mars Food US; Mars Food Culinary Innovation Manager Chris Skolmutch; Epstein Principal Stan Beiner; and the school’s foodservice director “Miss Jane” Escalera.

Then everyone did the chicken and rice dance to celebrate, including, yes, Snyder, who busted some pretty impressive moves. Snyder then took the podium to make some remarks about the purpose of the whole thing.

“The goal of Ben’s Beginners is to celebate how cooking with your kids leads to better relationships with food and with each other,” he said. “Sydney and her family truly exemplify this message. Healthy eating habits should be practiced at every meal and creating healthy eaters is the goal of school foodservice professionals around the country. We are pleased to support Sydney’s school foodsevice nutrition program by awarding the cafeteria makeover.”

The Ben’s Beginners competition was launched earlier this year and promoted to school foodservice directors because of the $50,000 cafeteria renovation funding attached to the winner (who also receives $20,000 individually). It drew more than 700 entries from kids aged five to 12, who each submitted a video showing themselves (and family members in many cases) cooking a dish using Uncle Ben’s rice.

Sydney, an effervescent 10-year-old who is a fourth grader at Epstein, submitted her entry, Sydney’s Chicken & Rice, assisted on camera by her mom and grandmother (the recipe can be viewed here). She made the field of four finalists and was then named the grand prize winner on the Ray Show on May 2nd. Her Sydney’s Chicken and Rice dish uses chicken breasts, rice, vegetables and seasonings all baked in the oven.

“It is a very flexible recipe,” observed Skolmutch, who helped Sydney prepare the dish in front of the gathering. “You can use different kinds of vegetables and spices to create different versions.”

Mars is working to adapt a version that could be used in school meal programs while meeting federal nutrition guidelines for reimbursable meals.

Meanwhile, one of the people happiest with Sydney’s triumph is Escalera, who gets the $50,000 check to help renovate the school cafeteria, a somewhat rundown space at the moment where all 650 students, plus staff, get their lunch each day.

"I’m so thrilled Sydney was able to win this contest for our community and our school,” she says. “Our cafeteria hasn’t been renovated in more than 15 years, so this donation will make a big difference for our school and our students.”

The school does not allow brownbagging, and the meals are free as part of the tuition. They are also all kosher in keeping with the school’s religious orientation.

Escalera designs the menu for each day (she calls it “Jane’s cycle menu”) based on her own sense of what the students would like. There is only one entree choice each day aside from a vegetarian alternative, prepared by a staff of four (including Esclera). The food is served by volunteers. There are four lunch periods, so each wave consists of 150-200 kids plus staff.

The three runners up in the contest—the Mancebo family of Turlock, CA; the Mullix family of Wesley Chapel, FL; and the Sullivan family of Nyack, NY—each received a $5,000 savings bond earmarked for each child’s college education and a $10,000 donation for each child’s school cafeteria.

Escalera says she hasn’t given much thought yet to exactly what the $50,000 will be spent on but Sydney already had her own thought on the matter: “I would like to see the walls painted with a more exciting color,” she said.

“I guess that will be part of the renovation,” Escalera laughs. “She’s the one who made it possible.”