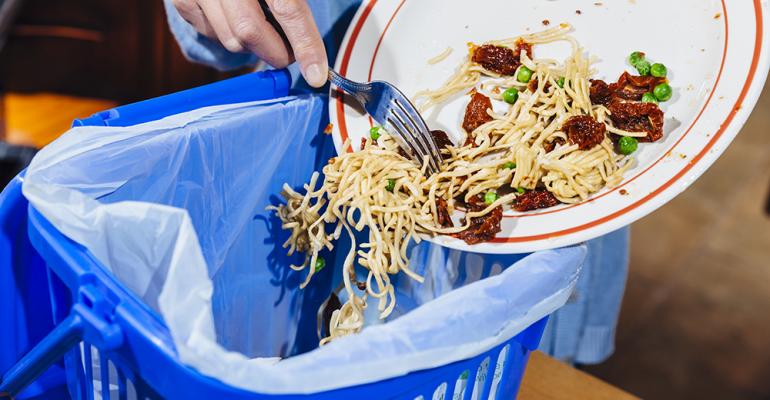 New research on behalf of the Champions 12.3 organization shows that for every dollar food service operators serving hospitals, schools, sports arenas and similar facilities invest in programs to curb food waste, they save more than six dollars in operating costs. The report, “The Business Case for Reducing Food Loss and Waste: Catering,” examined financial cost and benefit data for 86 sites across six countries and found that within one year, the sites had reduced food waste by 36 percent on average, and 64 percent had recouped their investment.

One-third of all food produced in the world goes uneaten, leading to tremendous economic, social and environmental impacts, the report notes. Food loss and waste accounts for $940 billion in economic losses and eight percent of global greenhouse gas emissions annually. At the same time, more than 800 million people are chronically undernourished.

“Taking action across the food industry is vital if we are to halve global food waste by 2030,” commented Dave Lewis, Group Chief Executive of Tesco and Chair of Champions 12.3 in a statement accompanying release of the report. “As Chair of Champions 12.3, I’m delighted to be able to share today’s report, which clearly shows that reducing food waste in the catering sector isn’t just the right thing to do, it also makes good business sense.”

Quantifying food waste in different areas generates a food waste inventory that helps managers prioritize hotspots to concentrate on, the report notes. It recommends the use of digital measurement tools as it found manual measurement systems tend to underreport waste and may not capture all the opportunities for reducing it.

According to individuals cited by the report, staff engagement, through daily staff meetings, casual conversations, formal training and peer learning opportunities, was a key variable that determined the success of a food waste-reduction program among the surveyed sites. “Management should also work to remove any perception of blaming staff for causing waste,” the report cautions. “If staff fear they will be blamed for wasting food, rather than rewarded for measuring it, staff engagement will quickly decline.”

Menus that change frequently and high rates of turnover are other factors that can erode engagement, the report warns. “Such factors can lead to cyclical patterns of waste wherein the reduction program works as intended for a period of time, but thereafter waste levels drift upward,” it notes. To combat this, it recommends that managers embed the importance of food waste prevention and tactics into their standard training and operating procedures.

Another report recommendation is the use of pilot projects to test a food waste-reduction program on a small scale before rolling it out operation-wide. “Even in companies that have widened the breadth of their food waste-reduction program to all or nearly all of their sites, innovative solutions to food waste can be piloted in a few key sites and later expanded,” the report adds. “According to interviews, on-site kitchen staff often developed some of the most creative and effective strategies to combat waste, and management should encourage collaboration among sites via pilot programs and cross-site peer learning opportunities.” Managers should also build rewards into a food waste- reduction program to drive desired behavior change and engagement among staff, it notes.

In the area of reducing overproduction, the report notes that many sites it examined had at least one menu item that was consistently under-consumed. “By simply producing smaller quantities of such items, sites were able to prevent waste without negatively affecting the customer experience,” it offers.

Meanwhile, because it isn’t possible to forecast customer demand perfectly, onsite dining kitchens will generally find themselves with leftovers and potential wasted food, the report concedes. “In these cases,” it suggests, “having a Plan B for how to safely repurpose leftovers can allow the kitchen to generate revenue from this potential waste. For example, unsold or leftover meat from breakfast may be a potential ingredient for a lunch or dinner dish. Sites that incorporated previously unused food (for example, peels, seeds, skins, bones) into dishes were able to produce value from items that typically go straight to the waste bin. For example, making soup stock from such items can cut down on costs if soup stocks were previously purchased and can create added value through new soups and other dishes.”

“We began segregating, weighing and reporting our food waste in early 2014 through our own online accounts portal,” commented Mike Hanson, head of sustainable business for BaxterStorey, a British/Irish caterer (foodservice contract management company) that was one of the firms studied in the report. “We split the waste in to production waste, spoilage waste and plate waste and alongside that ran our in-house Green Flash training modules. We have seen some fantastic results with more than 40% reduction in waste. The ROI is far reaching and not just financial in terms of cost of food; we have also seen huge savings in waste disposal and energy costs for our clients, our margins have improved and we have seen a massive reduction in carbon and other environmental impacts.”

Champions 12.3 is a coalition of nearly 40 leaders across government, business and civil society dedicated to achieving Target 12.3 of the United Nations’ Sustainable Development Goals, which calls on the world to “halve per capita global food waste at the retail and consumer levels and reduce food losses along production and supply chains, including post-harvest losses” by 2030.