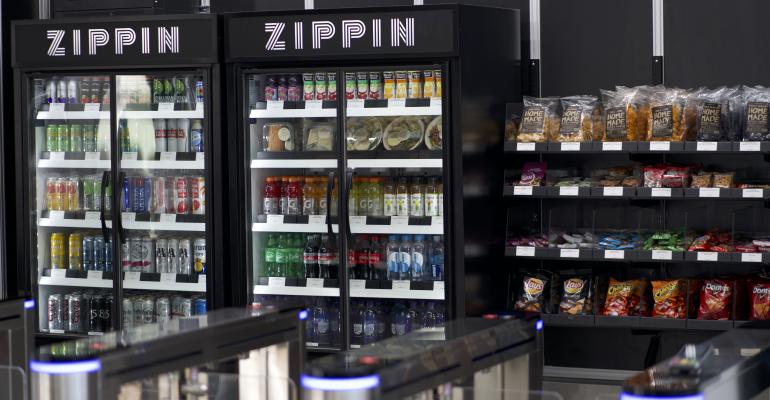 This and Sodexo Live! rolling out mobile vending robots at the Comic-Con convention are some of the tech-related developments you may have missed recently.

Nissan Stadium in Nashville and checkout-free technology platform Zippin have announced that five Zippin-powered stores will launch in time for the Tennessee Titans NFL pre-season games this summer. The stores will be operated by concessions/catering firms Levy and Legends Hospitality to offer frictionless shopping experiences on both the concourse and club levels.

Sodexo Live! is teaming up with tech firm Tortoise to launch the first-ever mobile vending robot in a convention center during Comic-Con International July 21-24 at the San Diego Convention Center. The tap-to-pay robot will be selling fresh California burritos made by Executive Chef Sufi Karaien and 20-oz Gatorade. Convention guests can approach the roaming low-speed cart, tap to pay with a credit card, Apple Pay or Google Pay, take their item, and go as transactions take less than 15 seconds to complete.

Read more: Sodexo Live! and Tortoise team up to debut first-ever mobile vending robot in a convention center during Comic-Con 2022

This summer, the first Jamba by Blendid robotic kiosk is opening at a Love’s Travel Shop near Sacramento. Truckers at the stop and other travelers will be able to walk up to the kiosk to order a favorite veggie or fruit smoothie and watch the robot arm in action.  Love’s has 590 locations in 41 states, opening up prospects for expanding Jamba by Blendid kiosks in the travel center market.

Fast-casual concept Wow Bao is partnering with Automated Retail Technologies to put high-tech, Wow Bao kiosks in hospitals, hotels, bars, schools, airports and casinos throughout the U.S. and Canada over the next two years. The machines feature large touchscreens for viewing Wow Bao’s menu and ordering and can produce 68 servings per load, offering dishes such as Teriyaki Bao, Mongolian Beef Bao, and Chicken Dumplings.

At most concepts, customers take out their smart phones, pull up the camera and point it at the QR code, which provides a link to the restaurant’s menu. But the Pensacola Beach Hilton, a property under the Innisfree Hotels portfolio, has moved beyond this utilitarian use and taken QR codes to a new level. When a diner visits one of the property’s restaurants, they’ll find the usual menu joined by video previews of select dishes and drinks, so they can see how the items have been prepared.

“When the COVID pandemic encouraged us to revitalize QR codes as a touchless way to access restaurant menus, we saw that our guests began to embrace the use of the QR codes, so we started thinking about other creative ways to leverage this technology to enhance the guest experience,” said Scott Ford, director of marketing at Innisfree Hotels.