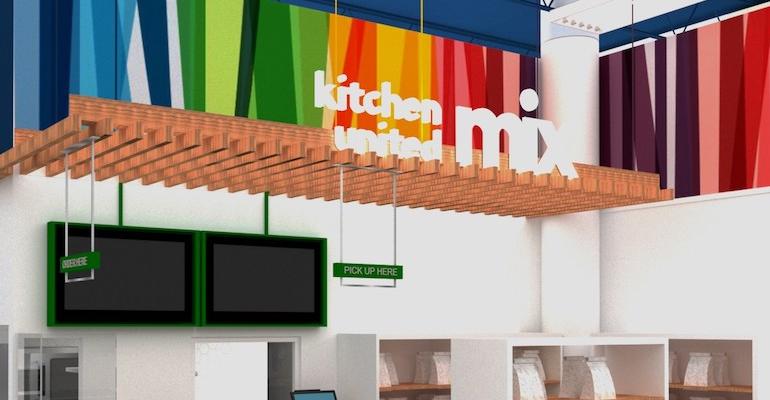 Kitchen United
The partnership also plans to expand to Kroger locations in Texas this month.
Operations>Technology

This and the deployment of increasingly sophisticated robots are some of the tech-related developments you may have missed recently.

Ralphs Grocery has launched a ghost kitchen inside its store in the Westwood section of Los Angeles under a partnership between parent Kroger Co. and Kitchen United that lets customers place orders from an initial roster of 10 eateries via mobile device or at an in-store kiosk and then pick up their meals on-site or have them delivered. The partnership also plans to expand to Kroger locations in Texas this month.

Meanwhile, Kroger is also expanding its grocery delivery partnership with robotics firm Nuro to deploy Nuro’s third-generation autonomous delivery vehicle that can carry twice the cargo volume of its second-generation counterpart while including modular inserts to customize storage and offering new temperature-controlled compartments to keep food warm or cool.

LG Business Solutions USA announced that its LG CLOi ServeBot is coming to the U.S. market in early 2022. Model LDLIM21 is the world's first commercial service robot earning UL 3300 certification for safe operation in complex commercial environments such as restaurants, retail stores and hotels, allowing workers to safely use robot assistants that navigate busy environments while carrying up to 66 pounds of food or goods.

The Checkers & Rally's commercial restaurant firm has announced plans to launch AI-powered voice ordering bots at 267 corporate stores throughout 2022 in partnership with restaurant software vendor Presto, which introduced pay-at-the-table tablets over a decade ago. Checkers said using automated voice bots to take orders at the drive-thru will allow the restaurants to redeploy existing workers to "more people-dependent" tasks that enhance the guest experience. The move is part of an expanded commitment by Checkers & Rally's to leverage technology, as CEO Frances Allen explained in a recent NRN Extra Serving interview.

Read more: Checkers & Rally's is rolling out voice-ordering bots to take drive-thru orders at 267 restaurants amid a crippling labor shortage in the industry

Sidewalk delivery firm Serve Robotics has announced the deployment of its next-generation delivery robots, becoming the first autonomous vehicle company to complete commercial deliveries at Level 4 autonomy, which allows the robots to operate routinely without human intervention. The company's robots are equipped with an extensive array of technologies that ensure the highest degree of safety by utilizing multiple layers of redundant systems for critical navigation functions, including active and passive sensors like cameras to navigate safely on busy city sidewalks.

The X Pot hot pot restaurant in Chicago not only uses robot waiters but offers what it calls a "5D" experience room that can be transformed to make it look like diners are underwater. The eatery is an example of the cutting edge of how technology is allowing the foodservice world to evolve new experiences to draw customers.