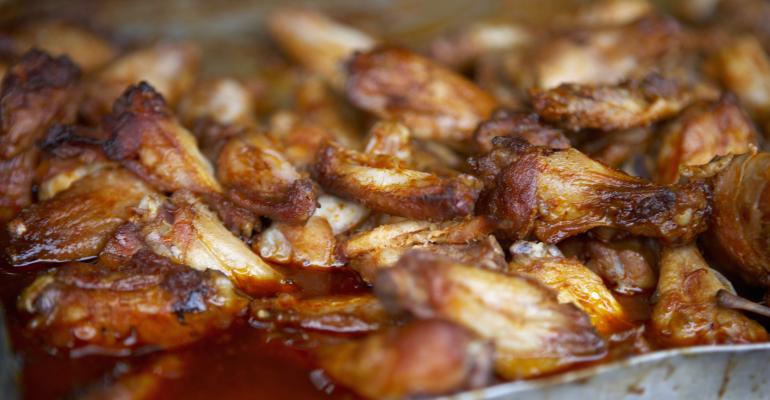 This and a major regional airline entering the drone food delivery market are some of the tech-related developments you may have missed recently.

Restaurant automation vendor Miso Robotics has announced the debut of Flippy Wings robotic chicken wing frying solution for high-volume operations in partnership with Inspire Brands and its Buffalo Wild Wings division, which began testing Flippy Wings at the Inspire Brands Innovation Center this fall. Miso says its tests show a 10-20% overall increase in food production speeds when deploying the machine with better rates of cook-time accuracy. “From day one, Flippy Wings will cook more food with less waste and save staff for higher value contributions," says CEO Mike Bell. "Flippy Wings fries fresh, frozen or hand-breaded products like a pro, avoiding cross contamination and increasing throughput while reducing costs. It is fast, safer to operate than traditional fryers and the whole system can be set up in just a few hours over existing equipment."

Regional airline Mesa Air Group Inc. says it is planning to test home delivery of food and beverages via drones in Nevada by the end of the year as it considers the potential for nationwide service. The move is another foray into an increasingly crowded field vying for market share in the emerging automated home delivery industry that also includes major e-commerce players like Amazon and Google as well as dozens of startups.

Add North Carolina A&T to the list of campuses rolling out robotic meal delivery, in this case with the use of units from vendor Starship Technologies in partnership with campus dining services provider Sodexo, which initially plans to make deliveries from three on-campus restaurants: Qdoba, 1891 Bistro and Paavo’s Pizza. Orders can be placed via apps, there will be no fees at least for the first two years and the service works with current student meal plans.

Read more: Robots are coming to deliver food on campus at NC A&T

The North Ayrshire school district in Great Britain is rolling out a new biometric payments system in the cafeterias at nine of its schools, and using facial recognition to verify the identities of students paying for school lunches. Administrators argue that the new system is safer and more efficient than its predecessor, which had asked students to pay with either fingerprint recognition or a card and PIN code.The process can be completed in as little as five seconds, allowing the school to move students through the lunch line more quickly. “In a secondary school you have around about a 25-minute period to serve potentially 1,000 pupils,” said David Swanston, managing director of biometric system vendor CRB Cunninghams. “So we need fast throughput at the point of sale.”

The demographic decline affecting rural Europe has led to many smaller grocery stores in rural Sweden closing their doors for good, leaving the remaining residents in the midst of what could be described as ‘food desserts,’ but one solution is being offered by Stockholm-based start-up Lifvs, which has already placed more than 20 unstaffed grocery stores in different rural spots in Sweden. Customers sign up to an app that provides them with a key to the store, where they can then scan the barcodes of the products they want to pick up with their phones, with payment for products chosen directly deducted from their accounts.