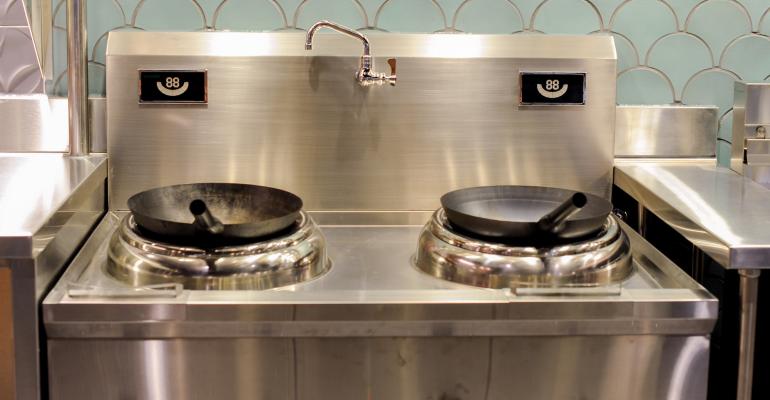 Microsoft
The cutting edge all-electric dining hall at Microsoft’s One Esterra campus includes specially developed equipment such as these electric woks, all with the goal of creating a more sustainable foodservice operation.
Operations>Technology

The past three years have seen a foodservice culture evolving to meet customer demands for more convenience while dealing with a chronic and seemingly long-term labor shortage that has driven up the cost of operation. The response from the manufacturing community to this situation has been a parade of technological innovations that have impacted how food is ordered, prepared and served/delivered to customers in a growing number of both commercial and onsite locations.

While dramatic whizbangs like drones and robots are the most eye-catching developments, almost all areas of foodservice operations, from cooking and dishwashing to front-of-the-house customer interaction have been impacted by high-tech innovation. Overall, trends in commercial kitchen equipment design are focusing on minimizing four things—labor, energy usage, food waste and kitchen space—while the front of the house has seen tech-driven innovations in the ordering and fulfillment areas. In fact, with remote ordering, robot or drone delivery, automated food kiosks and similar technologies that push out service from traditional restaurant and cafeteria spaces, the “front of the house” is in a very real sense no longer just the servery and dining room but anywhere customers are, from office desks to college dorms. 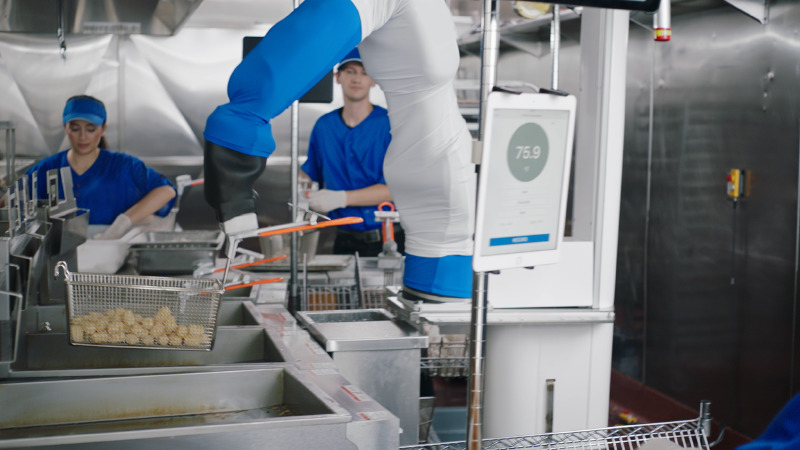 All-electric kitchens: Fire was man’s first—and undoubtedly most enduring—food preparation tool, whether it came from rubbing two sticks together or from igniting a flammable gas. Later, the discovery of electricity produced a second means of generating heat that branched into side areas like microwaving and induction cooking, Recently, the stovetop—traditionally the province of gas-fired flame for most discriminating culinarians—is giving way to electricity, which is slowly shedding its image as a second string cooking element as environmental concerns rise in social prominence because it can be generated sustainably (solar, geothermal, etc.) while gas has to be exctracted and transported in ecologically destructive ways. As a result, experiments in all-electric commercial kitchens are already underway, promising to produce ever more effective gasless and flameless cooking equipment.

Combi ovens: Probably the most significant recent development in cooking technology has been the combi-oven, originally introduced several decades ago but which has been evolving into ever more sophisticated units as digital and sensor technologies have advanced, allowing the use of convection and steam in multiple stages automatically to produce optimal results with little or no human involvement, an important consideration in a labor-challenged kitchen environment. Units now or soon will not only accomplish cooking tasks ranging from dehydrating and smoking to steaming, braising and roasting and can also serve as a proofer, a holding cabinet or a slow cooker. As the units can be programmed with as many as several hundred different cooking cycles of varying intricacy, they not only reduce the labor time needed for production, but also the skill levels needed to produce quality dishes. In addition to holding and cooking, modern combi-ovens can include various additional features like grease pumps, ventless hoods, smoker units and UPC code readers that allow product info to be loaded automatically and integrated into cooking instructions.

Warewashers: Smart dishwashers that conserve water and energy, not to mention staff time, are the coming thing in the warewash category, with automation feeding soiled dishes into a washing and drying tunnel and operating only as long as there are dishes to wash. Some models also recover the steam generated by the hot wash water to heat more water, saving energy. 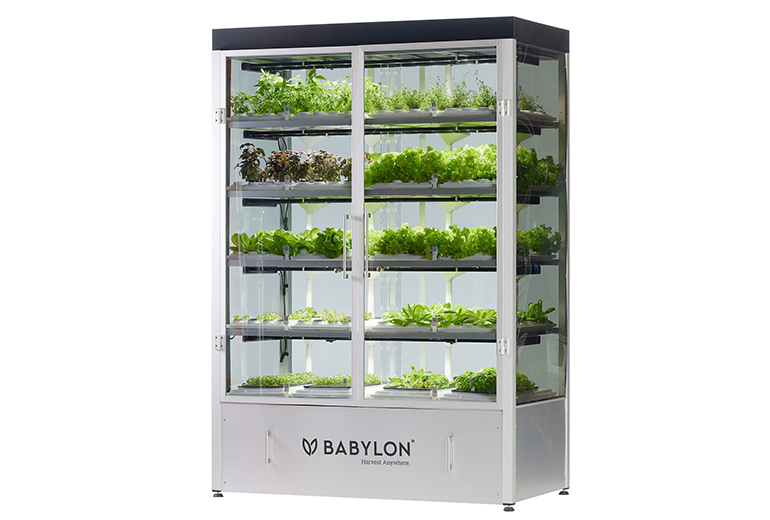 Hydroponic units from Babylon Microfarms have been installed in a number of university dining halls operated by Aramark over the past year, giving students a chance to observe greens growing in real time and to eat them immediately when they’re ready for harvest.

Indoor gardens: Local sourcing has been slowly circling the center, from nearby farms to onsite gardens to, now, gardens that are literally in the kitchen or food station, where herbs and greens can be harvested just before serving. While they can’t meet volume requirements, sophisticated garden towers and growing cabinets can provide a highly visible symbol of an operation’s commitment to sustainability while also augmenting dishes with ultra-fresh ingredients. Obviously, the crops are unaffected by weather or seasonality so they are always available, depending on growth times, which can range from a few days to several weeks depending on the crop.

IoT: At the leading edge of the evolution of the high-tech automated (“smart”) kitchen is the concept known as the Internet of Things (IoT), which is basically the interconnection of different pieces of kitchen equipment through sensors and internet connections that allows remote monitoring of production operations while saving time, labor and energy. As labor becomes scarcer and more expensive, more kitchens are expected to turn to IoT-enabled smart devices that can, for instance, automatically scale or adjust recipes based on ingredient availability.

Robot chefs/kitchens: One step up from smart kitchen equipment are robotic units that perform multiple but repetitive tasks like cooking and seasoning wings, making pizza, flipping burgers and tossing salads. Major commercial restaurant chains have taken the lead in driving and implementing these technologies because they anticipate significant investment returns in the form of labor savings and production efficiencies. Fully automated restaurants have been cropping up offering limited but customizable menus