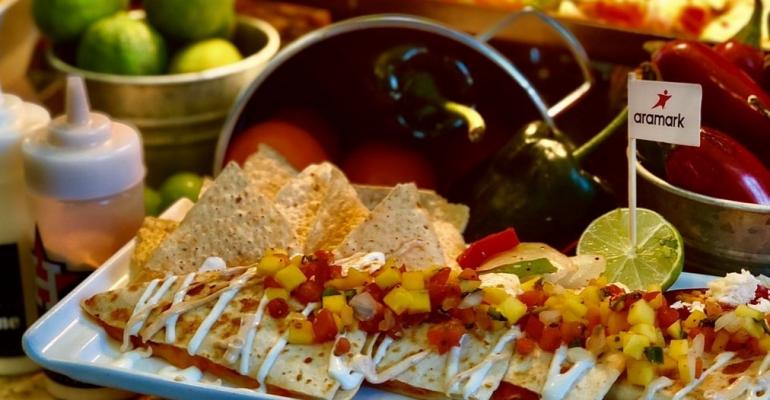 Aramark sees upticks in healthcare and facilities in fiscal 2021

With the return of students to schools and colleges and fans to sports venues, Aramark sees positive signs in an otherwise down year.

Aramark’s U.S. Food & Support Services (FSS) division saw a 7.6% decline in revenues in fiscal 2021 as compared to 2020, though, like the other two “Big Three” contractors (Compass Group and Sodexo), its 2020 fiscal year only partly covered the pandemic period, compromising year-to-year comparisons with 2021. Aramark’s fiscal year basically goes from the end of September one year to the start of October in the next, so its 2020 fiscal year included about five months of pre-COVID operation.

Not surprisingly, the drop was led by B&I business, which declined 36.6%, while Education (covering both K-12 and college/university business and constituting the company’s largest area of operation) fell a more modest 12.1% and Sports/Leisure/Corrections by an even more modest 1.6%. Meanwhile, Healthcare actually increased, by 8.1%, while the company’s substantial Facilities/Other unit grew 6.3%.

Commenting on the individual markets in its 2021 annual report, Aramark noted about the Education business that represents 31% of 2021 fiscal year volume that the return of students and educators to in-person classes in both K-12 and Higher Education had a positive effect on revenues. The Higher Education unit implemented enhanced on-campus experiences like additional meal flexibility and digital innovation that helped mitigate slower recovery in the retail and event catering areas, while K-12 continued to benefit from participation in universal government-sponsored meal programs.

The Sports/Leisure/Corrections business, which is the company’s third largest area of operation—fiscal 2021 revenues were about equal to the combined totals of the B&I and Healthcare businesses—benefitted from fans largely returning to venues at full capacity for the 2021 Major League Baseball season and the start of the 2021 National Football League season. Also, national parks continued to serve as attractive vacation destinations even in the midst of the pandemic while the corrections business returned to pre-COVID-19 levels. However, reduced activity continued in conference centers.

In Healthcare, the annual report notes that operations continued to gradually improve with a higher level of voluntary procedures, routine medical appointments, and hospital visitations, despite retail and catering volumes being slower to recover. Meanwhile, in Business & Industry, companies introduced greater in-person return-to-work activity, although at a measured pace, particularly with white-collar clients.

Going forward, Healthcare business is expected to be bolstered by the June 2021 acquisition of Next Level Hospitality, which provides culinary and environmental services to the senior living industry, specializing in skilled nursing and rehabilitation facilities.

In Aramark’s Facilities & Other unit—which actually comprises the company’s second largest area of business by 2021 fiscal year revenues, just ahead of Sports/Leisure/Corrections—“operations remain positive, surpassing pre-COVID-19 levels, as locations continue to increase in-person activity, while we continue to offer additional project-oriented services to ensure locations are ready and safe,” the annual report said.

In terms of major initiatives taken in the past year, there was the “strategic collaboration” Aramark entered into with Starr Restaurant Organization, one of the largest multi-concept and independent restaurant groups in the country, which includes an exclusive licensing agreement that will allow Aramark to operate designated Starr concepts and brands within its various markets.

Aramark also continued its moves in the sustainability area with moves like setting a new climate goal that commits it to reduce greenhouse gas emissions by 15% by the end of 2025, committing to science-based targets for emissions reductions and making a commitment to increased local seafood sourcing in New England. The company also reported on the five year results of its Healthy for Life 20 by 20 initiative created to help improve customer health through better nutrition and lifestyle habits, marking the milestone by announcing an expanded nutrition education effort.

Aramark in 2021 also announced the launch of its Chef Spotlight program to celebrate its diverse culinary talent and expanded its community outreach during the 2021 Global Day of Service. It won accolades for its inclusion and diversity efforts, being recognized as one of the best places to work for disability inclusion by being named a Top 50 employer for people with disabilities for the seventh consecutive year. It also was recognized by being named by Seramount as one of the best companies for multicultural women and by earning top marks in Human Rights Campaign’s 2021 Corporate Equality Index.