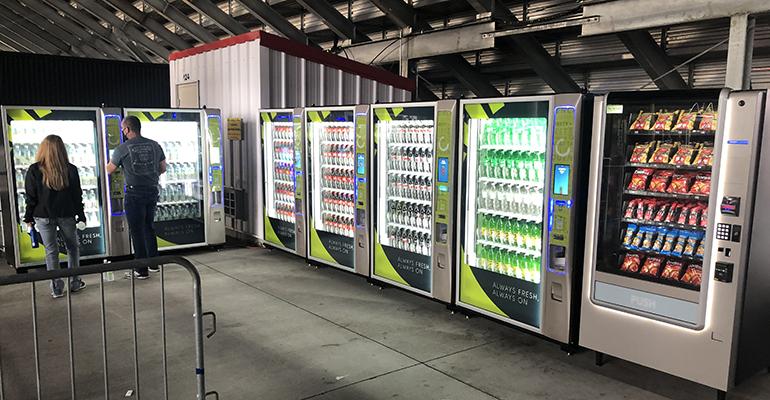 Levy Motorsports
One successful Levy initiative at racetracks this past season was setting up banks of vending machines in partnership with fellow Compass Group unit Canteen that were cashless and dispensed items like snacks and non-alcoholic beverages.
Top 50 Contract Companies

Levy Motorsports adapts to a changed concessions and catering environment

Levy’s Motorsports unit, which operates concessions and suite catering at racetracks around the country, has designed and deployed modified ways to serve customers in the coronavirus environment and afterwards.

No segment of the onsite dining world has been hit harder by the coronavirus pandemic than the sports/entertainment concessions market, which literally saw a complete halt to operations last spring, followed by some minimal loosening in select venues, depending on local circumstances, as the year went on.

Concessionaires operating in these facilities have obviously taken a big hit, but some are starting to emerge from the experience with new programs and operational adjustments that will allow them to do business efficiently both in the latter stages of the COVID environment and in the post-pandemic future.

Related: How onsite dining workforces will have to adapt to a post-coronavirus world

One of these is Levy Motorsports, which operates concessions and suite catering services at 25 racetracks around the country. It received a huge boost in market share when it merged last fall with Americrown, which had operated food & beverage operations at 16 NASCAR-owned motorsports facilities.

“The acquisition gave us a share of the majority of racetracks around the country and gave us the opportunity to double in size,” says Michael Hocter, senior vice president of operations for Levy Motorsports. “We are a sector that is growing for the company at a pretty good clip.”

Indeed, unlike much of the sports/entertainment world, NASCAR seems to be on the way back, if somewhat haltingly.

The high-profile kickoff of NASCAR’s 28-race season takes place in mid-February at the Daytona 500 in Florida, a state that has eased restrictions more than most. Hocter expects about 38,000 race fans to show up there, a number nowhere near the track’s normal capacity of 101,000 but in the COVID world an encouraging sign of better times coming.

After Daytona, how the rest of the schedule, which runs through November, will turn out remains to be seen. The season’s third race, originally scheduled for the Auto Club Speedway in COVID-wracked California, has already been moved to Florida—Daytona, actually—which means the season’s first three races will be held in the more open environment of the Sunshine State before moving to more uncertain territory in Nevada (Las Vegas) and Arizona (Phoenix) in March.

“I think NASCAR is full speed ahead as far as the races,” Hocter offers. “I think they’ve done a real nice job to keep drivers and fans safe. They’ll get fans where they can, and I think they have a real solid plan going forward.”

Levy Motorsports, meanwhile, is making the necessary alterations to its operations to keep serving fans. It got an early trial run when it operated at the NASCAR All-Star Race at the Bristol Motor Speedway in Tennessee last summer, debuting a new kitchen layout and other operational adjustments that it plans to refine and continue deploying.

“That was the first major sporting event to come out of COVID,” Hocter recalls. “We had 27,000 fans there and we worked with our risk management team to develop a plan not so much to retrofit the kitchens as to realign and redesign the workflow spaces. We basically started with a shell and then looked at the menu to try to figure out the flow of food production from point A to point B to Point C to the guest.” 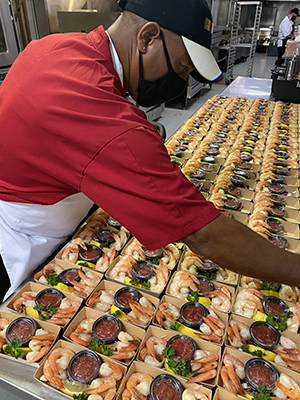 Photo: In the wake of COVID, Levy Motorsports refined its concessions and suite catering operations with options such as these garnished shrimp cocktail servings, packaged in attractive, compostable bamboo containers complete with sauce and lemon slice, for racetrack suite guests.

Different work stations were set up with social distancing and corridors were marked with directions to regulate traffic flow. Staff not only wore the proper protective equipment at all times but were also checked in with temperatures taken before entry. Outside, 10 refrigerated tractor trailers sat by the loading dock, each holding different food components so there would be no mixing and possible cross-contamination before the meal assembly process.

“For instance, if you needed to get produce, it would come out of one trailer and then you would follow a certain route back to a certain production area,” Hocter explains. At that trial run in Bristol, still skittish suite guests received pre-packaged boxed lunches.

“As you can imagine, to put together a couple thousand boxed lunches is no easy task, so we had to be very careful about how we laid things out,” Hocter offers. “From there, though, as people started to get a little more comfortable, we were able to evolve, to the point where by the end of November for the championship race in Phoenix, we were able to give the guest three options.”

One option was that original boxed lunch package, but other options now included a full-blown chef’s table, though with the food covered behind plexiglass and served by an attendant, along with a modified chef’s table with meal components individually packaged in attractive compostable containers and served by attendants.

“I think we were able to flex what we were able to do and really provide the guest an experience that they felt comfortable with no matter which option they chose,” Hocter says.

For general concessions, menus have been limited to only four or five pre-packaged items that come bagged complete with condiments, disposable implements and napkins, and which customers order at plexiglass-enclosed concession stands while maintaining proper distancing in the queues.

One interesting observation that came out of these experiences last year involved a shift in payment attitudes, Hocter observes.

“In NASCAR world, cash is king,” he says, but while Levy tried to be cashless for the most part, “we did still take cash because we didn’t want to turn away any revenue or disappoint any guest, but it was interesting to see the swing to credit card usage,” which accounted for about 85% of transactions, he estimates. “That was a nice surprise to us and something we obviously will deploy going further, especially at the Daytona 500.”

Seeing much less acceptance was a mobile ordering option but a series of grab-and-go markets serving campgrounds surrounding the event venues did do good business, as did banks of vending machines inside the racetracks deployed in partnership with Canteen, a sister company of Levy in the Compass Group North America organization, that dispensed non-alcoholic beverages and snacks.

“That was all cashless and worked really well, and it is also something we will probably be continuing to deploy in the future,” Hocter says. “I think the cashless option is here to stay and something we’ll continue to move forward with. In Daytona we’ll also be doing in-seat ordering for some of the loge boxes, something that has not really been rolled out at a NASCAR track before, but we’re really taking this opportunity to kind of stretch ourselves a little bit and bring a different kind of experience to the NASCAR fan.”

If the COVID experiences has produced any positives, it is in that it has forced the industry to challenge itself to come up with truly innovative new solutions that can be tested and refined with smaller, more manageable customer counts, Hocter observes.

“Sometimes we get in the habit of doing the same thing over and over again and we think we’re thinking outside the box,” he says. “Well, this [pandemic] has really forced us to think about our business in different ways and take a different calculated and strategic approach—and do it with 10 to 20,000 fans instead of the 300 to 400,000 fans we’d typically have at an Indy 500.”