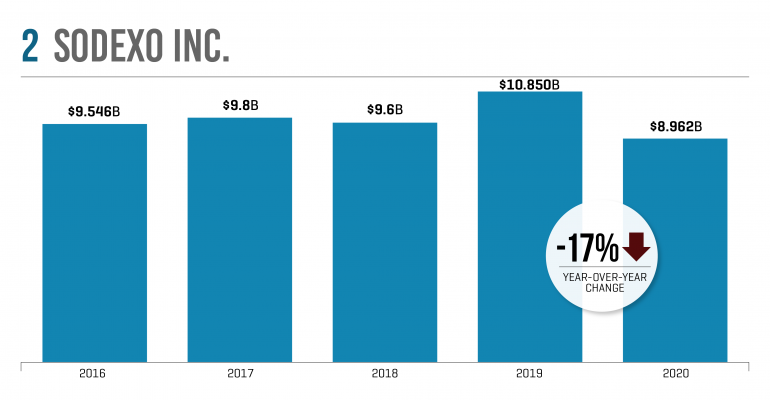 The contract management company responds to pandemic-related challenges with new programs and an acquisition that could position it for the post-COVID corporate dining environment.

Sodexo saw an overall 17.4% organic revenue drop in North American Onsite Services operations in its 2020 fiscal year, primarily because of a 35.9% plunge in the second half that coincided with the outbreak of the COVID-19 pandemic. Especially hard hit was the Business & Administrations unit, which includes sports/entertainment facilities as well as B&I business and which saw a precipitous 48.5% decline in the second half fed largely by “a very severe decline in Sports & Leisure due to the closure of stadiums, convention centers and museums from March,” the company’s annual report notes. “Energy & Resources was also impacted by the closing down of many production sites due to the sharp fall in energy prices [while] Corporate Services was more resilient due to the share of [Facility Management] services and blue-collar consumers who did not stop working during lockdown. Government & Agencies was also resilient as the military bases remained active throughout the crisis, requiring more services.”

Meanwhile, Education (K-12 and colleges) business revenues in the second half nearly duplicated the Business & Administrations performance, declining 46.5%. “Although some universities remained open for foreign students who could not get home, most universities and schools were closed from the end of March,” the annual report notes. “Schools were much more resilient than Universities due to a higher share of [Facility Management] Services and the substantial number of packed meals produced for the local authorities for families in need.”

On a relatively brighter note, Healthcare/Seniors business only dropped 14.6% in the second half, “impacted by lower elective surgery and retail sales in hospitals and some contract losses and exits, including a new contract exit in the fourth quarter [while] Seniors activity was stable,” the annual report says.

Sodexo’s responses to the crisis have included strategies like enhanced cleaning measures that included new training, increased cleaning frequency and the use of greater protective gear; modified restaurant operations, payment, guest flow, and even how supplies are received to enforce requirements of social distancing and reduce exposure; and the creation of specific shortened menus and increase in grab-and-go options.

More specifically, emphasis was put on broadening the company’s Meals to Go program, which features Sodexo’s Simply to Go menu items, and which aligns with current takeaway, social distancing and safety protocols and practices, and expanded its existing Bite app through the introduction of Bite Too.

Of particular interest were three more recent moves—the expansion of the Good Eating Company (GEC) dining solution from Europe to the North American market, the acquisition of the Nourish Inc. commissary/meal delivery firm and, most recently, the forging of a partnership with the HelloFresh meal kit vendor to offer delivery of HelloFresh and EveryPlate branded meal kits to students at the more than 300 U.S. colleges and universities where Sodexo operates. The program will utilize Sodexo’s BiteU app through which students can preselect, order and schedule meal kits for delivery.

Meanwhile, the Nourish acquisition and GEC extension to North America seem designed to position Sodexo for a changed business dining environment that will likely see more remote work rather than the traditional five-days-a-week-in-the-office approach. To that end, GEC offers breakfast, lunch and grab-and-go options using quality ingredients and a delivery service, Good Eating Delivered, so that customers have the option either to pick up food at a client site or have it home delivered.