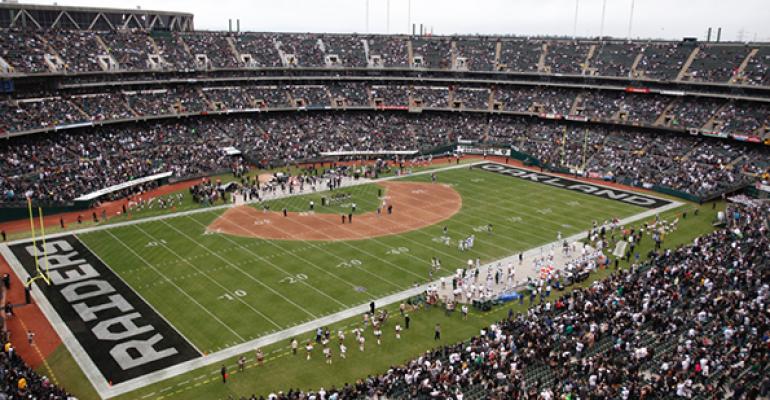 <p>Ovations inked a deal with Oakland&rsquo;s O.co Coliseum in January 2014 to bring its Everything&rsquo;s Fresh program to fans of the A&rsquo;s and Raiders, both of which play home games at the venue.</p>
Top 50 Contract Companies

Ovations, part of the Comcast-Spectacor entertainment conglomerate that also owns the NHL’s Philadelphia Flyers and the Wells Fargo Center arena in which they (as well as the NBA’s Philadelphia 76ers) play home games, is a fast-growing player in the sports/entertainment segments, growing revenues over 19 percent in the past year.

A big factor in the surge has been the deal, inked in January 2014, to provide the company’s Everything’s Fresh program to the catering and concessions operations at Oakland’s O.co Coliseum, the only venue left in the country that is home to both Major League Baseball (Oakland Athletics) and NFL (Oakland Raiders) franchises. Late last year, that deal was expanded to include retail merchandise sales as well.

Ovations also worked with client California Exposition to build an 8,000-seat soccer stadium, Bonney Field, for the Sacramento Republic FC MLS team that not only produced sell outs for most Republic games but generated increased attendance at the California State Fair as well.

Aramark sees upticks in healthcare and facilities in fiscal 2021
Apr 26, 2022