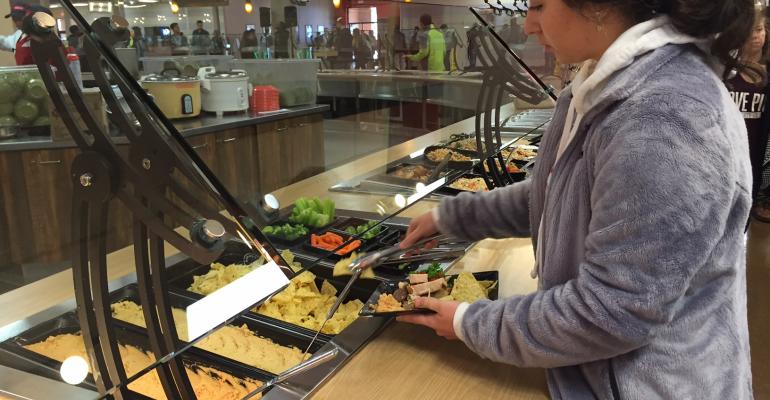 College and university students have an insatiable appetite for this highly customizable and nutritious spread. Full article sponsored by TABASCO&reg; Foodservice.

Hummus’ popularity is gaining serious momentum. In response, colleges and universities are featuring new recipes, dedicated hummus bars and encouraging students to incorporate hummus wherever and however they’d like.

KSU’s dining hall, The Commons, features a dedicated hummus bar loaded with a variety of fresh veggies—many of which are sourced from its campus farm—and pita bread. The bar raises the bar on the traditional chickpea variation with spreads including garlic hummus, red pepper hummus, cilantro hummus, black bean hummus and even curry hummus. Each variety is finished with a drizzle of KSU’s specialty olive oil—sourced from Montepulciano, Italy—and garnished with fresh chopped herbs.

“Students love eating hummus with fresh veggies, especially in the summer months when we have an abundance of produce from our campus farm,” says Coltek. “What makes our hummus unique is that it is always made-from-scratch with high quality ingredients.”

KSU’s hummus bar is available to students for lunch and dinner, with many opting to use the different spreads on sandwiches in lieu of mayonnaise, on bagels in lieu of cream cheese, or as a standalone meal.

Liberty University, Lynchburg, Va., also has a dedicated hummus bar serving both the traditional chickpea variation as well as a roasted red pepper version. Both are house-made and served alongside fresh vegetables, legume and grain salads and vegan chips.

Lowe works with Ms. Betty (as she’s affectionately called by students) on drumming up new and interesting hummus recipes. “We made an avocado hummus for a food demo focusing on healthy fats, and pumpkin hummus to celebrate the conclusion of our wellness class,” says Lowe. “We’re also experimenting with a dessert hummus to add to our hummus bar.”

“Hummus is a good source of protein and energy. It can be eaten as a meal or snack and it acts as a good nutritional source,” says Robin Quay, Liberty’s Registered Dietician Nutritionist.

“Desire for any menu item tells a lot about students and the campus for which food is being provided,” says Lowe. “The world is shrinking, meaning more foods historically reserved for the well-traveled or adventurous are now mainstream. Hummus is simply prepared with minimalistic and easy-to-pronounce ingredients, conveying the honesty in preparation and origination. More so than ever before, our students are culturally diverse, interested in expanding their palates, and wanting to do so in simple, affordable and delicious ways.”

“We estimate that about 20% of our students are vegetarian, with even more choosing those items occasionally,” says Director Dawn Herne.

As a result, the school is incorporating healthful vegetarian and vegan options like hummus into all parts of the operation as well as on a dedicated bar a few times a week.

“Hummus has been a staple on our deli bar for years, but we began to notice an increase in popularity and wanted to expand our offering,” says Herne. “Currently, we serve our hummus bar two days a week, with four different types served each time.”

Hendrix strives to try to have a variety of color and also consider allergens when determining the hummus rotation. “For example, we might serve pesto hummus, which has a nice green color, but contains dairy, alongside red pepper hummus, which also has a nice red color, but does not contain dairy,” says Herne.

Hendrix’ hummus menu features the following variations: Greek, green herb, guac, Italian, pesto, classic, southwest, sweet potato, and tapenade. Most are made with a traditional chickpea base, but some feature black or white beans instead.

“The sweet potato is a fairly new addition,” says Herne. “It features chipotle peppers and has a nice spicy undertone that has been popular with students. The southwest and guac varieties are also favorites.”

The self-serve design of the hummus bar allows Hendrix students the creativity and freedom to use the hummus however they like.

“Students are continuing to explore global flavors and wanting to branch out and exercise imagination when selecting their meals,” says Herne. “Hummus is another piece of that puzzle; it really is a blank slate that can be mixed and matched with all types of ingredients and cuisines resulting in unique and delicious flavors.”