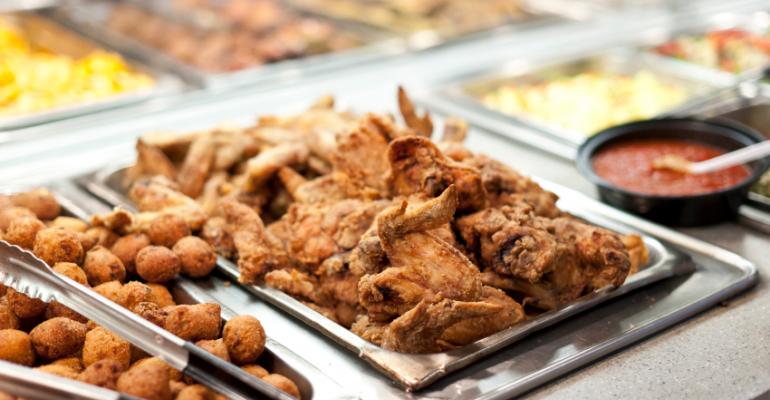 Nothing speaks to a homesick college student more lovingly than homestyle comfort-food.&nbsp; Sponsored by TABASCO&reg; Foodservice.

In the south, southern food isn’t a trend—it’s a way of life.

“Part of the benefit of attending Tulane is experiencing the local food culture,” says Travis Johnson, District Executive Chef at Tulane University in New Orleans, La. “Because New Orleans is filled with a rich culinary history, we become part of that history by introducing our students to different cuisines they may not have at home. The melting pot of ethnic and regional food specialties is distinctive and exactly what the south—and Tulane—are know for.”

“We try to follow the seasons by having a warm weather and cool weather cycle menu with a focus on freshness and from-scratch items wherever possible,” says Bryan Varin, Interim Director of Food Services at the University of Georgia (Athens, Ga.). “We try to let the seasons guide our menu choices in terms of fresh vegetables and fruits.”

While UGA students enjoy the global cuisine offered by the school, they gravitate toward Southern fare.

“It helps that southern foods fit in all areas of our menus from breakfast through dinner,” says Varin, who was previously the Associate Director of Food Services for Meal Plan Operations at UGA before being named Interim Director. “Some of our most popular items include biscuits and gravy, smoked bbq, fried chicken, cornbread, grits, sweet tea, banana pudding, coconut cake, peach cobbler and fried green tomatoes.”

At Tulane, Southern and Soul food is so ubiquitous that it’s hard not to find something in that category no matter which of the school’s 20 different dining establishments you visit.

“We make 90% of our products in-house,” says Johnson, who has been with Tulane for five and a half years and with Sodexo, Tulane’s dining services provider, for twelve. “We create a special type of fusion cuisine across our different concepts because we’re feeding a diverse population that largely value regional and local flair.”

“One dish we’re especially proud of is our red beans and rice, slow-cooked and hearty,” says Johnson. “We serve it on Mondays, as local tradition dictates, and we have catfish on Fridays for the same reason. When we get into Mardi Gras season, it's king cakes all over campus. We also incorporate a few of the other Southern favorites from time to time, such as crawfish Monica, jambalaya, and shrimp Creole.”

“One of the ways we celebrate Southern food is by challenging chefs on our team to bring their own family favorites into our cooking competition, Bruff's Kitchen,” says Johnson. “Our employees often use recipes that have been passed down for generations as their Bruff's Kitchen dish. We're in our sixth season of Bruff's Kitchen, so we've celebrated a lot of those good down-home dishes by now.”

According to Johnson, the flavor profiles of traditional southern dishes haven’t really changed over the years, but chefs are instead looking for healthier ways of making these dishes.

“Traditional New Orleans-style food is very heavy, stick-to-your-ribs sort of food that's meant to satisfy you for long periods,” says Johnson. “The recipes call for a lot of oil, butter, cream, and heavy seasoning. Our chefs are getting creative and experimenting with some lighter ways of cooking these cuisines and still keeping the flavor profile. For example, instead of using cream, we might use half-and-half or whole milk.”

Even so, when Tulane serves up its famous Southern-fried chicken on Wednesdays, students line up down the street and around the corner just to get a piece.