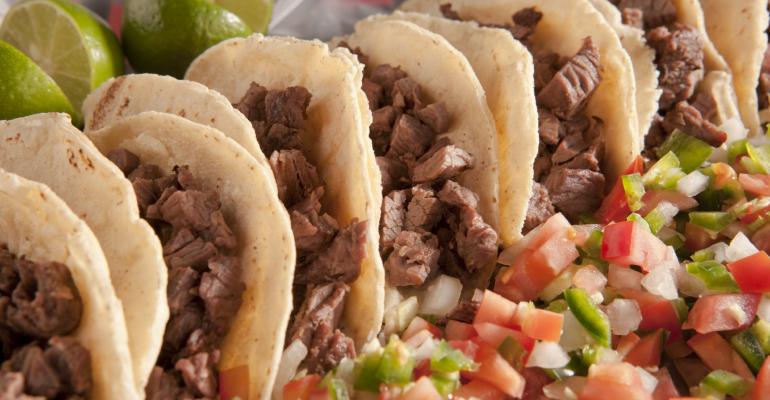 As food trucks, fusion cuisine and comfort foods continue to gain momentum on college campuses, the once lowly taco is now all the rage.

“They have an eatability that students identify with,” says Damien Zedower, Executive Chef at Babson College (Babson Park, MA).

Dating back to the 18th century, tacos have jumped from the Mexican silver mines to an icon for a generation of adventurous eaters looking to satisfy their craving for big flavors served in a convenient, customizable, portable medium.

There are five traditional taco styles—soft shell, hard shell, puffy, flautas and taquitos—that feature any number of fillings ranging from traditional to modern. But with all things trendy, especially with college students, the variations are seemingly endless.

“Tacos allow chefs to be super creative, featuring combinations that might not work in any other vessel,” says Zedower.

Tacos play well with any number of cuisines and ingredients, too. A sampling of elevated options might include pan-seared jalapeño fish tacos with a slaw spiced with TABASCO® Sauce; a spicy Korean pork taco with soy lime vinaigrette; or even a short-rib-pastrami taco.

“Tacos are like a blank canvas,” says Zedower. “They allow students and chefs to step outside their culinary comfort zone.”

At Babson, tacos range from traditional to exotic with students enjoying both applications equally.

“We’ve done everything from a Kimchi beef taco, topped with a spicy aioli and some slaw to a more traditional pulled pork taco topped with guacamole and pico de gallo,” says Zedower, who came to Babson earlier this year.

Tacos have more flexibility than burgers or sandwiches. But they still play within students’ safe zones. “If we tried to serve an exotic meat on a sandwich, nobody would touch it,” says Zedower. “But when it’s served as a taco, they love it because it’s familiar and approachable.”

When building tacos, Zedower considers the vessel, the protein, the spread and condiments and the heat in that order. Once he determines the vessel—soft tacos, hard tacos, flatbreads, and bao buns are some of his favs—he focuses on the protein.

“Because you only have four or five bites, you have to make sure the flavors of your protein have an impact,” he says. “At the same time, they need to play well with the other components.”

Zedower balances all sorts of proteins in tacos at Babson, menuing everything from lobster to lamb.

“We did a taco recently that featured a harissa-rubbed lamb slow-roasted on a rotisserie,” says Zedower. “We topped it with a fresh cucumber yogurt sauce and a slaw made with arugula and herbs, like cilantro, oregano, basil, and preserved lemon.”

The lamb tacos went over so well, they sold out before the end of service.

The spread can be any type of sauce, explains Zedower. He’s used everything from traditional guacamole, made-to-order, to hummus to yogurts and salsas.

For the heat, Zedower looks at all the different chilies and hot sauces on the market. They can be incorporated in any number of ways, so long as they don’t overwhelm the palate.

Tacos are great for breakfast, too. That Tex-Mex assemblage of egg, cheese, potato, beans and meat tucked inside a flour tortilla is fast becoming a get-up-and-go favorite for students across the country.

From a back of house perspective, tacos are an especially smart menu item as they have a low food cost and the bulk of the work is in the mise en place. Assembly is then done a la minute allowing students and staff to personalize their tacos to their exact taste with a wide range of condiments ranging from guacamole and salsas to hot sauces and vegetables.

“Tacos allow you to cross utilize products and ingredients and also use up leftover inventory in creative ways,” says Babson. “They can definitely help to keep food costs in line while pleasing customers and allowing you to be creative as a chef.”