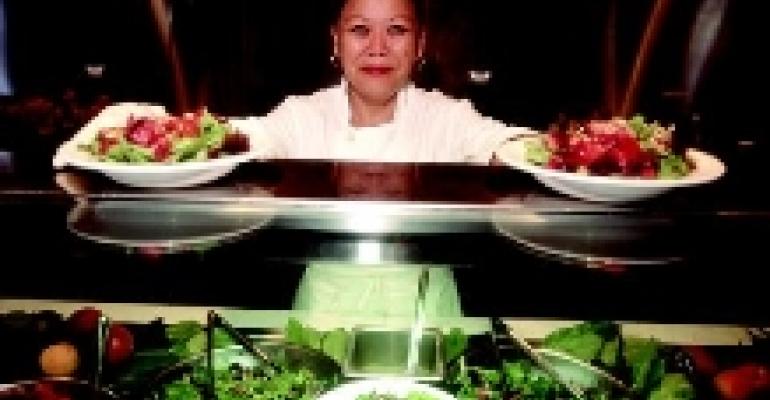 The Art of Just-in-Time (or is it science?)

For onsite foodservices to profitably compete in the current marketplace, it's practically de rigueur to offer some sort of display, freshlyprepared just-for-you-style of meal presentation, whether it's on a daily basis or an occasional promotional feature.

But how do you achieve ever-greater production and choices, given rising labor costs and limited skill levels in the kitchen? Savvy operators have come up with innovative and efficient ways to centralize labor on the prep side so they can streamline efforts on the front end.

Student power
"It's a science, in a way," states Ken Toong, director of dining services at the University of Massachusetts at Amherst. He should know. Toong has fine-tuned and balanced his production and systems to allow for numerous just-in-time options for the 11,000 students enrolled in the university's continuous dining (7 am to 10 pm) meal plans.

"For instance, we know the Tuesday/ Thursday class schedule is heavy, and the majority of students will come in at 12:30. So we can start to do a little bit ahead for the volume, but the quality of the food plated and ready to pick up on the warming tables has to be visually equal to and taste like that which they'd get if they waited for the order - or else it doesn't go over," he says.

Toong has taken a multi-level approach to the challenge. Cook-your-own stir-fry stations he implemented a few years ago save on labor because the students can prepare their rice and noodle dishes themselves. A student worker is always positioned at each of the four stations on campus, to oversee and to be on hand to cook for those who don't wish to go it alone.

"By using student labor at this and other display cooking stations, where they're just assembling prepared items, we save on labor costs," Toong says, noting that student workers earn about $7.50 an hour.

Six choices of vegetables (some blanched, some raw), two pre-cooked meat options and plenty of bottled spices and sauces allow the students to quickly prepare their customized meals in large frying pans over 8 to 16 butane cookers. At any time, 20 to 25 pans are ready to go, with certain ones reserved for vegetarian preparation. Student runners switch out the used pans and replace them with fresh ones.

In the fall of each year, chefs and extra staff preside over each of the cook-your-own stations, showing incoming freshmen how to properly prepare their dishes. Toong uses local farmers plus some large produce suppliers to provide pre-cut vegetables, specifically diced in small sizes so that they cook up more quickly. He purchases some precut, frozen protein selections, but cooks everything prior to moving it into the refrigerated units under the stations' counters.

"Because of liability, we have to precook all the meat, chicken and shrimp, but the chefs explain that to the students, and tell them to put it in at the end, just to heat through," he notes. A chef shows up once a week at each station to introduce a new technique or ingredient, and that "builds excitement for the students, and keeps their interest in it," Toong explains.

Conversely, Toong finds that when he provides a typical self-serve option like a baked potato bar as a freshly-prepared, justin-time offering, with toppings already added, "the students will pick those much more often than they'll prepare one for themselves from the bar," he says. "What they want is something that looks good, tastes good and is fast. So when we assemble potatoes with the most popular toppings, like broccoli and cheese [according to surveys and computer tracking], they love it. They know it's just been made, and it's faster than going through the bar."

This spring, Toong planned to test a justin-time approach to French onion soup, sending the individual, cheese-covered bowls through an impinger oven as students approach.

"I really strive to make sure that every item we purchase can be used in multiple applications," Victory says. That extends to prepared and packaged, roasted vegetables, frozen stir fry products, bottled sauces and other convenience items. "I'm a big believer in speed scratch. If it takes more than three steps to produce it, we won't."

All items for the display cooking are fully prepared in the kitchen and kept in a warming box or cold well at the station until customers place their orders. Frozen vegetables get a hot water bath, and fresh, raw produce may be quickly blanched. But all meats are completely cooked before being transported to the station.

"We tried par-cooking the meat, but it just took too long to make each serving," Victory explains. To prepare the sizzling salads, for instance, Victory notes that "we have an induction cooking system set up, so all the server has to do is just toss in the customer's selected protein item, already cooked and kept warm, pour over olive oil in the skillet or wok for the sizzle effect and place the hot meat on top of their choice of three salad greens and toppings. It takes about a minute and is a huge draw, since the display cooking area is the first thing you see when you enter the cafeteria, and the aroma draws in the customers."

What's more, display cooking dishes cost $2.00 more than the normally-priced menu items, yet require no extra labor. "We just pull a person off another area at that time," Victory explains. "So when we move a typical 250 orders of the display cooking option, that's an extra $500 a day in pure profit."

Normally open from 11 am to 2 pm, the cafeteria will extend its hours, should Victory find extra prepared product on hand by two o'clock. "By staying open a little later on occasion, we get rid of the remaining product, so there's no waste," he says.

One slightly tricky area is the pasta station, where it's a challenge not to overcook the noodles when feeding large numbers of customers. Victory's answer to the problem is to use heartier-style pasta, such as fettuccine or penne, or even whole wheat versions (particularly popular during the low-carb craze) that hold up better. "We never use angel hair or regular spaghetti," he emphasizes.

On display
The University of Missouri at Columbia opened a new Plaza 900 dining facility last fall, and one of the most popular draws is the "On Stage" area, where customers can sit on stools surrounding the open kitchen in the middle of the servery to watch their meals being prepared in front of them.

Explains Director of Campus Dining Services, Julaine Kiehn: "For breakfast, we prepare omelets to order there. At lunch and dinner, we may be making wraps, fajitas, pasta entrees, burritos, quesadillas, salads tossed to order, fruit kabobs, crepes or another concept. We tried to put items on the menu that lent themselves to this type of preparation."

For students who can't wait around for a made-to-order item, a plated-to-order service features two choices (meat or vegetarian) daily that are already prepared and kept warm, but plated up as students place their requests.

Lots of speed scratch and pre-prep efforts go into the new concept, some of it done a day ahead, according to Kiehn. "We use some convenience products, such as pre-cooked, pulled or diced chicken, fajita meat, preprocessed veggies, and frozen crepes. We precook any raw meat, and par-cook the pasta."

In coordinating the new approach, Kiehn notes she has not had to cut or add staff, "but we've shifted things around a bit. We've got one person who chops, slices and dices the vegetables and meats we prepare onsite, so that all cooks do not need to perform this function, and can focus more on the combining of ingredients and the actual food preparation."

But what's really changed, Kiehn says, is the staff's attitude. "Now they're right out front, on display, and although they were a little scared about it at first, they've grown to love being around the customers so closely."

This style of cooking doesn't require extraordinary proficiency, either, she adds. "The skills involved are pretty basic-sautèing or assembling items. It's not rocket science."

Affording the expertise
But when a little more advanced or sophisticated type of display cooking is called for, some operators have found interesting ways to defray the extra cost of such expertise.

At Flik International, a division of Compass Group, Bill Chodan, vice president of culinary, sends a chef out twice a year in a "traveling booth" to introduce emerging ethnic foods to various sites (see pictures above).

"We'll train a chef in the preparation of certain ethnic cuisines, like Brazilian, Indian or Moroccan, for instance, who will go from account to account to teach them how to carry it out," he explains. "People are willing to pay a premium price for that kind of choice, and the increase we get in sales for those occasions covers the chef's travel and labor costs."

Laura Marotta, cafeteria and catering manager at Gwinnett Medical Center in Lawrenceville, GA, found her solution for offering high-end, labor-intensive display cooking choices by using culinary school interns to do all the work.

"We have the interns present gourmet meal preparations about once every other week," she says. "It's free labor for us, good training for them, and increases the variety and customer satisfaction in the cafeteria."

The interns' specials have ranged from grilled-to-order salmon to Italian lemon chicken, fried catfish and smothered pork chops. "Sales increase by about $500 on those days," Marotta notes.