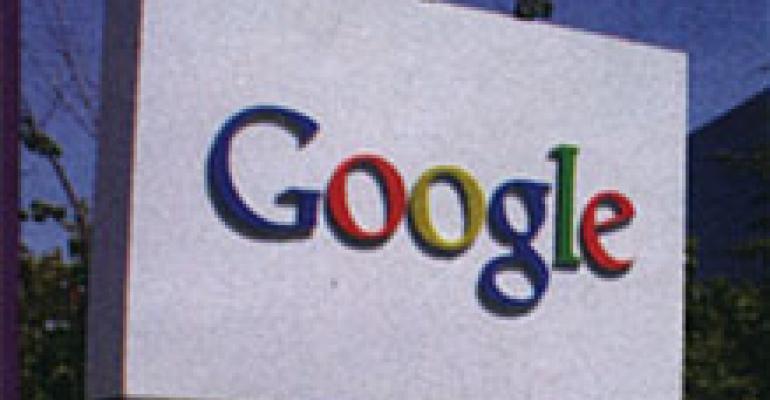 There's Always A Free Lunch
Last November, when Restaurant Associates opened Hemispheres and 5 Borough Bistro, the cafes at Google's new digs on Ninth Avenue in New York City, the dining program there once again demonstrated that this is a company where food plays an integral role in a unique corporate culture, traditions and worklife.

The menu there, overseen by Executive Chef Gary Gibson, ranges from the eclectic to the iconic. On a typical day, employees get to choose from among organic burgers made from a half dozen protein sources, grilled yellowfin tuna filets, a raw vegetable bar and vegetarian entrees that range from Sweet Potatoes with Peanuts to Vegetables with Coconut Cream. Dessert options are just as extensive, with delicacies like Reduced Fat Cinnamon Meringue Roulade, seasonal berry tarts and fresh-made gelato. And, just like at Google's Mountain View, CA, headquarters, the food is provided free to employees every day, all day long.

"Food is the number one employee-rated benefit at Google," says Global Foodservice Manager John Dickman. "And whether it is this benefit or another, the founders' goal is to strip away the personal needs of employees so they can focus on business objectives."

That philosophy, executed consistently and masterfully since the company formalized its meal benefit in 1999, is what earned Google the "Best of Show" designation in FM's 2007 competition. From station and menu development to new cafe design, Google and its contract partners have excelled in virtually every category FM's competition recognizes.

In a larger sense, during an era in which employee benefits generally have been downsized, downplayed and under-valued, the company has set a proof-positive example for other organizations. Google has clearly made foodservice a premier employee benefit that helps the company attract and retain top-tier talent in one of the world's most competitive human resource markets.

A demonstration of scaleability
It is also a business sector where a key demand is for strategies to be "scaleable." Over the last decade, Google's foodservice program has met that criteria just as clearly as has its business focus on providing search functionality.

When FM first visited the company at its original oﬃces on Bayshore Drive in 2001, executive chef Charlie Ayers was managing a program that served 300 employees. That number already represented a ten-fold increase since he'd joined the company three years earlier. When we again visited Google's new headquarters in Mountain View in 2004, the company had grown again more than five fold and was serving about 2000 employees from a single large cafe (you can find links to both earlier stories at food-management.com/fm_innovator/fm_imp_6581).

Today, Google operates 15 cafes on that campus, each with its own theme, menu and context. A few examples: The American Table, focusing on regional American cuisine and Native American ingredients; Pintxo 47, a Tapas restaurant emphasizing Basque ingredients; and Fourteen, which builds on the 14 elements of taste described by Gray Kunz in his book, Taste.

Each is run by a member of the Chef's Collaborative, which is structured so that "the chefs work together, but also compete with one another for Google customers in an open market on the campus," says Dickman.

Google now runs dozens of locations worldwide and serves well over 10,000 meals to employees and guests on a typical day. That number continues to grow: new cafes will open later this year in Dublin, Beijing, India and Zurich.

"Our cafes are social gathering places and everyone eats there, including our executives," he adds. "Meals are a community experience at which Googlers share ideas and break down barriers. Food provides a common bonding opportunity across the organization."

Seating is designed to let employees gather in groups and tables are often re-configured by them to facilitate discussions at lunch, he adds. "Micro-kitchens" stocked with various healthful snacks like cereals, nuts and dried fruits, long a feature of most Google facilities, are attached to media lounges where employees can read, play video games and catch up on news during breaks from intense work sessions.

Dickman says that while the company wants to ensure "comparability" of the foodservices offered across the company's facilities, food offerings are customized based on the tastes of the local employee population. "As part of the basic ‘footprint,' we want the food to be on the healthy side and to introduce people to nutrient-dense foods," he says.

Beyond that, "we want people to look at food as more than just fuel," he adds. "We want to introduce them to its origins, its seasonality and its global traditions. We want it to reflect the same global diversity that our company does."