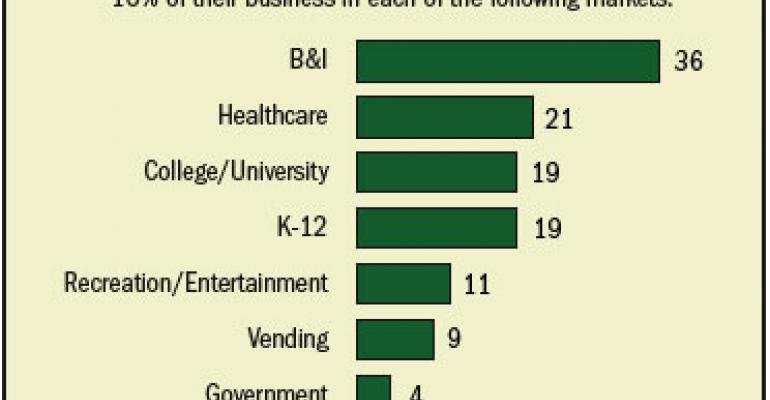 FAME (Food & Management Enterprise Corp.) generates over three quarters of its revenues from managing dining operations. Another 15% comes from catering operations. The company has eliminated trans fats from its offerings in the past year.

Meanwhile, it added to its selection of panini sandwiches, salad bar items and other fresh, healthier foods. Clients include the New York State Office of Mental Retardation & Developmental Disabilities in Albany.

After operating exclusively in Texas, Prince recently entered neighboring Louisiana. This was accomplished with a contract to provide dining services to two Gulf States long-term acute care hospitals in Bogalousa and Houma.

Most of Prince's business is in the healthcare and B&I segments. However, it has also made inroads into K12 in recent years. Its clients include Boeing, Lockheed-Martin, Samsung Semiconductor and Texas Petrochemicals along with 22 healthcare facilities (including the two in Louisiana).

Williamson was founded over 60 years ago as a restaurant and catering enterprise. The company now operates in 41 locations in multiple segments, mostly in the Delaware Valley market. However, it also recently made a thrust southward for more business.

Quest is exclusvely a K-12 specialist operating in both public and private schools in Illinois. It recently rolled out its On Track health and wellness station program. Clients include the Fremont, Glenbrook and Proviso Township public school districts as well as St. Ignatius College Prep and St. Patrick High School in Chicago and Notre Dame High School for Boys in Niles.

Linton's traces its history back to a restaurant opened in Philadelphia in 1890. It later became a chain that at its peak in 1939 had 26 units around the city. Today, Linton's operates as a manager of onsite dining operations and supplier of preprepared meals. It is also a distributor of nonfood items like disposables, cleaning supplies, office products and medical supplies to some 225 locations, which constitute about a fifth of the business.

In the past year, Kosch introduced customized branded concepts for its sites and developed a branding strategy for its school clients. It also rolled out a new pizza program and is test-marketing some new General Mills breakfast products. It also developed a branding strategy for schools. The segment currently constitutes only a small part of its overall business however.