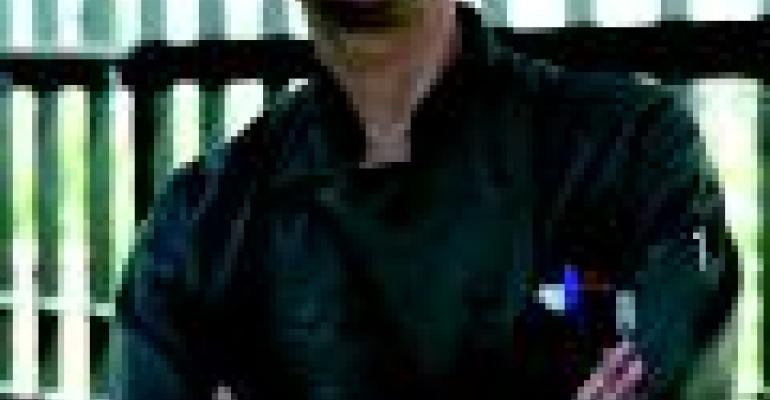 Food to Spur the Imagination

Osvaldo Tomatis is not a movie star, he's a chef. Yet, today, he has a starring role with one of Hollywood's most successful movie production companies. How he got there resembles one of those Hollywood "discovery" stories.

It began four years ago, when Tomatis was executive chef at the Il Fornaio restaurant in San Francisco. One day, a big fan of the restaurant sent word he wanted one of its chefs to come and run his company's new in-house cafè.

Pixar had recently moved to a new location and Jobs wanted an in-house foodservice that could provide employees a relaxed place to grab a meal and bounce ideas off each other. The menu, however, had to live up to his exacting standards. In other words, it had to be a lot like the food at Il Fornaio.

The obvious solution? Get someone from Il Fornaio and put him in charge! Tomatis was approached with an offer through Cafe Manager Francesca Longoni to join the Pixar team.

"When you get a chance to come work at a company like Pixar, you have to listen," Tomatis says. Of course, it didn't hurt that the position would give him almost complete freedom with the menu along with a generous budget to procure high-quality ingredients. Combine that with those enviable onsite foodservice hours, plus the chance to work for one of the hottest companies around, and (we have to guess) it wasn't a difficult decision for Tomatis. He took the job and has never regretted it.

Once you meet Tomatis, it's easy to see what it is about him that so appealed to Jobs, above and beyond his obvious culinary talent. He has an easy-going nature that meshes perfectly with the techno-playpen culture of a place like Pixar, where associates are developing cutting-edge technologies to create...well, cartoons.

Even though he's lived in the Bay Area since 1978, Tomatis retains the mellifluous accent of his native Northern Italy. It gives a Seven Nights in Tuscany aura to his discussions of the menu. A man with an obvious passion for food, he had worked exclusively in high-end commercial restaurants before taking Jobs up on his offer.

That experience shows at Pixar, where Tomatis oversees a 12-person dining crew that churns out fresh, from-scratch meals for the company's 800+ onsite employees.

External competition exists but is limited. Emeryville, the city in which Pixar is located, sits just north of Oakland on San Francisco Bay. It has some chain restaurant units scattered about, but much of the community is a patchwork of industrial buildings and working-class residential areas morphing through the early stages of gentrification. Berkeley with its many dining options is about 20 minutes away, an impractical hike during the typical lunch hour.

"Steve wanted a place where people can relax and share ideas in a relaxed environment over good food," Tomatis explains. As a result, the 150-seat Pixar Cafè at mid-day is not only a buzzing hive of creative minds interacting while lunching, but atypical in the B&I segment in that it generates very few take-out sales.

"Most of our diners eat in the cafè," Tomatisnotes. "We really don't have much grabandgo or anything like that."

In addition to his duties overseeing the everyday cafè operations, Tomatis is responsible for managing catered events at Pixar. Most are either publicity events centered around movie projects or charity functions, but the biggest event is an employee function that can draw more than 1,500, including friends and family.

This is the annual Motorama employee car show, which is held each summer and for which Tomatis prepares a barbecue menu that he smilingly describes as "racetrack food, only better."

The Pixar complex includes a 235-seat movie theater where preview events and the like are often held for special guests. The food and beverage at these functions generally is set up in the big central lobby with buffet stations.

Food With Flair
Most of the 500-some meals served on an average day at Pixar's cafè come during the lunchtime daypart, which officially extends from 11:30 am until 2 pm, although it often stays open a little longer to accommodate late lunchers. A self-serve coffee bar, complete with espresso machine, stays open round the clock and is free to all employees.

Breakfast is served between 7:30 and 9:30 am but only sees a couple dozen covers on an average day because many employees get in later and prefer to get right to work. Most are "continental" meals centered on pastry, though Tomatis also offers basic hot breakfasts like omelets and frittatas.

The other onsite food option is a free, 24-hour cereal bar located directly across the central lobby from the cafe (see sidebar above). Tomatis jokes that the free cereals represent impossible competition for his food, which, while subsidized, is not free.

Hardly. In fact, the check average of around five dollars doesn't begin to represent a fair price for the cavalcade of gourmet-quality meals the cafè turns out every day. The standard menu features an array of sandwiches, pizzas, pasta dishes, salads, soups and other delights. There is even fresh sushi, made onsite, three days a week. All this is supplemented by daily specials dependent on what ingredients Tomatis finds that meet his standards for quality and freshness.

All entrees are available in half and full portions to accommodate different appetites.

The menu is actually a somewhat truncated version of the bill of fare Tomatis first introduced three years ago. Coming from a commercial background, he originally felt he had to offer a wide range of choices to accommodate every preference among the in-house clientele. "We tried to have something for everybody's taste," he recalls. "Now, the menu is more streamlined, but with the made-to-orders and willingness to fill special requests, we can still serve everybody with the kind of food they prefer."

Orders are assembled according to customer specifications at the saute and grill stations and the sandwich bar. Tomatis says the cafè puts a premium on preparing food to order. Customers either make their requests verbally when they come down or can pre-order electronically for later pickup.

About a third of the ingredients in the meals are organic and/or locally grown. "We try to get as much of that kind of food as possible," Tomatis says. "Fortunately, around here this is not difficult."

Vegetarian and vegan options are always available, but even the meat-based dishes emphasize a healthful profile. Grilled fish is a menu staple, for example.

A variety of ethnic cuisines are featured regularly. Naturally, given his heritage, Tomatis often has Mediterranian favorites like risotto, fresh pasta (made from scratch whenever possible), piadina (a disc-shaped Italian bread made with pasta dough) and paillard (a thin, flash-cooked piece of beef or veal), as well as tofu dishes, hummus, jerk and other ethnic selections from around the globe. Specialty cheeses and meats provide variety to the sandwich bar mix.

Of course, for diners who prefer standard American favorites, there are always the burgers, a salad bar, grilled chicken sandwiches and French fries, all made fresh with high-quality ingredients. The beef is an all-natural product from grain-fed cattle while the fries are cooked in rice bran oil for a nutritional health profile that also makes them certifiably vegan. The salads feature as many organic and locally-grown ingredients as possible.

The modestly sized but centrally-located cafè sits just off the Pixar complex's main lobby, not far from the front desk. The lobby itself is a massive space not unlike an airplane hanger that serves as a meeting space, display area and movie studio, depending on what's required that day.

Posters, life-size figures from Pixar films and props sit in various corners and hang on the walls. Employees flitting about on scooters reinforce the atmosphere of ultracasual cool.

The cafè's design consists of a single row of stations centered around the wood-burning pizza oven that Jobs made a special point to get installed. He remains a big fan, eating in the cafè on the (increasingly rare) occasions he is in town. Tomatis says the boss is not one for exotic demands but—hardly surprising for a man renowned for creating computer hardware known as much for its elegance as its processing capabilities—Jobs is exacting about aesthetics in food as much as in computers and movies. "He's not a vegan but his diet is very clean," Tomatis observes. "He's very particular about his food. It doesn't have to be fancy, but it must be fresh and it definitely has to look good."

No problem for a Tomatis-run cafè, where every selection is a visual as well as gustatory pleasure.