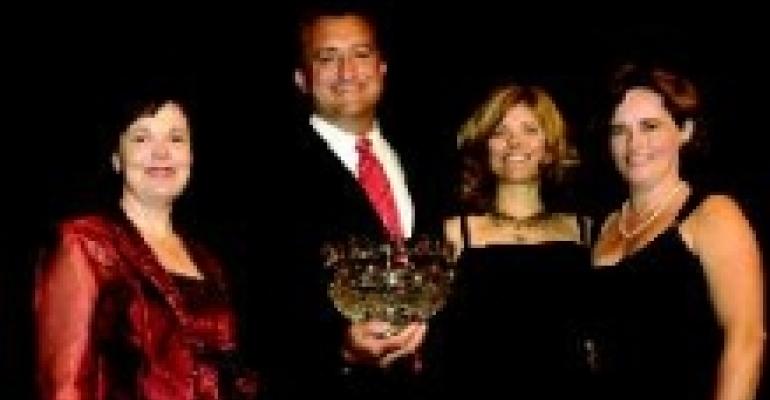 Brandishing wallets of freshly-exchanged Canadian looneys, smiles and NACUFS-inspired North-of-the-Border enthusiasm, hundreds of members of the National Association of College and University Foodservices descended onToronto during July 25-29. They were there to participate in the educational sessions of the group's National Conference, browse vendor exhibits at its exhibit hall and marvel at the expertise of college chefs who competed in the now-traditional NACUFS Culinary Challenge.

The event was held in conjunction with the conference of sister association CCUFSA (Canadian College and University Food Service Association), giving attendees the chance to compare notes with a even wider mix of fellow operators and to check out a broader mix of foodservice vendor products than usual.

In annual business activities, outgoing NACUFS President Sharon Coulson passed the leadership gavel to incoming president Russ Meyer, associate director for housing operations and dining services at the University of Nevada, Reno. David Annis, executive director of food service at the University of Oklahoma, was installed as president-elect; Janet Paul Rice, director of auxiliary services at Concordia College, was installed as the at-large director; and Jane Grant-Shambaug, director of auxiliary services at Concordia, was appointed the 2007 National Conference Chair.

David Prentkowski, director of food services at the University of Notre Dame, was honored as the 2006 recipient of the Theodore W. Minah Distinguished Service Award, NACUFS' highest honor, in recognition of his enduring contributions to the industry and the association. Kim LaPean, marketing coordinator for RSSP at the University of California-Berkeley, and Wendy Barth of Rich Products Corporation, each received the Richard Lichtenfelt award for outstanding service to the association.

Ron Inlow, former vice president of auxiliary services at the University of Richmond, was named a NACUFS Distinguished Lifetime member.

The annual NACUFS Culinary Challenge, sponsored by Unilver Foodsolutions, is now in its sixth year and remains a highlight of the conference. It is classified as a K1 Customized Competition under ACF (American Culinary Federation) sanctions. First Place and a gold medal was awarded to Edward Castillo, sous chef at Rice University in NACUFS Southern Region, for his entree: Pan-Seared Chicken Supreme with Porcini Mushroom Sauce.