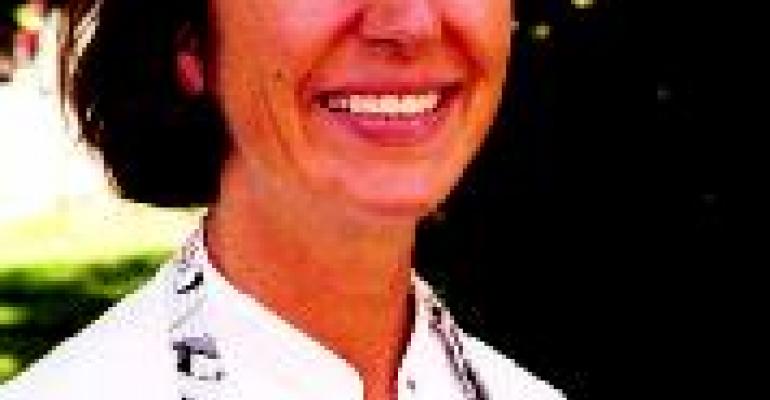 Imagine going to work as a chef each day in a historic stone manor house surrounded by quiet wooded hills, with the waves of the Atlantic lapping the shore close by. Imagine further that you are given free rein in the kitchen, with freedom to create what you want with whatever ingredients you want (as long as the customers like it, of course).

Liz Walkowicz, executive chef for the Mullen Agency, an advertising firm based in the abovementioned stone manor house in rustic Wenham, MA, north of Boston, lives such a professional life. Each day, she and her staff serve about 250 lunches to Mullen employees and guests (the company employs over 400, although many are traveling or out of the office on any given day. Of those who remain onsite, most eat lunch in the cafe).

Everything is made from scratch, including breads, pastries, muffins and even homemade granola. These form the bulk of the breakfast menu on most days, along with fresh fruit, cereals and yogurt (Walkowicz says breakfast participation is 75 to 80 percent on an average day).

Walkowicz, a CIA graduate whose specialty is baking, worked for 15 years in catering in the Boston area before joining Mullen, a "dream job" that gives her the freedom to be creative while affording the kind of time off that allows her to indulge her passion for travel and continuing professional education.

How did you wind up at Mullen?
"A friend of mine had come here to start their corporate kitchen, but it didn't work out for her and she only stayed for about three months. She asked me if I would be interested in taking over. I had been thinking about making a change at the time anyway from the catering work I was doing, so I talked with Jim Mullen, the owner of the business at the time. The one thing I insisted on was that I be able to take a month off each year to travel and recharge so I can do research and keep things fresh. I try to schedule at least one class I can take during these times off."

What did you do before the catering gig?
"I lived in Zurich for a year, and learned a real appreciation for European attitudes toward food, especially using everything instead of throwing things away. As a result, I am very careful about not wasting food here, even though my budget is large enough that I've never had to worry about it. We've even begun to compost so that any leftover food that can't be used in any other way can be composted, and that makes me feel very, very good."

Did you get anywhere else in Europe besides Zurich?
"Yes, I travelled all over Europe at that time. I spent also a lot of time in Italy, and I've returned there, as well as to Zurich and to France, every two or three years since."

Pretty good places to visit for a culinarian...
"Fantastic. One day, I hope to have a place there where I can spend time when I retire, but for now I'm here and loving it."

Are your customers at Mullen fairly adventurous eaters?
"Over time, yes. I feel part of my job is to educate-people. So maybe the first time they don't like something, but the second time, they try it and the third time they might say, 'Hey, this is pretty good!' A good example is a Chile Rellenos that we sear on a flat-top, rather than deep-fry, for a healthier profile. The first time we made them, maybe five people ate them. Now we have to do 50 and hope we have enough. Also, at first no one would eat beans. Now, I serve beans several times a week and people love 'em."

Were there instances where you pushed the envelope too far?
"Tofu remains a hard sell, but we do have quite a few vegetarians, and I always have at least one entree for them, as well as the salad bar filled with all sorts of things, including at least half a dozen different kinds of olives—I'm an absolute olive fan since my days in Italy!"

What food trends are you keeping your eyes on?
"I think Spain is really hot right now..."

Tapas and that sort of thing?
"Yes, and also, despite the unrest there right now, I think Middle Eastern and Indian food. We love making dishes from those regions, especially curries. We even make our own curry powder. I'm also looking at the Mediterranian—dishes from Sicily and some of the other islands like Sardinia. There are some cool foods coming out of those areas right now."

What about you personally?
"I've really been into fish and shrimp tacos lately. I love them because they are so clean and fresh and simple tasting, espcially when accompanied by an interesting sauce. My husband and I have a place in Mexico on the Yucatan where fabulously fresh fish is available daily, and the region's cuisine takes advantage with very simple preparation techniques and flavorings. I love that."