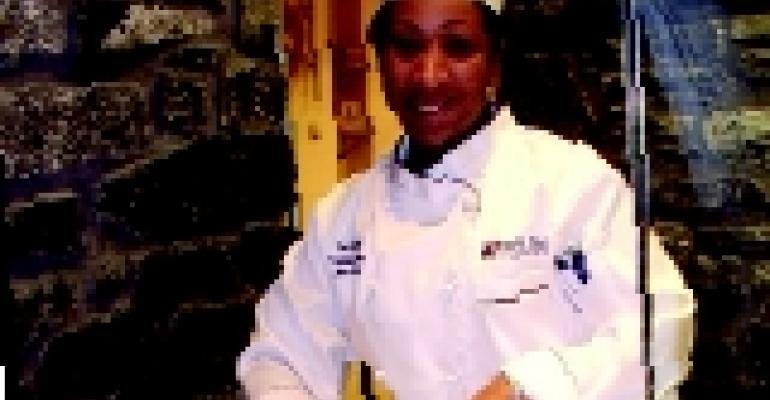 Tia McDonald is a passionate advocate of "keeping it simple," of letting the flavors of the base ingredients speak out without a lot of fancy spicing and sauces. It is a philosophy she developed in a journey that has taken her from the American Southern focus of her girlhood home's kitchen to a parade of primarily European influences in various restaurant career stops and a formal culinary education at the CIA.

After a career in the commercial restaurant world, McDonald joined Aramark six years ago. This fall she was named executive chef for Aramark's operations at the University of Pennsylvania, where she is responsible for the culinary direction of four resident dining halls (including one kosher outlet) and six retail outlets. She oversees five other executive chefs and nearly 400 staffers who prepare and serve the food at the various locations. On an average day, the dining department serves some 3,500 board meals and realizes around 2,000 transactions in the retail outlets.

What prompted your interest in cooking?
I started cooking when I was around seven. My family was originally from Alabama, so there's a heavy Southern cooking influence in my life. I was always drawn to it. I grew up in a musical family and there were always people around, and there was always food. The house always smelled of something wonderful and I wanted to understand, even as child, how to get food to smell or taste like that. My mom always made sure that I tasted, smelled and sensed what side ingredients were needed to highlight a main ingredient. She taught me how to complement food.

When did you start cooking outside home?
I started in restaurants when I was 14. When I was 18 I apprenticed with a German chef in Connecticut.

How did that come about?
I was just wanting to learn more. I had just started reading Larousse Gastronomique. I just happened to walk into a restaurant and there was a chef there who was from Berlin. I told him I was looking to learn more and he took me on. I learned a lot about German and Swiss cooking. Then I went to work in hotels for a couple years before enrolling at the CIA.

Where after graduating?
I went to Los Angeles and worked for a catering company for about a year before returning to New York City. I was at Oceana Restaurant for two years and then went back to Connecticut and worked at Peppercorn's Grille. It was run by a Sicilian family and I really got a good handle on Italian and Mediterranian cuisine. Just the way they prepared their artichokes, for example, with a slow braise. It was simply prepared food but it was so delicious. I got such a good sense there of just keeping it simple. I can't emphasize that enough...

Is that where you first got the appreciation for simple preparation?
It was something that developed as I went along. I also got a good sense of it at Oceana, where we were working with such great seafood. It was very fresh and I was at the point where I was just tasting the seafood raw as it came in. As it developed it became a philosophy: just keep it simple. You don't need tons of stuff to make it taste good.

Did you approach Aramark, or they you?
I approached them first. I had had quite enough of the 90-hour, rev-your-life lifestyle. I never saw my sisters and brothers, never saw my family—I now have six nieces and nephews. I was getting to the point where I really just wanted to move my career ahead, but also start to establish a good work/life balance and pursue other interests as well as develop my career.

What most intrigues you about college dining?
It's such a great opportunity to educate young people who may be the leaders of tomorrow about appreciating great food, about developing their palates.

What changes have you been able to effect so far at Penn?
We're putting more of a retail feel into our residential outlets and we're expanding our local food initiatives. We've already had a local foods dinner in one of our residential locations and we're going to start implementing weekly local food stations in each.

What do you make at home?
My father is a musician who lives in London and travels all over the world. But every time he comes home, despite all the foods that he's tried, he wants the Southern cuisine, the fried chicken and the candied yams and collard greens. Despite the fact that he's traveled and that his daughter's a chef, I make the same dishes every time...