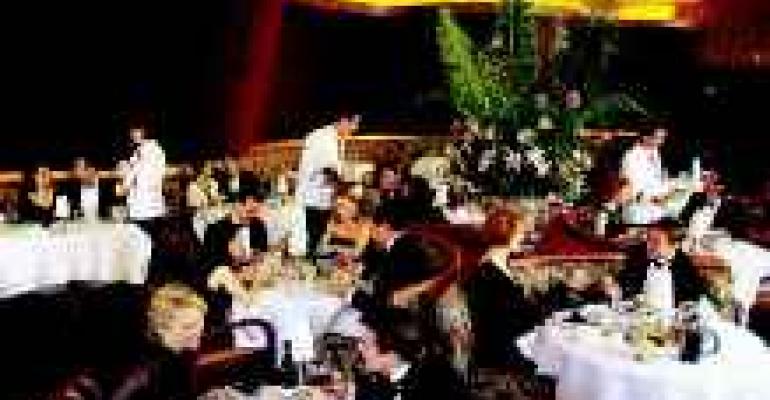 Perhaps the only thing about Restaurant Associates more impressive than its client list is its recent growth in the onsite foodservice sector. That expansion flies in the face of a largely flatlined B&I segment where RA has historically concentrated much of its noncommercial business.

But in the past five years, RA has ascended to the top position in the Manhattan corporate dining market with an annual growth rate of 20 percent. Meanwhile it is also booming in a burgeoning new market—museums, performing arts centers and other temples of the fine arts that form the upper crust of the onsite foodservice industry's "recreation" segment. The growth is fueled in equal parts by RA's reputation for offering cr&ethme de la creme dining services, its deeppocketed and encouraging ownership from Compass Group PLC and the visionary and energetic leadership of Richard Cattani, longtime head of RA's Managed Services (onsite foodservice) division.

Over the past five years, Cattani has led RA Managed Services to more than double its cultural center business, which now stands at 27 accounts. The segment currently contributes around $110 million of the division's $275 million in total annual volume. That's up from $190 million in 2002 and Cattani says he is confident the company will break the $300 million barrier in 2005.

One reason for the optimism is new business RA has yet to open, which Cattani says represents an additional $25-$30 million in annual revenues. "When those are on line, combined with our existing accounts, this will be a substantial business of about $150 million annually," he predicts.

For a company that historically has been known for its exquisite taste in high-end dining, and for groundbreaking innovation in developing emerging new foodservice niches, the expansion in museums, performing arts venues and other centers of the refined arts shows it remains on top of its game.

Picasso envy
Americans are on a recreation spending spree. Receiving a good share of this bounty are the finer arts, refined pleasures perfectly positioned to appeal to an aging, educated population with time to spare, things to see and money to burn.

"People are increasingly sophisticated and want to enjoy the arts," Cattani explains. "But they don't want to have to travel to New York or Chicago or Boston to do it, so there's been an explosion recently in the museum and performing arts center markets, especially in the Sun Belt."

That in turn is driving the building of new facilities to meet the demand and a parallel battle for market share among new and existing centers, focusing not only on the quality of the exhibits and events, but also on the amenities.

"In the past, cultural centers either operated their own in-house foodservice or assigned it to a local operator," Cattani explains. "Food was not considered a major aspect of the experience."

Now, institutions realize they have to offer a broader package that includes restaurant-quality cuisine, Cattani notes. And RA's reputation for fine dining at prestigious arts institutions on the East Coast has perfectly positioned it to take advantage of this growing demand.

In the past five years, RA Managed Services has added an impressive list of clients to its roster, including the National Gallery of Art, the Smithsonian's Cooper-Hewitt National Design Museum, the Cleveland Botanical Gardens, Philadelphia's Kimmel Center, the Central Park Zoo, the Cleveland Museum of Art and the National Museum of the American Indian.

In the next few years, more major venues with RA-managed in-house foodservice are scheduled to open. They include New York's Morgan Library; the Music Center at Strathmore in Bethesda, MD; two more Smithsonian sites, the Hirshhorn Museum & Sculpture Garden and the "Castle," the Smithsonian Institution Building; the Woodruff Arts Center, High Museum and Georgia Aquarium in Atlanta; the Miami Performing Arts Center; Boston's Institute of Contemporary Art; and the Freedom Forum Newseum in Washington, the latter two featuring a collaboration between RA and Wolfgang Puck Catering.

Cattani says six more potential contracts are "in the pipeline" but not yet at the stage where they can be discussed publicly.

When asked if it helps or hurts more to be known as a "New York company" when approaching potential clients in other parts of the country, Cattani laughs. "In B&I," he says, "I don't think our name plays as well in Iowa as it does in New York. But with cultural centers I would say it does, not only because New York is considered the 'temple of art' in this country, but also because the community of decision makers is rather small. So directors in Houston or New Mexico are familiar with all the other centers. They know what we've accomplished and want the same level of quality and attention to detail in their locations."

While the arts market was broadening, RA was getting the resources to compete on a larger geographic scale, thanks to its 1998 acquisition by Compass Group. At the time of the acquisition, RA was still largely confined to New York and surrounding areas, but the "Southern Strategy" implied by the new Atlanta and Miami venues signals the intention and ability to enter new markets, thanks to access to Compass's national organization and capital resources.

Internal Boundaries
While RA's Southern expansion is fairly uncontroversial within the Compass organization, there is a question as to how far it can extend in other directions, given the unique nature of the parent company's approach to the market. Unlike its two global rivals, Sodexho and Aramark, Compass operates under a collection of distinct brands with sometimes-overlapping business niches.

That requires careful delineation of boundaries in order to keep the company from, in effect, competing with itself for contracts.

As a result, there are apparently some understood limits within the Compass organization about spheres of influence.

For instance, about a year after merging with Compass, RA turned over its new footholds on the West Coast—contracts at the Los Angeles Music Center and the San Francisco Performing Arts Center—to Patina Group, which was already active in the West Coast cultural center segment with venues like the Los Angeles County Museum of Art.

"When the partnership came about, it was decided internally that Levy would continue to pursue arenas, stadiums and convention centers while RA would focus on golf and tennis events," is how Cattani explains the Levy agreement (RA does retain its contracts with the Cleveland Browns and Philadelphia Eagles stadiums).

Meanwhile, Patina is best positioned for West Coast business. "We turned the Los Angeles and San Francisco centers over to Joachim [Spichal, Patina's CEO] because he had a management infrastructure on the West Coast," Cattani explains.

Geographic priority also explains why Bon Appetit won the Chicago Art Institute account. It already had a strong operating presence and infrastructure in the Midwest at the time.

In the Tradition
RA's presence in the cultural arts segment goes back decades and reflects a tradition of fine dining in onsite environments that was in many ways always part of the company operating philosophy.

Indeed, RA's first iconic restaurant, the Newarker, was a bone fide institutional foodservice operation—it was located in the Newark, NJ, airport! (see the sidebar on p. 42.)

RA's formal entry into the noncommercial market came in 1969, when it was approached by the Ford Foundation and the Metropolitan Museum of Art, each asking whether the company would be interested in providing foodservice at their sites.

They became RA's first B&I and museum accounts, respectively (and remain so to this day, Cattani notes proudly). But they were side businesses as RA continued to concentrate on its commercial restaurants throughout the 1970s.

"The cultural center business began to pick up steam when we picked up Avery Fisher Hall at Lincoln Center in 1979," Cattani recalls. "Then in 1981, the Kennedy Center became our first account outside New York."

Cattani had originally joined RA in 1969 and worked as a back-of-the-house steward and then director of operations at the Newarker. He left in 1973 to join ARA Services (now Aramark) as vice president of operations in its airport division. In 1981 was persuaded to return to RA as head of a newly formed unit that eventually became the Managed Services Division.

"At the time we had only a handful of B&I clients as well as the three prominent arts locations, and that was the base from which we started to grow the business," he says.

Growth came slowly in the 1980s, though the company did add the American Museum of Natural History, the Metropolitan Opera and the New York State Theater during this period. "Those gave us all the houses at Lincoln Center, and that was a big thing for us," Cattani notes.

Expansion in the onsite segments accelerated after RA was acquired by the Japanese conglomerate Kyotaru, Ltd. in 1990. Managed Services took advantage of the situation by hiring Sirhal as vice president of sales and beginning to emphasize the cultural center business. It picked up the Philadelphia Museum of Art and the Boston Museum of Fine Arts in the next couple years, followed later by the Smithsonian's American and Natural History Museums and Severence Hall in Cleveland.

Cattani cites a number of factors that led to the emphasis shift.

"I think we recognized that there were opportunities in that area to provide restaurant-quality food and service and be a cut above and very different from the competition," he explains. "We got very serious about that and put our efforts behind selling that story."

He notes that many cultural centers previouslyhad fairly minimal onsite foodservice. "We began to professionalize it," he notes. "We capitalized on the culinary side, first and foremost. We were able to introduce some things that were not done before."

Meanwhile, the capital required on the public restaurant side was becoming more difficult to arrange, "so the company started to shift gears and begin to look further into B&I and the cultural centers, and that's how the focus changed."

With some of America's most prominent cultural centers on board, RA also began casting a wider net, securing smaller venues like the Winterthur (DE) Garden, Museum & Library; the Wadsworth Atheneum in Hartford, CT; and the Solomon R. Guggenheim Museum in New York.

"Those were very special venues where we felt that we had the know-how and the talent to make a go of it in these smaller facilities, and catering also played a big role," Cattani adds.

Management repurchased RA in 1996 but two years later it was again acquired, this time by Compass, whose global reach and onsite foodservice business concentration have provided the resources and motivation to take RA's concepts to a wider clientele.

Where it takes it from here is a chapter yet to be written...