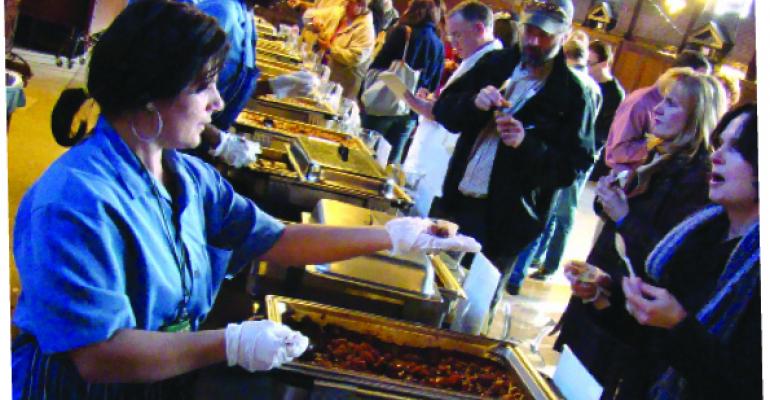 Easy to make in big batches, chili is the perfect fit for friendly gatherings (and competitions).

Everyone from the chief of police to the bulldog mascot showed up to chow down at the 3rd Annual Yale Dining Chili Throwdown.

“It’s a lot of fun, but the competitors also get very serious,” says Ron DeSantis, CMC, Yale’s director of culinary excellence, who served on the panel of judges.

The event is a fundraiser for the United Way. At the latest throwdown, hundreds of people from the university and the community paid $5 at the door and got to sample 24 different chilis, prepared by various campus chefs and home-cooking staff members.

“Each chef has his or her own combo and secret spices, and that makes it all the more interesting,” DeSantis says. 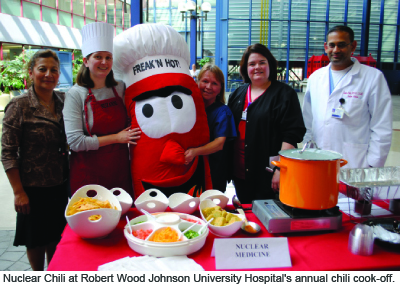 Back to School, Back to…Ski?

One of the favorite ski hills in the college town of Middlebury, VT, is known as the Snow Bowl. And it so happens that a classic chili recipe that’s a great way to warm up after hitting the slopes (après ski) is called “Snow Bowl Chili.” That chili is the center of three promotions throughout the year at Middlebury College.

Meeting new friends on the slopes and mingling over a bowl of the chili has become a huge tradition to welcome incoming first year students who arrive in February at the start of the spring semester as “Febs,” says Bo Cleveland, executive chef.

“A small but lively portion of Middlebury first-years can select to start their education as a ‘Feb,’” Cleveland says. Some of the orientation events take place at the Snow Bowl, where students have a day of skiing followed by a chili dinner. 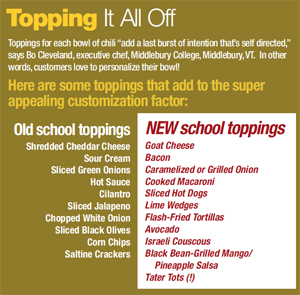 Those who arrive more traditionally in September also get a taste of the chili at the “Welcome Barbecue,” and it’s served during the “Mid Mayhem” event as well, which celebrates the last day of classes in May. The chili also finds a place on the menu frequently throughout the school year.

Snow Bowl Chili is “reminiscent of all good chilis,” Cleveland says, meaning ground beef, beans, tomatoes, peppers and chili powder as the main ingredients. It has been entered in the town’s big annual chili festival in March and draws big lines to get a taste, but hasn’t won a prize “yet,” Cleveland says.

“For a lot of people here, it’s a ‘taste memory’ of learning how to ski as a little kid, then having your parents give you a five dollar bill for lunch in a rustic old lodge,” he says.

“It is such an awesome event; people get so into it,” says Tony Almeida of the annual chili cook-off at Robert Wood Johnson University Hospital, New Brunswick, NJ. Almeida, director of food and nutrition services, says ten departments from the hospital competed last time, cooking up 5-lb. batches of different types of chili with co-workers sampling, enjoying and cheering.

Chefs from RWJ and also from neighboring hospitals St. Peter's  University Hospital and Somerset Medical Center did the judging, and the winner was critical care nurse Diane Candy, RN, with “Candy’s Cowboy Chili,” a complex blend that included ground coffee and bacon. Other winners included “Trauma Alert Chili” from the Trauma and Injury Prevention department and “Suzanne’s Nuclear Chili” from the Nuclear Medicine department.

Almeida says the cook-off is a great way to build camaraderie among the different departments with friendly competition, and overall, “just a huge success.”

Another healthcare chili competition takes place at Fletcher Allen Healthcare during Foodservice Worker Week, and featured ten different takes on chili cooked by employees.
“It’s a lot of fun for the staff,” says Richard Jarmusz, executive chef, nutrition services, adding that chili cook-offs can be fairly simple events to put together. “We just provide space to reheat the chili.”

Employees who are home cooks and proud of their chili recipes is a factor in why chili cook-offs tend to be so successful, says Tony Smoody, executive chef at the Cleveland Botanical Garden, where chili cook-offs among staff bring out some tasty variations.

“There is a lot of interest in events like this from the home cooks,” Smoody says. “By giving the contestants the creative ability to do their own versions, it works really well.”