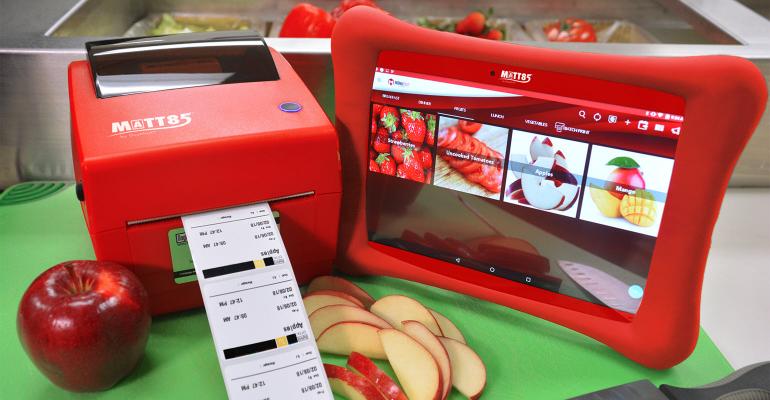 Both front- and back-of-the-house technologies can add operational efficiencies.

It will probably be a long time before robots replace the human workforce in the foodservice industry, but other forms of automation are fast gaining a foothold.

These technologies range from front-of-the-house ordering kiosks to kitchen devices such as automated labeling equipment and temperature sensors. In many cases, they are creating efficiencies by reducing labor hours spent on certain tasks, but automation can also help increase revenues by shifting human labor toward activities that generate sales, for example.

The foodservice industry in general has lagged behind other industries in terms of technology-driven improvements in productivity, says industry consultant Aaron Allen of Aaron Allen & Associates.

Foodservice operations are essentially much like manufacturing plants, where raw ingredients are transformed into finished products, he says. But while industrial manufacturing has seen tremendous advances in automation, the foodservice industry has not.

“Operators can look across all of the functional areas of the business for ways to improve productivity and efficiency through automation,” Allen says.

A typical quick-service restaurant could reallocate 1.2 workers from counter service with the adoption of remote order taking and the transition of other tasks to robots, according to a National Robotics Education Foundation study. That labor shift translates into annual savings in excess of $12 billion in wages, according to a report from Oracle called “Restaurant 2025.”

Back-of-the-house ROI
Operators foresee automation technology generating efficiencies primarily from back-of-the-house, non-customer-facing functions, however. For example, the Oracle report found that 47 percent of restaurant operators surveyed said they expected robots that perform cleaning tasks would be mainstream by 2025. Other top uses for robotics cited by operators in the report include kitchen prep, quality checking in the kitchen and staff training.

Automated labeling benefits
Automated labeling solutions can create efficiencies in the kitchen in multiple ways. First, they reduce the labor costs spent on date-coding labels, and second, they reduce the time spent training workers to perform the task, says Jill Carte, director of product development for DayMark Safety Systems, which supplies automated labeling solutions. Assuming an average wage of $11 per hour for a back-of-the-house employee and about 8.5 hours per week spent manually date-coding labels, that translates to $4,862 per year, or $405 per month, she explains.

With the average cost of $400 for DayMark’s Matt85 kitchen labeling automation bundle (which includes access to the MenuPilot platform), the ROI is achieved in as little as one month, Carte says.

In addition, given the available centralized location of recipe cards and videos, a manager’s time spent training could be reduced by 75 percent, she adds. With an average manager earning $26 per hour, that also adds up quickly.

Operators also derive cost savings from DayMark’s MenuPilot platform because there are no subscription fees, she explains. In addition, automated labeling reduces the potentially costly errors that employees can make when date-coding product.

Other opportunities for efficiencies
A handful of operators have begun experimenting with robotic technologies on the cooking line, such as Flippy, the burger-flipping robot being tested at a CaliBurger location in California.

And at Spyce, a robotic fast-casual restaurant in Boston launched by four Massachusetts Institute of Technology engineering students, seven fully automated woks churn out rice bowls, stir-fry dishes, curries and other dishes at the rate of 150 meals per hour.

Other areas where automation is making inroads in foodservice include a variety of sensor technologies. These technologies can assist in energy management by monitoring conditions in heating, ventilation and air conditioning (HVAC) systems, for example, or by monitoring refrigerator temperatures — and then issuing alerts and scheduling repairs without human intervention.

“Eventually sensors will be on everything and will address everything from maintenance issues to performance issues,” says Allen of Aaron Allen & Associates.

According to a 2017 report from McKinsey, almost half of the activities that workers around the world currently perform could be replaced by automated technologies that have already been demonstrated, based on an analysis of more than 2,000 activities across 800 different occupations.

More potential for automation
The opportunity for automation in hotels and foodservice is among the highest of all occupations, the report finds, with 73 percent of activities capable of being done by machines.

Employees across a range of occupations “will need to engage more comprehensively with machines as part of their everyday activities,” the McKinsey report concludes. “Tighter integration with technology will free up time for human workers, including managers, to focus more fully on activities to which they bring skills that machines have yet to master.”

As classes evolve from in-person to remote, campus dining powers on
Aug 31, 2020