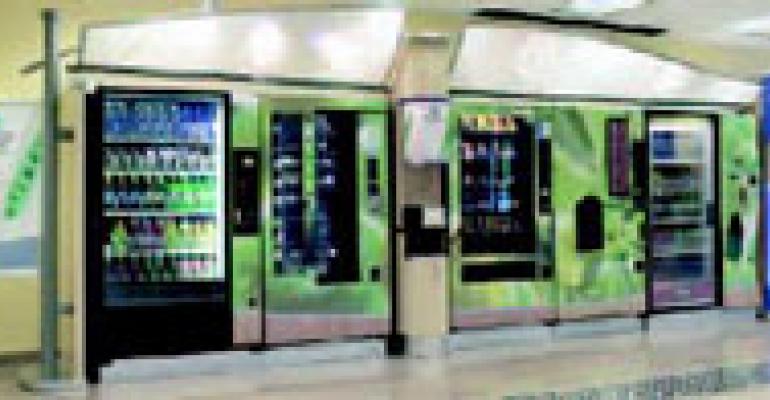 Canteen Vending Gets a New Look

Are you ready for green tea, dried peas and vitamin-packs in the vending machines where you used to find sodas, chips and snack cakes? That change could happen soon in major cities and over the next few years in the rest of the country as Canteen Vending Services converts some 7,500 of its units to offer nutrition-and health-conscious foods and beverages.. The program was rolled out in early July with a big promotional splash, including an appearance on NBC's popular Today morning show on July 12.

Canteen's move follows a rolling wave of law and policy changes in school districts across the country that are restricting the kinds of products that may be sold from vending machines on school premises. But its not only the K-12 segment that has reacted to a nationwide spasm of concern about health, obesity and the role “junk” foods and drinks play in the obesity problem. Hospitals, universities and business-dining operations are also increasingly demanding more healthful convenience food and drink options. Canteen's move is a response to that trend, says Kiser.

“I've never taken out my best sellers, but we want to offer choice,” he explains.

Items in the new product mix are designed to contain 600 or fewer calories for fresh foods and 260 or fewer for snacks, contain seven grams or less of fat and 250 mg or less of sodium.

Offerings will include alternate snack items like nutrition bars, fruit cups and nuts; entrÈe choices like salads and low-fat wraps; and beverages like teas and bottled waters.