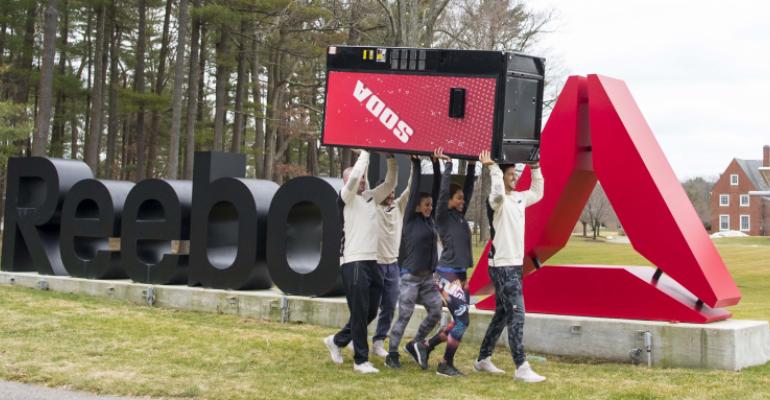 After a revamp, Reebok’s cafeteria aligns with its wellness brand

By eliminating soda, white bread and large candy bars, employees at the sporting goods brand can now practice what they preach.

With its outdoor track, CrossFit box and three-story gym, Reebok’s Canton, Mass., campus clearly exemplifies the shoe company’s health and fitness brand. But for years, the company’s cafeteria did not. That all changed earlier this year when Reebok’s dining partner Sodexo made changes like eliminated soda, white bread and large candy bars.

Although Sodexo made these changes in about six weeks, the shift toward healthier options was a long time coming.

“This is something we’ve spoken to Reebok about over time,” says John Driscoll, district manager of Sodexo Services in North America. "They’re a fitness company, and health and wellness being first and foremost in what they do.”

The updated cafeteria fit in with the changes Reebok is making as a brand, says Yan Martin, vice president of brand management and creative direction at Reebok. “For the last few years, we’ve repositioned our brand back to our roots, which is at its origin a fitness brand,” he says.

That repositioning started with giving employees the option to work out before, during and after work and offering a variety of classes, like yoga, boxing and dance, and activities like trail runs. “As people were embracing this new approach and seeing the benefits of it, there’s a natural progression towards making everything in your life a little bit more healthy,” Martin says. “The next step for us was to the right fuel to put in their body to support their fitness lifestyle.”

Long before some of Reebok’s CrossFit box members hoisted the soda machines off of campus, Sodexo was introducing Reebok employees to the Mindful Platform, a companywide approach to wellness. Kate Giere, a registered dietitian and the regional wellness director of Sodexo Corporate Services, could be found at a table near the cafeteria explaining the platform’s three pillars: mindful eating, mindful living and mindful community.

Throughout the cafeteria, Reebok employees could find Mindful meals by looking for the platform’s icon. These meals have 550 calories or less, less than 700 milligrams of sodium and are trans fat free, in addition to other healthy criteria. A few of the more popular Mindful meals include sage lemon grilled chicken and Jamaican grilled pork loin.

For the Reebok cafeteria overhaul, “we took the nutritional requirements and applied it to the entire café,” Giere says. While they always had items like fruits, salads, whole-wheat bread and low-fat mayonnaise, “now we’re very strict; if it doesn’t fit in those requirements, we’re not going to serve it.”

“This definitely took quite a bit of collaboration with our vendors,” Giere adds. The Sodexo team looked for items like nuts, dried fruits, low-sugar sports drinks and high-protein snack bars. “A lot of [Reebok employees] are working out while they’re at work, and a lot of them are coming to the café for a post-workout snack,” Giere says. The dining team also looked for alternatives to unhealthy snacks. It found baked varieties of potato chips and small versions of candy bars that would still satisfy that craving.

Some of these new items and ingredients were more expensive, Driscoll says. “But I think people have shown that they’re willing to pay a little bit more for something that’s good for them.” Participation at Reebok’s two dining locations, a main cafeteria and coffee shop, has increased 2.2 percent since the healthy renovation. Sodexo serves about 600 people a day at Reebok.

Although most Reebok employees have embraced the changes Sodexo has made, “with anything there’s always going to be a small group that may not be happy with change, especially around the elimination of soda,” Driscoll says. “But this is also a chance to educate and help people better understand what they’re consuming and what they’re putting into their bodies. I think as more people are learning about why some of these changes were implemented, I think we’ve seen a decrease in those negative comments and people are embracing it more today.”

Educating employees and offering samples helped smooth the way for the changes the Sodexo team made. Giere set up demonstrations to show how much sugar is in snacks and sodas and offered employees tastes of the new items like the cafeteria's new pizza, which is made with whole-wheat flour and contains four grams of fiber per slice.

“We made it fun,” Giere says. “Without educating them as far as what the new items were and what it meant for them, I don’t think it would have gone over as well.”