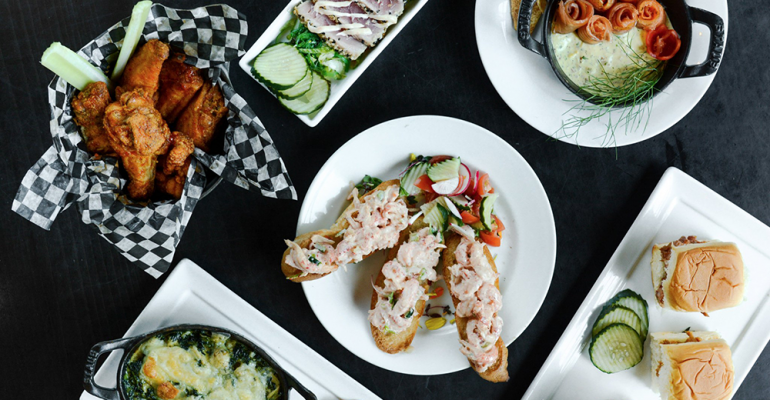 Eubanks is uniquely suited for the job; he’s a veteran, having served as a Naval Culinary Specialist and then worked in culinary enterprises like Wolfgang Puck Worldwide and Fox Restaurant Concepts.

And Eubanks grew up just across from New Orleans, in one of the surrounding bayou parishes, where he learned living-off-the-land cooking from relatives who occasionally wrestled alligators. His culinary journey has run parallel with the evolution and “freewheeling creativity” of New Orleans’ own modern cuisine, taking those bayou, Cajun and Creole cues into the limitless reality of today’s modern kitchen.

“My grandpa was a farmer and my father was a cook on an oil rig,” Eubanks says. “Culinary stuff was a way of life and sustainability way before it was a huge thing. We raised vegetables and hogs. We made our own ham and bacon. I’m a big believer in using everything around you.”

And once in a while, if a neighbor called with a pesky alligator in their backyard, Eubanks and his family would trap the ‘gator and relocate it to a more suitable location.

So, by contrast, changing a whole menu in a short period of time shouldn’t be so daunting, right? Right. Eubanks has “made pretty much the whole menu mine,” in under a year’s time.

He redid all the recipes, retooling them to reflect the glory of New Orleans food done on a large scale, around 300 covers on a busy day and anywhere between 500 and 900 covers on “a really busy day,” Eubanks says. “So, we do things that are easily executed…presentation is everything.”

That includes soups, salads, starters, desserts, drinks and of course a variety of po’boys: with fried oysters, shrimp (or both!) or slow-cooked beef debris for a “Nola French dip” version. Eubanks has created a bananas Foster/doberge cake hybrid based partly on his grandmother’s recipe. The World War II theme of the museum comes through in menu names, such as the Victory Garden Bloody Mary and the Buffalo Soldier cocktail, but also through special events where history comes to the table.

“We do curated dinners every month, based on history points and lore,” Eubanks says. “A lot of foods during war times were blended…guys were stationed in Germany, British soldiers were in Palestine…It was an interesting relocation for small-town American guys who had never tried different foods. You ate a lot of different things if you were a soldier. And at home there were rations, but then it led to multicultural food when soldiers returned.” 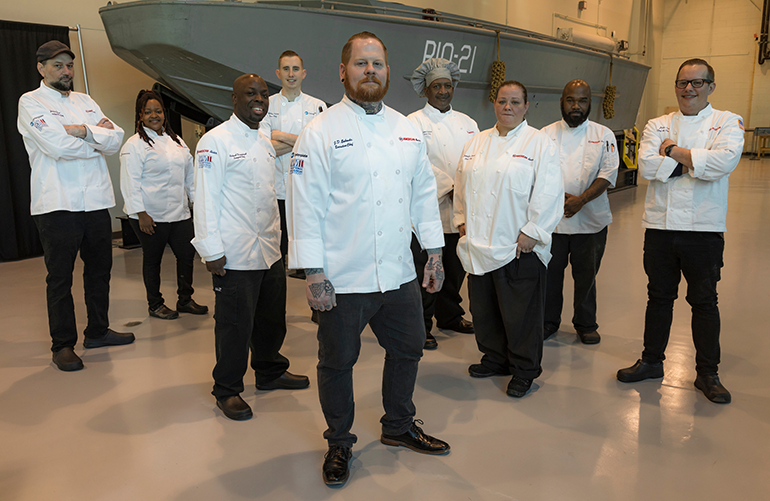 Eubanks also draws from the rich cultures that make up New Orleans, including a lot of Mexican cooking. For brunch every weekend, huevos rancheros is a popular item.

“People don’t realize the Mexican influence on a lot of our communities,” he says. “Smothering, cooking down vegetables…a lot of that comes from Mexican cooking. That’s why I felt like the museum menu should be a mixture of Louisiana classic and Mexican influence. People really grasp onto those dishes.”

He’s even made the classic Tex-Mex dish, Frito pie, into a shareable plate.

“Who wouldn’t want to eat nachos smothered with pork and jalapenos?” he says, adding that he hopes more locals in addition to museum visitors will stop in to the restaurant either through everyday dining or catered events.

“My biggest focus is to bring the banquet department to the next level; I have a really passionate view of where I want to be. We have a really strong culinary team,” Eubanks says. “I’ve made the food my own and I want to draw in more locals.”