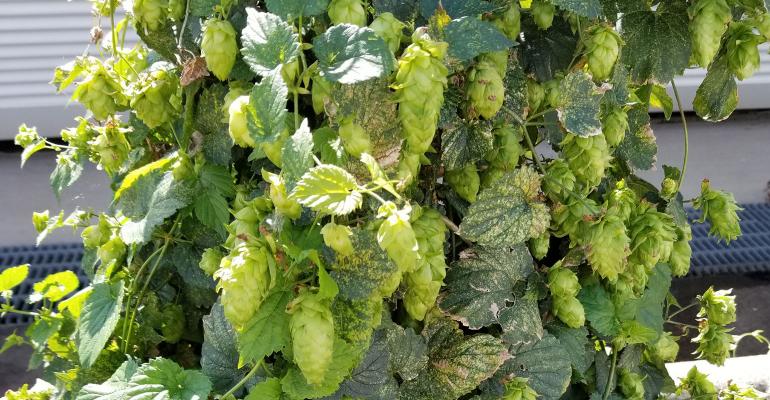 Photos: Levy Convention Centers
A set of 10 hops plants on the roof of the Pittsburgh Convention Center produced 10 pounds of hops for the making of an IPA sold exclusively at the venue.
News & Trends>Business & Industry

Craft beer is all the rage these days, especially locally brewed craft beers. In Pittsburgh, the David L. Lawrence Convention Center (DLLCC) and its concessionaire Levy Convention Centers not only have embraced that trend but also gone one step further. They supply hops grown on the center’s rooftop to beermaker North Country Brewing of nearby Slippery Rock, Pa., which then uses them to make a signature beer, Roof Top Hops, served exclusively at the DLLCC by Levy.

The beer, an American IPA, was rolled out the first weekend of March at the start of the 2018 Pittsburgh Home & Garden Show and was expected to run through the initial 15 full barrel batch during the show’s 10-day run, says George Meehan, Levy’s general manager at the DLLCC. “Everyone loves it!” he reported after the first weekend of the show. “We have heard everything from ‘well balanced’ [and] ‘not too hoppy’ [to] ‘I typically don’t like IPA’s, but this is great!’”

The beer, described as having “a nice malt backbone and good hop bitterness and aroma from the Chinook and Cascade hops that were used throughout the boil and in dry hopping,” has an ABV (alcohol by volume) of 6.2 percent. It is served in a 16-ounce pour throughout the DLLCC in both permanent stands and on a draft cart.

Promotion of the beer has been done through a combination of traditional (internal signage) and social (Instagram). The DLLCC’s marketing crew also did a mailer and ran local radio and TV spots.

The hops used in the beer come from 10 plants—five Chinook and five Cascade—situated in the convention center’s rooftop garden. They were initially planted last May and produced 10 pounds of hops used in making the beer in December.

“Only challenge we had in year one was where to put them as they grew,” Meehan observes. “We created a hop trestle out of PVC pipe in order to keep them off the ground and growing up—at peak times they were averaging 8 to 10 inches a day. By mid-summer the trestle was eight feet high and being challenged by the wind, [which is] on the roof right next to the Allegheny River. We plan to do something bigger and stronger this year.”

The idea behind beer made with the homegrown hops combines awareness of cultural trends with a desire to send a message about sustainability, plus some plain old serendipity in the availability of a willing brewing partner.

“Crafted beers, particularly IPA’s, are in right now and we’ve had great success with our rooftop garden,” Meehan explains, “so we thought it was worth a shot. We came up with the idea for Roof Top Hops with our building partner SMG and luckily for us, North Country Brewing was willing to take a chance with our hops.”

In fact, it was more than willing as North Country Owner Bob McCafferty “is all about sustainable, charitable and local, which aligns perfectly with our vision,” Meehan says. That vision is reinforced by the fact of DLLCC being one of the country’s largest Platinum LEED certified convention centers, so “sustainability is always a focus here at the DLLCC. We will take any opportunity to add something different or unique to the roof top garden.”

“Tom Bugel, our director of restaurant services, is the driving green thumb behind our unique rooftop garden and decides what’s getting planted from year to year, as well as the culinary team managing it on a daily basis,” Meehan explains.

While Pittsburgh’s climate places the peak of the gardening season in the summer, which is a slower time of the year for the convention center business, Levy’s culinary team still find ways to utilize the produce.

One is a wrap sandwich called the rooftop wrap that is filled entirely with product from the rooftop garden and has been the featured item during both concession events and at in-house lunches.

The culinary team also features garden items in random acts of kindness lunches and gift baskets for the client and customers over the summer, and some is also donated to a local food bank.

As for the Roof Top Hops brew, will it remain a DLLCC exclusive?

“Absolutely,” Meehan says. “We are having a blast watching people enjoy it! We are already on the brewing schedule this month to get another batch made with the remaining hops.”