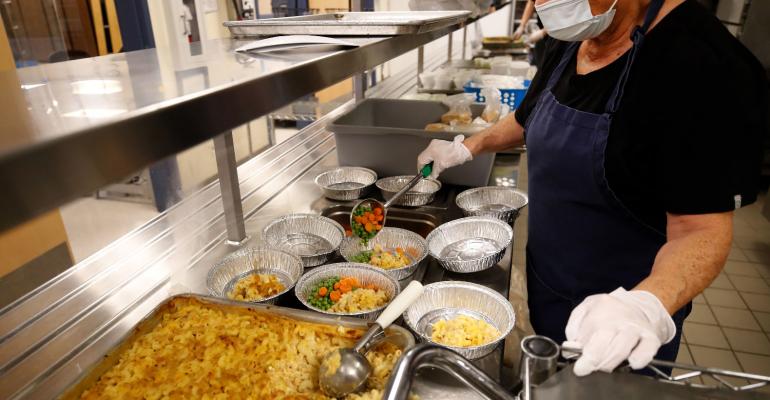 With most employees working from home, simplicity is the name of the game. But how will things change when workers eventually come back?

SAS Director of Foodservices Patti Dickson was responsible for feeding some 5,500 corporate employees in normal times. But during the pandemic, that number has shrunk to less than 200.

These days the vast majority of the Cary, N.C., software company’s employees are working—and eating—from home. “Like most people in the country, that Friday in mid-March, we got word that we should eliminate all of our self-service areas, like our salad bar. Monday, we operated that way. By the end of Monday, we knew campus was going to shut down,” Dickson recalls. She and her staff took a few days to hatch a plan for feeding the handful of essential employees who would still be coming in to work on a modified schedule.

By the following week, they were back to serving—albeit in a totally different way. Instead of breakfast and lunch offerings at six cafes and four grab-and-go location, Dickson is just doing lunch. And it’s only three days a week.

SAS committed to keeping all of its foodservice employees on payroll. But with far fewer mouths to feed and distance to maintain, only a handful of Dickson’s staffers are coming to work on any given day. Small teams are scheduled on a rotating basis and everyone sticks with their group. “That way if someone gets sick, we haven’t potentially exposed 40 people, it’s just four. You stay with your intact team,” Dickson says. And within each team, members stay far apart. “Prep and assembly would normally take place on a work table with people next to each other. But we’ve spread that distance out and people are doing their work more individually,” she explains. 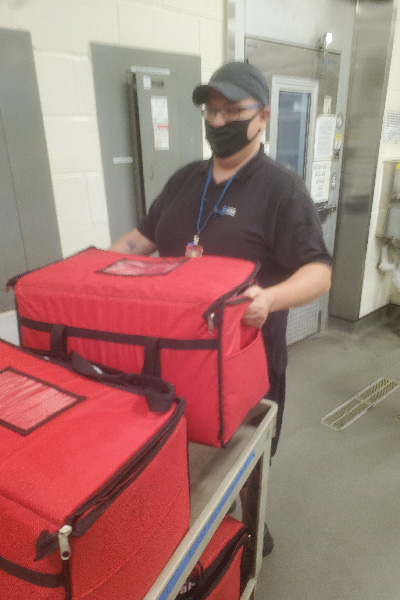 Photo: Meals are packed up and delivered to a central pickup site.

Employees place their lunch orders via a group contact platform by 10 a.m. “We offer two basic selections. Lunch A might be a boxed lunch with a sandwich and chips, lunch B is hot,” says Dickson. The on-duty team preps the meals, bags them up, labels them and delivers them to a central location for pickup. “We’re keeping it pretty darn simple right now,” she says. All meals are currently complimentary to employees.

Dickson’s system may be simple, but keeping it running isn’t always easy. Unexpected supply issues often crop up, leaving the team scrambling to make menu adjustments. “A product you might’ve gotten for four weeks straight suddenly isn’t available when we need it tomorrow,” she says. Communicating with her staffers has been harder too. As a tech-oriented company, SAS relies heavily on emails and instant messages to distribute information. “Our frontline foodservice staff don’t all have that kind of skill, and they’re accustomed to us talking to them in person,” Dickson explains. To stay in touch, she and her senior managers come to campus whenever lunch production is happening. “We show up, show our faces and answer questions. That goes a long way,” Dickson says. 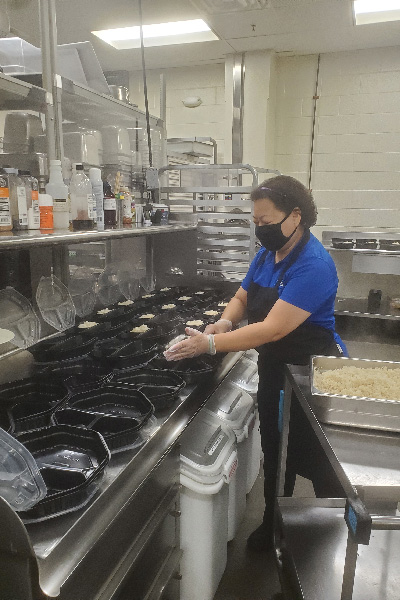 In the spring, Dickson assumed that her strange new way of serving would be short-lived. Six months in, she knows the current setup is sticking around for a while. “I think things will continue on the rest of the third and fourth quarter,” she says. But the system can’t last forever. “I worry going into next year how things will change. I don’t know how long a company like ours can sustain what they’re doing. At some point we probably want to get out of the free lunch business,” she says.

Dickson also wonders what her operations will look like when more people do eventually come back to work. Though SAS is beginning to talk about reopening plans, they’re likely to follow the lead of tech companies like Google, Dickson notes. Should campus reopen in 2021, the company will probably commit to a very flexible policy at least through the end of the current school year.

“How many customers we’ll have when we come back is a big variable,” says Dickson. “A lot of people have said, I don’t really like this working from home thing, but maybe I’d want to work from one or two days a week.” And when employees do return, some of the food options they used to love might now make them uncomfortable. “I don’t see our salad bars coming back the way they were, maybe ever,” Dickson predicts.