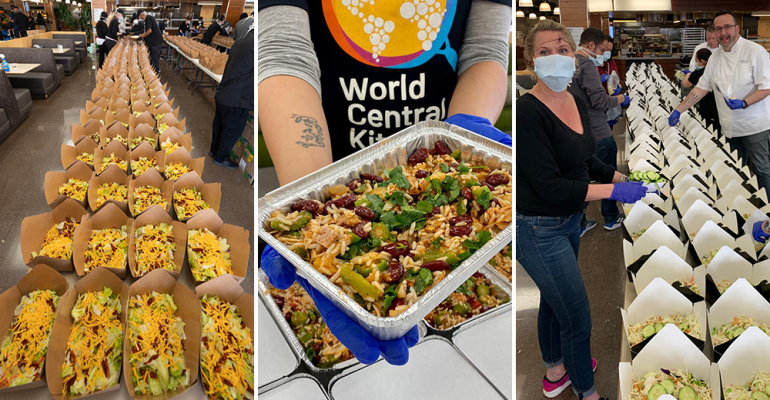 When a coronavirus outbreak kept the Grand Princess cruise ship under quarantine near San Francisco in early March, a big concern was how to feed the 3,500 stranded passengers and crew members. World Central Kitchen (WCK), an NGO created by chef José Andrés, came to the rescue, with major support from Bon Appetit Management Company.

Andrés reached out to Bon Appetit CEO Fedele Bauccio, who in turn recruited more than 30 Bon Appétit chefs, managers and other staff from the company’s accounts in San Francisco and across Northern California. The WCK staff and volunteers and the Bon Appétit crew took over the Marketplace Café kitchen at University of San Francisco, which was closed for spring break, and turned it into a massive assembly line.

For a few days they prepared and packaged meals for 3,500, which the WCK team delivered to the ship. As passengers gradually were cleared to disembark, the pipeline of meals continued; all told, the team produced about 50,000 meals during the week or so that the ship was in limbo.

One On One: Sodexo chef talks about experiencing Capitol riot
Mar 26, 2021