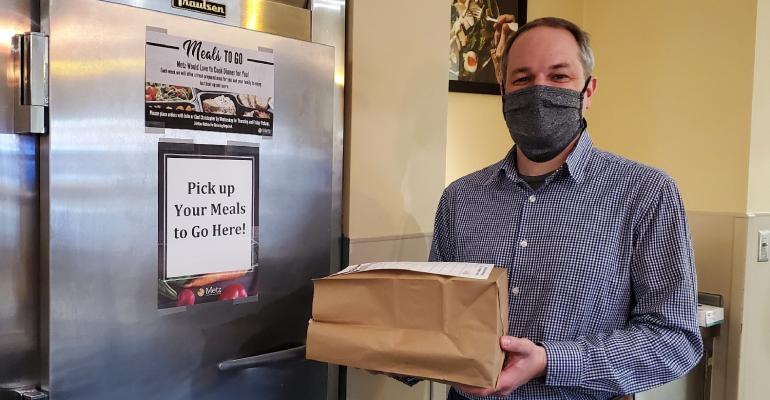 With employee counts minimized by coronavirus-imposed restrictions, business dining programs have had to scramble to generate sufficient business to remain viable. One avenue is the provision of take-home meals to augment the meal service offered to staff onsite, and it is a strategy that has been deployed with some success by the Metz Culinary Management team at the administrative offices of Penn State Health in Hershey, Pa.

The building itself is the former headquarters of the Hershey Co. that has been taken over by Penn State Health. As with most such white-collar venues, remote work has been the norm since the spring, and about 90% of the building workforce is currently working from offsite on any given day, says Chris Zarker, general manager for Metz in the complex.

Related: The future of food service breakfast is flexible: On the go, anytime, anywhere

“Most of those who are here are the leadership team, and they are the main people we serve at the moment,” he observes.

Of course, such a severe customer count reduction has meant changes. Zarker says that of the six prepared food serving stations in the cafeteria, only the deli and grill remain open along with the Up for Grabs grab-and-go station. Hours are 7:30 a.m. to 1:30 p.m. during the week. 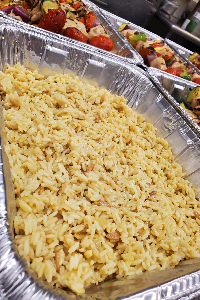 Photo: Rice pilaf serves as the starch side to go with the popular chicken kabob entrée in the Metz Meals To Go! take-home program at Penn State Health.

The venue’s Meals to Go! initiative launched shortly after the COVID crisis hit this spring.

“We were trying to find new and creative ways to get more revenue in and we saw that some other [operations] had success with take-home meals and [onsite] grocery shopping,” Zarker explains. “Here, they weren’t really interested in [those options], so we started to think about a meals to go that wasn’t just a quick get something from the grill and go but a full dinner that they wouldn’t have to prepare.”

The meals are already cooked and come with instructions on how to reheat properly. Only one option is available each week as preparing more would not be economically feasible given the low traffic. Weekly sales range between 10 and 20 meals at an individual cost of between $20 and $35 depending on the meal and the number of servings desired—the options are two, four or six.

Zarker has already prepared more than a dozen different menus since the program launched and now has a cycle that emphasizes the most popular selections, such as chicken Parmesan, grilled chicken kabobs and chicken enchiladas. Other entrées have included stuffed shells, beef Bourguignon, flat-iron steak and pulled pork. Sides always include one starch and one vegetable, with the selections depending on the entrée.

“If I have a local item, I try to get that in,” Zarker observes. “For example, we recently got fresh corn for corn on the cob.” 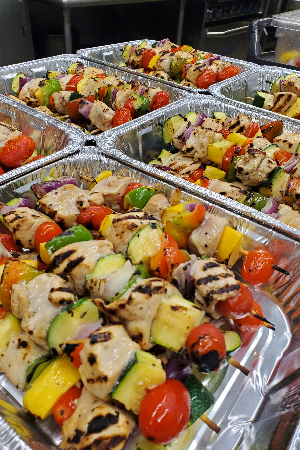 Photo: Chicken kabob skewers have been one of the most popular entrées in the Metz Meals To Go! take-home program at Penn State Health.

The program launched in April, a few weeks after the realization that the COVID shutdown would last more than just a couple weeks, he says. Promotion is primarily through a sign in the cafeteria announcing the week’s menu, accompanied by order sheets.

Because not everyone is in the building every day, pickup is available both Thursdays and Fridays. Orders, which currently are only through the physical paper forms submitted in the cafeteria, have to be received by Wednesday afternoon and payment takes place at the cafeteria checkout when the order is picked up. Options include cash, credit card or the company’s internal declining balance payment system.