The café has its own smoker creating three different items: smoked chicken with white barbecue sauce, buffalo brisket and pulled pork, which is featured in this sandwich. The café’s core items, i.e., the top sellers, will remain, but seasonal changes will keep things interesting as time goes on. Next up will be a take-and-bake Thanksgiving dinner with a whole turkey and favorite sides that guests can purchase and take home.

This is an example of a dish that’s an opportunity to tell a story about black history that may be a surprise to some. In the cowboy days of the American West, this stew was chuck-wagon fare cooked over a campfire, using lesser cuts of meat and offal. But, “since we knew we couldn’t sell an offal stew,” Lukas says, “we substituted braised short ribs.”

This dish is found at one of the café’s four regional stations, the Western Range. The other stations are the Creole Coast, the Agricultural South and the North States, each with dishes that seek to convey stories of diaspora, migration and African American communities across the U.S.

Chef BJ Dennis was instrumental in teaching Lukas and the culinary team about the Gullah Geechee traditions found in South Carolina.

“The most interesting thing was to find out about the living culture that still exists there,” Lukas says. “There is still such a strong African influence to the food.”

This is another dish with a story. At the Northern States station, the oysters tie into a current exhibit about oystermen. Thomas Downing was an African American New York restaurant owner who harvested his own oysters and ran a stop on the Underground Railroad in the 1830s.

“We want to take the opportunity to educate people, and it’s not necessarily food traditions, but the stories behind the foods,” Lukas says. “We knew this dish would be a softer seller, but we wanted to tell the story.”

The oysters, from Chesapeake Bay, in this New York oyster tavern staple are roasted and then nestled in a creamy sauce with toasted bread.

The National Museum of African American History and Culture’s Sweet Home Café has a menu that’s curated with as much care as the exhibits. Dishes that we immediately recognize as soul food, like fried chicken or hoppin’ john, are being served alongside lesser-known dishes like son-of-a-gun stew and oyster pan roast.

The café is managed by Restaurant Associates and Thompson Hospitality, the largest minority-owned foodservice company in the country. More than two years of culinary development with leaders in African American history and cooking, including Jessica Harris, Leah Chase and BJ Dennis, led up to the first day of operation, Sept. 24. Celebrity chef Carla Hall is serving as culinary ambassador, helping to publicize the new museum’s food program.

Chef Jerome Grant, previously executive chef at the award-winning Mitsitam Native Foods Café at the Smithsonian’s National Museum of the American Indian, is leading the kitchen. On opening day, about 4,000 people were served, including President Obama and former Presidents George W. Bush and Bill Clinton. Here’s a peek at the new menu items.

The gospel bird platter is a nod to the importance of the after-church Sunday dinner to the African American family. This shareable platter includes whole fried chicken, sides of savory collard greens and fluffy biscuits.

“About 25 percent of overall sales is coming from soul food like the buttermilk fried chicken, mac ‘n cheese and hoppin’ john,” says Albert Lukas, supervising chef for Restaurant Associates. “In 15 hours on the first day, we served about 1,900 pounds of fried chicken and 400 pounds of shrimp for shrimp and grits. The feedback from guests has been nothing but positive.” 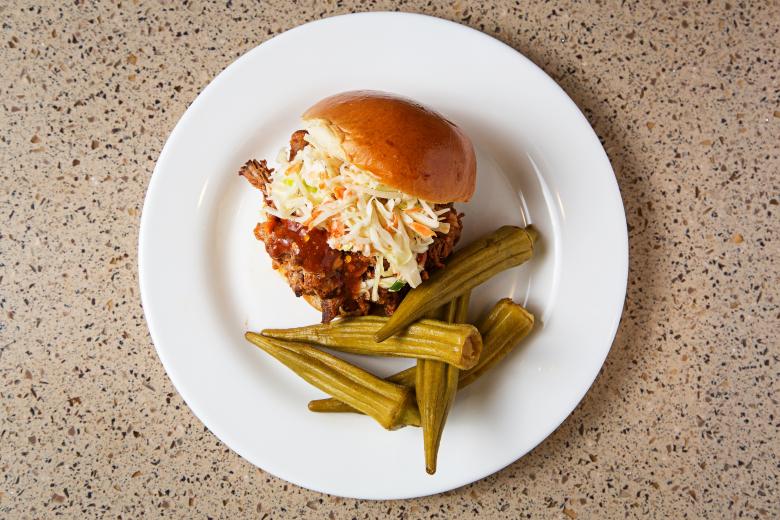 Next Up
Best Concepts: UMass adds another jewel to its glistening dining program
Start Slideshow ›