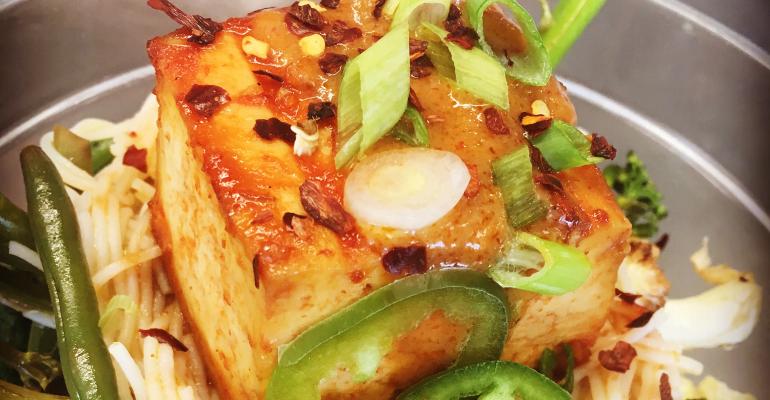 Meat has been available but hard to find on Mondays in the café at the Adobe Systems Inc. facility in Lehi, Utah. That’s because the dining operation there has been observing a Meatless Monday routine since this past spring that encourages diners to abstain from animal proteins for at least that one day each week.

For unrepentant carnivores on those days, burgers can be had and there is turkey and some other deli meats at the sandwich station as well, “but they’re not talked about,” laughs Ted Mathesius, executive chef for management company Bon Appetit, which oversees the dining operation at the facility.

The salad bar is completely meatless on Mondays, as is every special of the day and every soup. “We make a special effort to make sure that all our specials and all our customer-facing food is meatless,” Mathesius observes.

The Lehi facility and Mathesius were actually one step ahead of the organizational curve, as shortly after they started their Meatless Monday program, Adobe asked all its cafes worldwide to go totally (or at least mostly) meatless on April 17 to kick off Earth Week.

Mathesius says his initiative was independent of the subsequent companywide effort.

“I just did it one day because I wanted to, but then I got responses from some people here in Lehi saying that they appreciated it, so I stuck with it,” he says. “Later, I think people jumped on board to support the [broader company initiative].”

The worldwide Adobe meatless Monday received plenty of in-house promotion and was replete with plenty of posted information about its health and environmental benefits, but when Mathesius had started it on his own, “I just put up my food and talked to people about it as they came up [to be served].”

The veg-centric program has not hurt participation, Mathesius claims. He stresses that “the feedback is mostly positive,” though the line at the grill, where burgers are still unobtrusively available on Meatless Mondays, tends to be a bit longer than normal on those days. The Lehi site has about 1,400 employees, many of them in the 25 to 40 age bracket and with professional qualifications (engineers, marketers, etc.), so there is already a general openness toward different foods and ways of eating, Mathesius notes.

The Adobe Lehi café includes a deli, salad bar, a grill, a global/international station, a comfort food/entree station and a healthy dining station called Adobe Well. It operates from 7:30 a.m. to 10 a.m. for breakfast, and then from 11:30 a.m. to 2 p.m. for lunch. After that an island with coffee, grab-and-go items, pastry and snacks stays open until about 4 p.m.

“Everything that I sell in this café is nutritionally broken down [so] a guest can see how many carbs, calories, sodium [and so forth] each dish has,” Mathesius says.

The Adobe Well station specializes in lean proteins, whole grains, fresh fruit and vegetables. On meatless Mondays it is exclusively vegetarian, while on other days meat is a sometime component.

The key differentiator is that the plates served at Adobe Well are built to order off specific recipes in order to ensure they meet set nutritional parameters in areas like calories, fat content and sodium levels. It offers a single choice each day, such as a Greek chicken salad, a curried chicken wrap with wheat berries, a summer turkey salad and veggie mushroom meatloaf.

A registered dietitian/nutritionist evaluates each recipe several weeks before it is scheduled to be on the menu and if they meet the requirements, they are entered in the database where their nutritionals are broken down and available for guests to review.

The Adobe Well meals also qualify employees who purchase them for points toward perks like a free training session in the gym.

Breakfast at the Adobe Lehi cafe sees about a hundred customers on average. Its centerpiece is the breakfast grill, where everything, from standards like omelets and breakfast sandwiches to daily specials such as waffles or eggs Benedict, are cooked to order.