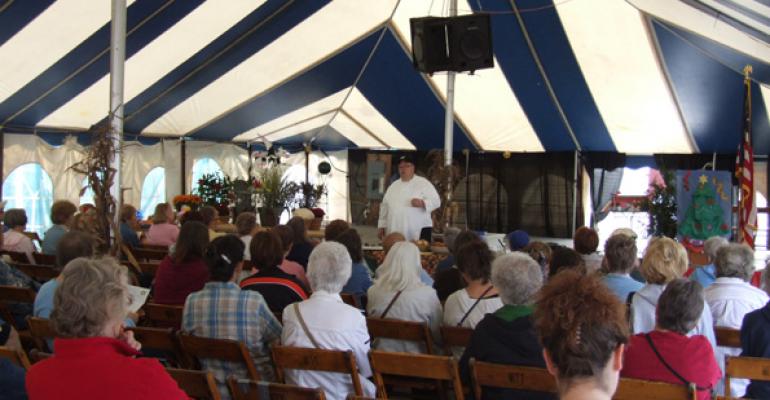 Chef Kevin Burke of Ashland University gets fair-goers excited for the flavors of fall with a demo of Double Cranberry Crostini and other autumn appetizers.
Food & Beverage

Each year at the Ashland County Fair, a chef from Ashland University demonstrates recipes alongside the candy apples, carnival rides and prize livestock. This year, Chef Kevin Burke represented the university with some perfect midwestern fall appetizer ideas.

Burke says he focused on "all the different flavors that come with the season," including pumpkin, cranberry and turkey, showing the audience how to create some amazing hot appetizers and hors d'oevres that would work well at any autumn gathering.

A standout appetizer he created was Double Cranberry Crostini with smoked turkey and cranberry creme served on French bread and topped with cranberry chutney. (see recipe below)

Audience members sampled the crostini, and also a warm pumpkin dip that's both savory and sweet. Recipe cards were available for the audience to take home, and Burke encouraged everyone to add their own personal touches. Here's the recipe:

2. Slice baguette diagonally into 1/2" slices. Place on a large baking sheet or two sheets to fit all in one layer. Bake for 6 to 8 minutes or until the edges just start to brown. Cool slightly, cut smoked turkey into about 30 pieces to fit on bread slices. Spread bread with cranberry mixture. Top each with a piece of turkey. Dollop with the chutney.

2. Cook and stir over medium heat until sugar is dissolved. Cook, uncovered, for 3 to 4 minutes or until cranberries pop, stirring occasionally.

3. Transfer to a medium bowl; let stand 1 hour until completely cool. Store covered in refrigerator for up to 1 week.