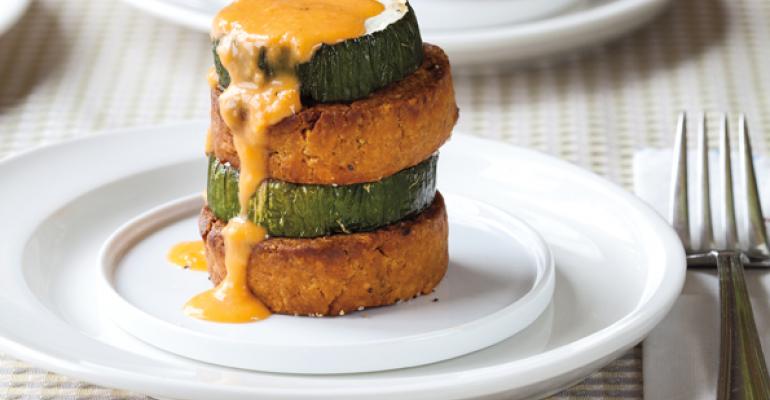 It’s the season when the nights get longer, the air gets crisper and the appetizers get interesting.

A gathering of freshmen and their parents around a roaring bonfire. Spry senior residents preparing to polka at an October fest. A hayride through an open field in the crisp air.

Idyllic visions of fall, for sure. But what’s missing? Answer: A passed tray of baguettes smeared with goat cheese and acorn squash puree. Or perhaps tiny pumpkins, hollowed out and filled with French Onion Soup spiked with whiskey, or candy-striped beets adorned with a mignonette sauce, raw-oyster style?

When chefs let the harvest season serve as their inspiration, amazing appetizers for cozy gatherings are a natural.

“This is my favorite season because we’re rediscovering things like squash and root vegetables,” says Jeffrey Arthur, executive sous chef, The Ohio State University. “You can use your imagination and really surprise people when you use fall ingredients in a more creative way.”

“This is my favorite time of the year,” agrees Ahmed Mohammed, CCC, CFBE, executive sous chef, University of Saskatchewan. He names crisp air, sweaters and his Autumn Shrimp Bruschetta as the highlights of the season.

In the Midwest, fall and football go hand in hand. Every year at this time, leaves turn colors and football fans turn frenzied. One storied rivalry is between The Ohio State University and the University of Michigan.

At a cooking competition held each fall, teams of chefs from both schools meet at The Culinary Vegetable Institute in The Chef’s Garden, a small farm in Milan, OH, that supplies chefs around the country with herbs and vegetables.

In planning several courses of food, the chefs get their choice of the farm’s mind-boggling selection of herbs, micro greens, radishes, beets, butternut squash, pumpkin, purple carrots and more.
“Going to the farm and seeing its approach to agriculture is amazing,” Arthur says.

One of the standout appetizers that the OSU team, led by Executive Chef Roger Garland, created last year was a great example of classic fall ingredients presented in a novel way: pumpkin bowls filled with French Onion Soup.

“We selected about five different onions to caramelize for the soup, and they all had different flavors,” Arthur says. Instead of the traditional sherry to give the onion soup that signature spiky flavor, he opted for a few glugs of Maker’s Mark whiskey.

This pumpkin cauldron, bubbling with Swiss cheese and sprinkled with toasted pumpkin seeds when ready to serve, is also available back at Ohio State on its catering menu. It’s one of the highest priced items, but still sells very well and always leaves an impression.

Toasted pumpkin seeds are a great way to quickly add some autumn allure to salads. Alternately, pumpkin seed brittle or butternut squash seed brittle can be shattered and used to adorn anything from appetizers to desserts.

Another popular appetizer on the menu is a selection of sliders. When fall comes around, Arthur uses grated Brussels sprouts tossed with a lemon vinaigrette for a seasonal slaw to top them off.
During competition, Arthur’s team had prepared a few pumpkin bowls using vegetable stock for vegetarians on the judging panel, but was caught off-guard by the unexpected arrival of two vegans.
No problem: they came up with a vegan appetizer using candy-striped beets sliced thin and topped with a mignonette of shallots, garlic and olive oil.

Ohio State won the competition. Both teams are scheduled to meet again this fall. The rivalry continues!

Fall events can get senior residents looking forward to another season. At Sherwood Oaks, a CCRC in Cranberry Township, PA, themed meals are a part of each month, but the fall months are favorites, says Danielle Weber, MS, RD, GM of dining services, Cura Hospitality.

“They love the Apple Harvest dinner, where we offer flatbreads with apple butter, blue cheese and sage as a small plate,” Weber says.

Another example of a fall gathering made that much more fun with the addition of harvest flavors.