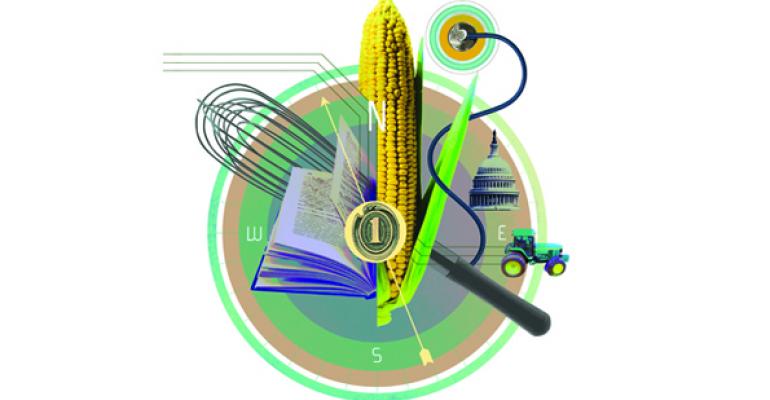 Want to know what business will be like in 2013? Look over your shoulder.

Most economists expect the U.S. economy in the year ahead to perform slightly better than the one just past. Business prospects continue to improve slowly, with consumer confidence at its highest level since the recession began. Unemployment remains high and is the main barrier to more robust growth, but is on a definite downward trend.

Manufacturing output is up and the sales of cars and homes will increase in 2013. While healthcare costs continue to rise, they’ve remained stable as a percentage of GDP for the third year in a row; inflation has remained low (although not in terms of food costs, which are a major concern going into 2013).

Concern remains over Congressional inability to come to grips with fiscal issues. It is still uncertain whether across-the-board sequestration cuts can be avoided, underscoring how political gridlock in Washington is a primary cause of uncertainty in the market. But with election year theatrics over, there is optimism that budget progress will be made in coming months.

Of significance: the festering debate over how to bring under control the costs of the $500 billion Farm Bill and its various food stamp, food crop, insurance and program subsidies. Current legislation expires in September and no one is predicting a timetable for when and how Congress may come to grips with it. Everyone has an ox to gore.

Payroll tax rates returned to their norm in January. While no one likes to see consumer disposable income decline, ending the payroll tax holiday was a necessary step towards addressing national budget deficits and emerging from the long recession. The move will dampen consumer spending in the first quarter. After that, spending should pick back up. The country will likely enjoy growth in the 3 percent annual range by the end of the year.

On the foodservice front, Technomic predicts onsite segments will see healthy growth this year. That will be led by hospitals (5.5 %), colleges (5.1 %), senior living (5.6 %), B&I (4.0 %)  and K-12 (2.0 %) (see table). In 2012, Technomic reports that onsite operators in hospitals, senior living and colleges outperformed  those in commercial and full service restaurants and are on track to do so again in the year ahead. Foodservice in business and industry has recovered from the recessions doldrums and performed and should also grow significantly in 2013. 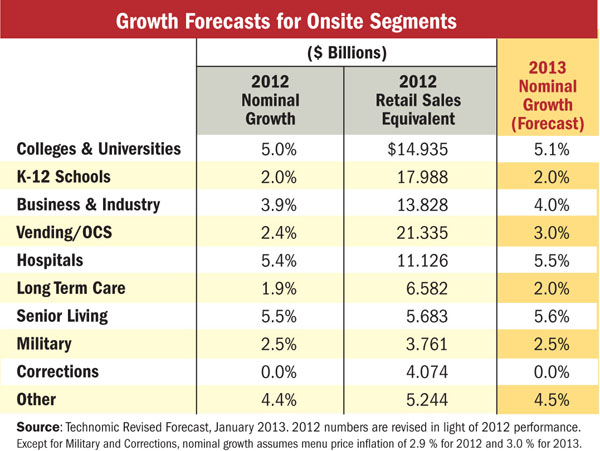 Food cost inflation has become a major challenge across the foodservice industry, with more food cost increases expected over the course of the year as the effect of last year’s historic drought ripples through the food chain. Grain commodity prices hit record highs last August and corn stocks will be at a 17 year low this summer.

Food prices at the crude and intermediate stages of the Producer Price Index (PPI), experienced significant increases in 2012 (crude food prices were up almost 12 percent between June and September according to a January report from the Bureau of Labor Statistics). They’re expected remain volatile in 2013.

At the consumer level, USDA’s consumer price index forecast suggests the price of most commodities will increase 3.0 and 4.0 percent next year, with increases for fresh vegetables running higher at 4.0 to 5.0 percent.

For a more specific look at the key trends affecting individual onsite segments, go to the foodservice market reports at the following links: