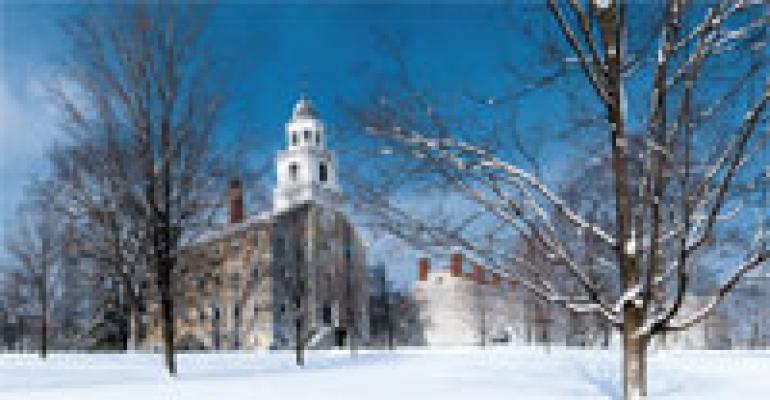 How Middlebury is Managing Green Expectations

Middlebury College Dining Services remains committed to the school's values in an era of fiscal challenges.

The traditional role of dining services in onsite environments has been to be reliable, unobtrusive and supportive of the larger institution's mission. Nowhere has that been truer than at Middlebury College, a private liberal arts institution of higher learning located about an hour south of Burlington between Lake Champlain and the Green Mountains in Vermont's bucolic backcountry.

Consider the meal plan…or better yet, the lack of it in any meaningful sense. At Middlebury, being a resident student — which in effect describes almost everyone in the 2,400 undergraduate enrollment — means you automatically have free run of the dining halls just about all day long. If you're hungry, or just want to grab a quick beverage or snack, you go in and get it. There are no checkout lines.

“The idea is that students are here to learn, and food shouldn't be something they have to worry about,” says Matthew Biette, director of dining services for the past six years. “Universal access also eliminates any economic differences among students, so you don't have a situation where one student eats whatever he wants while another is limited by a tight budget.”

That egalitarianism is part of Middlebury's culture, which also very prominently emphasizes sustainability. The school has been at the forefront of the campus “green” movement, incorporating environmental stewardship into its mission statement and making an aggressively ambitious commitment to be carbon neutral by 2016.

As a result, Middlebury has consistently ranked among the leaders on the College Sustainability Report Card issued by the Sustainable Endowment Institute, a major barometer of “green-ness” in American academia. A major contributor to that track record has been the dining service, which received an “A” grade in the most recent report for both its local purchasing and its waste management efforts.

But commitments to sustainability and mission support are easy to make in flush times. It is hard times — when endowments shrink, budgets are put under pressure and students curtail their discretionary spending — that really test the depth of a school's and a department's commitment.

And that is a test that Middlebury Dining Services, along with the college, is determined to pass. The department, like all others at the college, has had to re-examine its budget in light of the new fiscal realities. That process has yielded a 25 percent reduction in labor (through attrition, not layoffs, Biette is quick to point out) and some trims in services. Catering has been cut back, one dining hall taken mostly off line and hours at the other two somewhat curtailed. Biette has also instituted small cost saving measures around the edges, such as eliminating juice from the evening meal, when it was sparsely consumed anyway.

But despite the economic pressures, the commitments to support the educational mission and the college's “green” focus remain solid for now. In fact, in some cases, changes made to support the sustainability mission have also had the practical effect of producing cost savings. Case in point: trayless dining, introduced in 2007 primarily as a moral imperative to reduce the carbon footprint, has ended up saving money on food purchases.

If you are a student at Middlebury, getting a good meal may literally be the least of your worries. With campus commons dining available every day from seven in the morning to eight at night (except for a two-hour gap in the middle of the afternoon), you can walk in anytime you want, as often as you want, and take whatever you want from what is being served at the time.

It sounds comprehensive, but the all-day service one sees today on the Middlebury campus is actually a truncated version of what was offered as recently as a year ago. Instead of three dining halls open all day, only two — Ross and Proctor — now offer that service. A third, Atwater, is open only for a limited breakfast service during the week.

In fact, full hot breakfast service is now available only at Ross Dining Hall, which also opens for dinner an hour later (5 pm) than Proctor because the light early dinner traffic didn't justify two dining venues opening at 4 pm (both, however, close at 8 pm).

The recent changes followed an extensive initiative dating back to the 1990s to convert the campus to a commons system. That initiative produced Ross Dining Hall in 2002, the first on campus with a modern exhibition station style of service. Ross was followed by Atwater, which opened to great fanfare back in the spring of 2005.

Featuring modern display cooking centered around a stone hearth oven and massive windows opening to spectacular views of the Green Mountains, it was designed to meet the latest standards in sustainable construction (for example, the stone and wood used in its frame came mainly from local sources, and it features a “green” roof planted with grass and shrubs as natural insulation).

Atwater set a new standard for commons dining at Middlebury, but the slump in the economy that began in 2008 forced a rethink in how board dining services can be offered on campus in a way that maintains the school's values while accommodating the new fiscal realities.

The solution involved taking one of the three operating dining halls off line. The logical candidate for this was Atwater, which had the smallest capacity. The other two venues were then modified to accommodate the larger crowds expected.

The seating capacity at Ross was raised from 275 to 450. Proctor, a 1959 vintage eatery that was scarcely changed from its original incarnation, received a much-needed overhaul to add more in-front-of-the-customers cooking capability and bring it in line with modern college dining trends.

Despite one less venue, Middlebury students still have plenty of meal options. The menus at Ross and Proctor are different, giving students daily choice at lunch and dinner. The chefs at each determine the fare, but the emphasis is on freshly made dishes made with locally sourced ingredients whenever possible.

Each dining hall seems to have its core of loyal regulars, but in truth, both have plenty of variety, certainly enough to offer everyone from hardcore vegetarians to pizza-and-burger traditionalists something they like.

For example, a typical day's dinner selection would include Chicken Saltimbocca, Shoyu Tofu and Chili-Glazed Salmon with Orange Salsa at Ross, and Bean and Vegetable Saute, Potage Basque and Roast Maple Glazed Salmon at Proctor. Ross also has various pizzas while Proctor has a panini press students can use to make their own hot sandwiches, and both have salad bars, a rotating series of side dishes and desserts.

Trayless dining has been the rule at the dining halls for the past two-plus years, and is noncontroversial. The initiative has not only cut down waste but saved water and energy (no trays or extra dishes to wash).

While Ross and Proctor satisfy the bulk of the day-to-day dining needs for students, Atwater has been reborn as a the primary special events space on campus, with its spectacular views, showy production stations and large open space. It also holds a liquor license, making it a natural for higher-end and evening events. It is also home to Middlebury's “language table” program (see p. 38) and for cooking oriented events and culinary exhibitions.

Atwater's new full-time role is crucial considering the reductions in campus catering services as part of Middlebury Dining's cost control measures. Among those measures was the elimination of off-premise catering services around campus (groups can still order food for their events if they pick it up, or they can choose an off-campus caterer from a list of approved providers).

The move illustrates a necessary change in mindset for Middlebury Dining Services, from the traditional role of a support department as a provider of an amenity to the institution, to taking a more commercial approach.

“We cut off-premise catering because after the staff reductions, it was just too labor intensive,” Biette says. “While we want to continue to support the college as much as we can, we also have to be more aware of the financial cost of the things we do.”

In addition to Atwater, campus groups can also utilize catering services offered at the retail outlets in the McCullough Student Center (for more on these, see below).

Middlebury Dining also caters events at the college's Bread Loaf Campus, located a few miles from the main campus in the Green Mountains.

The site houses the Bread Loaf School of English, a summer graduate school, and the prestigious Bread Loaf Writers Conference, the nation's oldest such event, which is held every August. Middlebury Dining caters all the meals for the conference.

There are some on-campus retail dining options in the McCullough Student Center, which includes the Grille and the Juice Bar, along with the MiddXpress c-store. However, student traffic has been slow over the past year, reflecting a new cost consciousness.

“Students say, ‘We already have meals paid for in the dining rooms, so why should we pay more not to eat there,’” says Biette.

The Grille, offering a set menu array of pizzas, sandwiches, salads and grilled items, is the main cash operation for full meals. However, the outlet is primarily patronized by staff and faculty during the day.

Students mainly come to the Grille in the evenings to socialize and play at the pool tables in the middle of the seating area (the Grille is open until 2 am Monday through Friday).

The Grille does offer one unique service — a takeout option that uses campus groups looking to raise funds as the delivery service. The groups sign up for specific times during which they make members available to deliver food from the Grille to locations around campus. There is a two dollar delivery charge for the first $10 in purchases and another dollar for every $5 after that, which the group keeps (along with any tips). It's an innovative way to grab incremental sales on delivery without adding extra labor costs.

The Juice Bar, primarily a place to grab a smoothie or a gourmet coffee or tea, also serves draft beer and wine, making it the closest thing to a campus pub at Middlebury (another alternative is the Bunker, a student-run nightclub with live/recorded music, but that is only open Friday nights).

The only other retail outlet on campus (other than the c-store) is a small coffee bar called the Wilson Café, just inside the main entrance to the library. There, customers can get coffees and other beverages, along with grab and go sandwiches, salads and sweets, to eat at one of the limited number of tables, or to take into the library itself.

Middlebury Dining also manages two small retail operations off campus, at the school's Snow Bowl ski area and at its golf course. These can generate some significant traffic during big events but most of the time they serve as amenities to support the school's activities while breaking even.

Middlebury College is noted for its language programs. That part of the curriculum has a dining component in the form of Language Tables, daily lunches where beginning and intermediate students can converse over a lunch meal with professors, staff and graduate students fluent in the particular language they are studying. Held in Atwater Dining Commons, where it is the only lunch served, the language table program is catered by the Atwater dining staff. The daily meals are served family style for maximum interaction. During the current semester, there are language tables in a dozen different languages (including American Sign Language), with the number of tables and number of days dedicated to each depending on level of interest and number of willing participants.