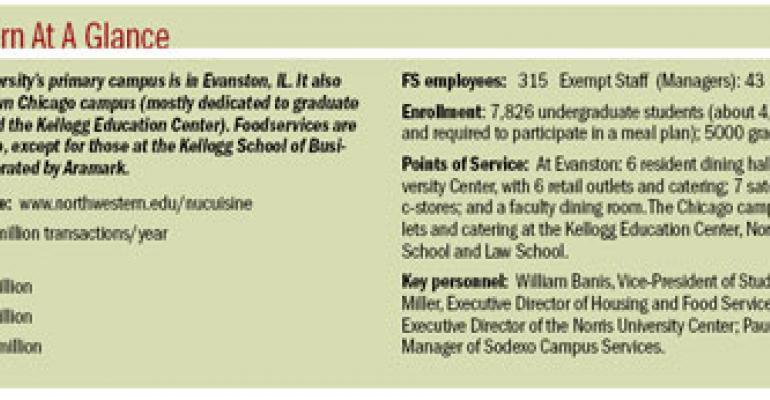 It's a perfect late September afternoon in Evanston, IL, with a light breeze from Lake Michigan cooling the crowds gathered on the Northwestern University (NU) campus on orientation day. A huge tent has been erected on the east lawn of Norris University Center and there is a festive feel in the air as catering begins for the President's Reception. The annual event welcomes the parents and families of this year's incoming freshman class of nearly 2000.

Buffet lines offer hand-carved roast turkey and top round of beef; accompaniments include artichoke and hummus spread, spicy corn and bean salad, sauces and flavorings to match any taste and a fabulous selection of fruits and fresh-baked desserts. There's even a strict kosher table overseen by a rabbi. It's a welcoming feast with an unmistakable message for those in attendance.

It's also a harbinger of meals to come. Students joining the NU community this year have access to a retail and residential foodservice program much different than the one they would have had a decade ago. Like many schools, Northwestern has migrated to a more retail-oriented program, expanding its dining hall options, extending meal convenience via new food establishments across campus and offering plenty of meal plan, cash and debit card flexibility to students.

While the visible results of such efforts are obvious, the behind-the-scenes challenges are less so. Establishing a financially — and operationally — sound balance between residential and retail dining on a college campus is one of the more difficult challenges a dining department faces.

At Northwestern, the retail transition has involved a broad restructuring of its outsourced foodservice contracts, development of customized residential menus and the opening of nearly a dozen new retail venues across campus. It has also involved a fresh look at the evolving role of the student union and a cross-departmental effort to recast the residential campus experience.

Since 1997, total foodservice revenue on the campus has grown 92 percent, to just over $27 million. Tellingly, retail sales overall are up 136 percent, to $7.8 million, with the largest percentage increase coming from incremental cash sales. These now account for well over $5 million of the total.

The transition hasn't been a simple one, and in many ways is still underway. But the results — financially, in terms of student satisfaction and in furthering community-building goals — are right on track.

A city in its own right

About 4,000 of NU's nearly 8,000 undergraduates reside on campus and are required to purchase meal plans. Another 2,000 live in fraternity or sorority houses or private homes just off campus, with the remainder commuting. It's a mix that demands lots of retail options as well as a strong residential dining and equivalency program.

“There are 11 residential colleges, eight of them themed, and 32 residential buildings,” says Garth Miller, NU's executive director of university housing and foodservice.

“Many house 50 or fewer residents, and these intimate pods of communities are part of the Northwestern experience.

“We've always sought to establish the campus as a city unto its own right,” he adds. “It is a critical part of the school's culture.”

In the late 1990s, residential dining took place exclusively in six dining halls located across campus. Retail options were cash-only and limited to the food court in Norris University Center, a student union that looks out over Lake Michigan on the east side of campus.

Meanwhile, the town of Evanston had exploded with retail and residential growth, opening up scores of new restaurants and entertainment options just outside the school's western gates.

“Foodservice always played a role in campus community, but it was becoming more important,” says Miller. “Incoming students had grown up dining in more diverse environments. That's what they demanded here, and they were going off campus to find it.”

“The administration was also concerned that our dining services did not adequately represent the school's founding goal, a university that represented ‘the highest order of excellence,’” adds Rick Thomas, executive director of NU's Norris Center. “Our vice president of university housing, Bill Banis, challenged us to raise the bar. That is what really gave impetus to our efforts to improve the residential and retail programs on the campus.”

At the time, residential dining was provided under contract by Marriott Management Services (soon to become Sodexo), while retail operations in Norris Center were outsourced to Aramark. Miller initially negotiated with both providers to offer some residential meal plan equivalency credits at Norris Center, but that approach created its own problems.

“When we first began to allow cross utilization of meal plan points, it ended up pushing a lot of the former cash customers out,” says Miller.

In peak periods, residential students armed with their new equivalency credits would over-run the retail locations, he recalls. Faculty and grad students, who didn't want to wait in the longer lines, began to go off campus. At one point, 65 percent of retail revenue, previously all cash, was coming from meal plan points.

“It became clear that in the future we would need much more portability than split contracts would provide,” Miller says. “We decided to combine all the foodservice in student affairs under one contract that would clearly spell out the direction in which we wanted to go, and we put out an RFP for it.”

In 1997, after an intense period of competitive bidding, NU awarded the contract to MMS/Sodexo, making it the school's primary foodservice operator.

That was the situation Paul Komelasky was assigned to the region as district manager. Tall, lanky and easy-going, Komelasky had originally earned his career stripes working for Saga. Northwestern represented the latest in a series of college campus assignments in which he'd continuously moved on to larger and more prominent campuses.

With big picture goals firmly in hand, efforts were begun to modify and integrate the residential and retail programs to better compete with the restaurants in town and to increase cash revenue, which had been flat for several years.

Responding to student demands for more meal plan flexibility, Miller and Komelasky began to meet with student leaders, sharing financial and overhead cost information and working to identify meal plan changes that would be acceptable to all. Unlimited dining options were added alongside traditional 19-16-13 and limited block plans. Point equivalencies were improved and plans made to completely renovate two dining halls — Allison and Sargent.

Meanwhile, Komelasky worked hard on the operational side, collaborating with staff and managers to add more ethnic and freshly-prepared foods to menus and to incorporate display cooking and better food merchandising into the straight line serveries. A “Global Chefs” program was introduced, bringing Sodexo chefs from around the world to campus to demonstrate various cuisines in themed meal events. As Allison's dining hall was remodelled, a kosher operation was expanded.

Dining services also strengthened its culinary support team with an executive chef at each hall who was charged with giving the facility its own food personality. The four week rotation menus were scrapped and staff focused on developing more authentic and seasonal offerings.

These initiatives were branded as what is still known on campus as its nuCuisine program.

“Initially, it was a way for us to be more closely identified not just as the food contractor, but as a true partner with the University,” says Komelasky. “Since then, nuCuisine has become much more than that — a way of looking at dining on campus as a whole, and the brand is now closely associated with campus life here.”

“Everyone struggles with how they can build a stronger sense of campus community,” he adds. “We approached it by looking at the campus not as a city entity, but as one with individual ‘neighborhoods.’ Then we looked for strategic retail locations in those neighborhoods where we could offer food to those smaller communities.”

Miller was able to obtain data on all of the class schedules and attendance numbers across the campus each day. Then, he and Komelasky strategically evaluated meal and traffic patterns in that context.

They started on the north end of campus where a heavy fraternity community was pushing for late night service. In fall of 2002, the department opened Lisa's Café there. With its signature “checkerboard” tables and late night hours, it was an immediate success and now reports sales close to $900,000 a year. Soon after, the Plaza Café opened in the University library.

Bringing in incremental retail cash revenue remained a primary goal. By the fall of 2004, NU had opened up five new retail locations and renovated several others, several of them geared primarily to cash customers. These included an Einstein Bros. bagel concept in Pancoe Hall, Tech Express in the school's Technological Institute, Recovery Room Café at the Medical School and the Crowe (Hall) Café.

In contrast to Lisa's, which attracts a large percentage of meal plan customers who use equivalency points, these were in academic areas of the campus and targeted students and faculty who did not have time between classes to go to Norris. Hours were customized to match class schedules and reduce labor requirements.

Over time, four c-stores were also opened, three geared to residential student needs and one in Norris Center targeted to commuters. for a look at how the c-stores’ product mix and customer base varies, see “4 Faces of a C-Store.”)

“We built financial models for each unit based on our estimates of the cash-to-sales ratio we thought they would achieve,” says Komelasky. (For resident operations, he looks for 15-25 percent cash to total sales; for non-resident locations, 65 percent and up for cash to total sales.)

“Cash sales growth is the real measure of what kind of business each retail location is drawing,” he adds, and the product and menu mix for each location were also designed with this in mind.

Norris Center's unit mix was redesigned to make it more of a destination (see Strategic Thinking For Student Unions) with the addition of a new Starbuck's operation and concepts like Crepe Bistro, which Komelasky says has proven a highly flexible draw during all dayparts, including late night dessert customers.

My Meal My Way

In 2003, a three-tier equivalency program was introduced that offers different dollar values depending on the mealpart ($4.75 for breakfast, $6.60 for lunch and $8.50 for dinner). Giving higher equivalencies for dinner appealed to meal plan holders “even though we did not experience a major change in evening dining hall traffic as a result,” Komelasky says.

There, although much of the menu remains static, “the fact that customers specify choices from the kiosks gives a sense of ordering a customized meal,” says Komelasky. “Willard — which traditionally had one of our lowest satisfaction scores — increased participation over 20 percent, with satisfaction increasing 50 points, into the high 80s,” he adds.

The department has its own Facebook page, which has proved an effective way to run dining promotions. This year it will also experiment with texting promotions.

As the campus retail mix has reached greater maturity, “it is critical that we understand who our target customers are,” says Rick Thomas. “That determines how the financials need to work. We would like to see all the retail outlets outside of the student union — those where we have more control over the hours of operation and the product mix — stand on their own financial merits.”

Future plans include further modernization of the food court at Norris to incorporate concepts with the style and labor flexibility offered by casual restaurants. Komelasky also believes there are opportunities to further penetrate the southwest side of campus where a large sorority population exists.

“At the same time, breaking bread together remains a basic community activity. The expansion of our community space beyond the walls of the student union is an important reflection of the culture of our campus.”