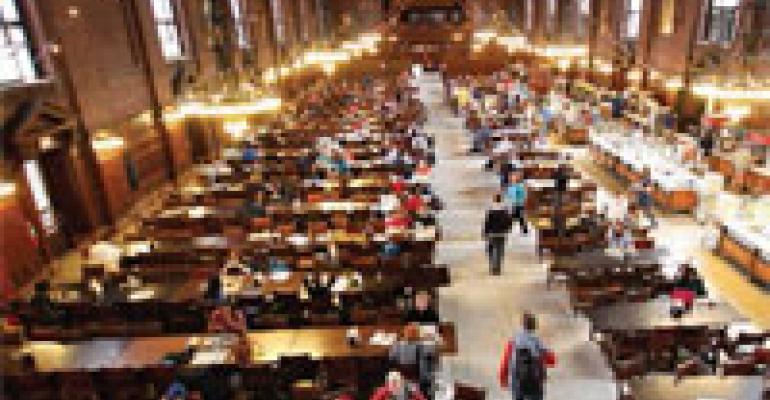 Interviews with three former college foodservice directors who have moved into administration point to some of the challenges the segment will face in 2011.

Higher education has come under increased financial pressure in recent years as state appropriations, endowments and gifts have declined. At the same time, the long recession has made it harder for students and families to afford tuition increases.

“Financial concerns are top of mind for every institution today and dining won't be spared that concern,” says Gladu. “It is the same at every institution, regardless of the nature of the revenue streams they have come to rely upon.”

Many schools floated bonds to cover capital cost investments for housing and dining in recent years, “and even though auxiliaries may generate their own income to pay these obligations, universities are looking for additional revenue to augment the central budget,” agrees OU's David Annis. “That can put pressure on departments in terms of funding day-to-day operational needs.”

Community college transfers can change the dining culture. “In tough economic times, state schools find more students spend their first year or two in a community college, then transfer their credits to the university,” says Annis. “Auxiliaries can be affected by that — most dining programs depend on the predictable income from mandatory freshman meal plan requirements. If students arrive at the school later, they don't have the exprience with or loyalty to on campus dining they would have had otherwise.”

“It is not just about trimming costs or right-sizing,” says Gladu. “It is about fiscal strategy, about discerning what is essential and necessary to enhance programs and executing at a time when unbridled growth is not possible.

“The challenge will be — 'we have X but that X needs to be a better X and in some cases, a bigger and better X. But it can't cost X-plus.' It is about demonstrating that a program is continuously improving even without further investment.”

Constraints on the ability to reward valued employees with pay increases is a problem for many, Bando says. “The recession has meant rention isn't as large an issue as it could be, but directors I know are working hard to reinforce job satisfaction in other ways. The issue is out there.”

Larger overhead burdens are inevitable, “but dining won't be singled out,” says Gladu. “Administrations will also look to housing, athletics, other sources. You can only charge so much for a meal plan, so there's a limit to how far that can go.”

The other side of the equation is cost-cutting, “and directors will struggle with how much they can reduce costs before the institution appears to be in a rollback or downsizing mode,” he adds.

Expectations for financially sound, out-of-the-box thinking are increasing. Directors should develop plans they can use when unexpected demands come down the pike, Gladu says.

Saying it is critical to “work smarter” is one thing, but “there are only so many great ideas out there,” he adds. “The easiest solution to any problem is one that costs money, but that is not going to be a viable approach in most cases.”

Gladu offers a pragmatic example: “a director may be told the meal plan price can only increase one percent in the coming year, but that the program will have to absorb a wage increase that will not be funded. Meanwhile, food costs are up 2-3 percent and service quality has to be maintained.

“Solutions to accomplish goals like that are not something that comes from a textbook. It requires a complete familiarity with every aspect of an operation to see where strategic changes can be made to produce desired results.”

That isn't just an issue for directors, adds BC's Bando. “Better ROI analysis is necesssary to justify anything today, and we have to teach that to younger managers in the pipeline. Although we appreciate their good ideas, they need to learn to position ideas correctly and modify them as necessary so it is clear they either measurably decrease costs or increase revenue.

A challenge for directors is “to not become consumed with tasks, even though change and innovation are often task-driven,” says Gladu. “If you let tasks dominate your thinking, you lose sight of what you are trying to accomplish in terms of the broad goals of the institution.”

Competition could spur innovation. “Off campus, the restaurant industry has been in shakeout mode. When it's a matter of survival, operations try many things to save themselves.

“The silver lining is that competition spurs innovation, and technology may make new opportunities available to directors. Say a student about to get out of class doesn't want to wait in line. New services could allow him to use a smart phone to order and pay for a meal that could be picked up a few minutes later. Other approaches might help operators level out high traffic shoulder peaks and perhaps allow them to take out some labor from operations.”

“You look throughout an operation for new ways to grow the business,” says Annis. “Events held off-campus are an obvious one. In some cases taking on the concession business is an opportunity. But finding places to reduce costs is often even more important.

“We're in an environment where every student and faculty member believes he or she should be able to get a quality meal for $5. In that context, it's very hard to generate revenue without cutting the perceived quality of service or food. It means making sure the operating dynamics of every unit is at the very top of its game.”

Nutritional labeling on chain menus may have an impact, “but it's a wait and see game,” says Annis. “Most colleges already have that information available in some way already and it remains to be seen if they will have to post it in a different way under new rules.”

“K-12 nutrition education programs will have an impact on our incoming customers,” believes Bando. “Just look at the impact ecology classes had a few years ago — that is part of the reason for all the interest in sustainability we see right now.”