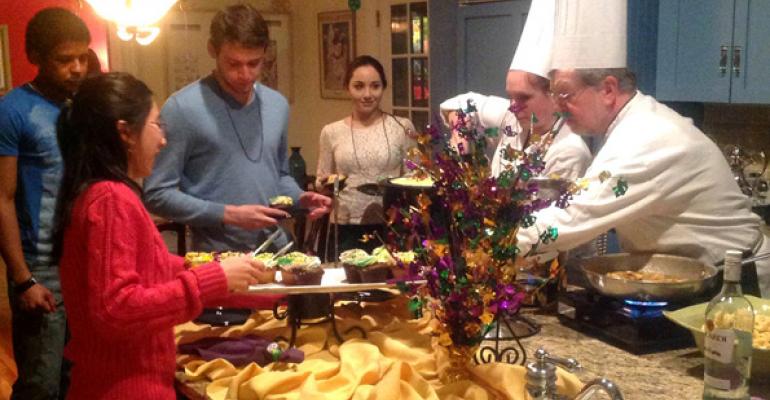 The University of Connecticut’s catering department will do more than 4,900 events and $3 million in sales this year, but a tiny break-even dinner for 50 students last month might have been the most innovative.

At 6 p.m. on March 4, a UConn shuttle bus picked up a group of students outside the student union on the Storrs main campus and transported them to a secret destination. They were taken to an old and rarely used mansion owned by university donors on the outskirts of campus, where they walked into a festive Fat Tuesday feast. It was the school’s second pop-up dinner, a trendy idea that came from UConn’s Director of Dining Services Dennis Pierce, who found inspiration from commercial restaurants and chefs looking for exposure.

“All these restaurants in New York and Chicago are doing it to get some backing and to build a following,” Pierce says of the idea. “Our catering has some slow times during the academic year, so why not give the kids with meal plans an experience they wouldn’t normally have?”

Steve Wojtyna, general manager of catering for UConn, took the idea and ran with it.

The date and time for the secret events are announced in advance and open to the first 50 or so students who sign up with an email address and by swiping their meal plan card. Hours before the designated event, instructions are sent via email and text messages.

“It’s a monotony breaker and nice for the students used to eating in the dining halls,” says Wojtyna. “Plus it’s also a chance for my staff to do something different.”

The value of the pop-up dinner

The pop-up dinners are promoted through the school’s e-newspaper and social media and scheduled for slower times when the catering department doesn’t have any major events. The cost to students is one dinner swipe.

“It’s almost a wash,” Wojtyna says. “We don’t use any overtime and plan it when nothing is going on.” At the Fat Tuesday fete, just two servers, two cooks and one supervisor were needed to execute the event with stations spread throughout the house. The kitchen, though, was the hot spot where the Bananas Foster was prepared and where most of the students congregated.

“I like the fact that students can really experience the culinary art of our catering staff,” Pierce says.

The value of such an event isn’t measured by whether it makes money. “It’s a perk for the kids,” says Pierce, adding that from a marketing perspective, it’s also well worth it: “From coverage in the student paper to word of mouth, it more than pays for itself.”

UConn is already planning a third pop-up dinner and aims to have one every semester. The first event last year was in an unused dining hall in October, with employees dressed in costumes.

“This is a chance for us to use our creativity,” Wojtyna says. “Everyone had a blast and it’s nice to go out and interact with our students.”

The students, judging by post-event comments, ate it up. The “atmosphere” and “elaborate decorations” were what stood out to one student, while another noted the “massive sandwich” that was probably “longer than me.”

UConn’s catering department is equipped to handle much larger events after a significant renovation last year. A 8,400-square-foot standalone catering center houses the entire department, including a spacious kitchen and a new sales area.