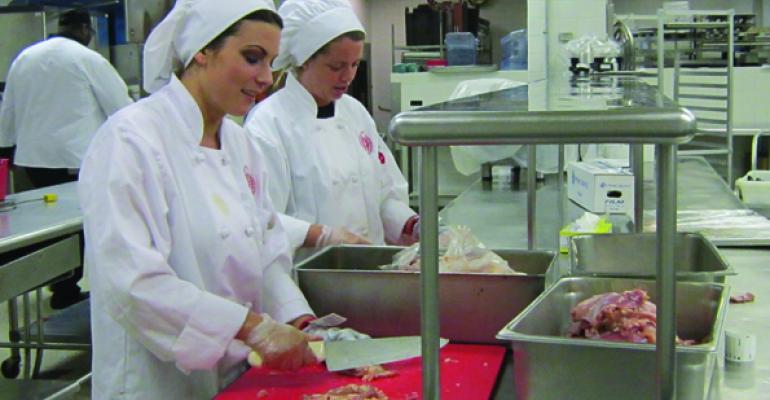 Sodexo is working  with the hospitality and dietetics department at Montclair State University to give its students practical experience and training.

As Montclair's dining services provider, Sodexo has partnered with the program in the past but now has begun providing formal culinary and academic training for 150 students a year. The three-credit class, Quantity Food Applications, prepares students for careers in food science, food management or as registered dietitians.

They start a semester receiving management, safety and culinary training in MSU’s state-of-the-art Food Management laboratory, with some instruction coming from Sodexo's handbook on protocols and procedures. They are then placed in one of several Sodexo kitchen facilities on the campus. The program launched this past summer with 30 students and was expanded to 60 for the fall term. Another 60 are scheduled to take the course next spring.

“As the program grew, we found it increasingly difficult to find sites for all of them,” he says. There were also instances where students had transportation problems getting to more distant sites.
The department found itself increasingly turning to Sodexo to help out. Eventually, both sides realized the advantages of a closer relationship and a program was formally drawn up. For MSU, the benefits include easier and closer oversight.

“Previously, we had little control over the external operations where students were placed,” Dr. Feldman says. “Now, we work with Sodexo on the focus we want to see and pre-train the students on Sodexo procedures before they begin working there.

Sodexo, meanwhile, gets the benefit of the students’ efforts, as well as a potential pool of future candidates already familiar with its operating philosophy.