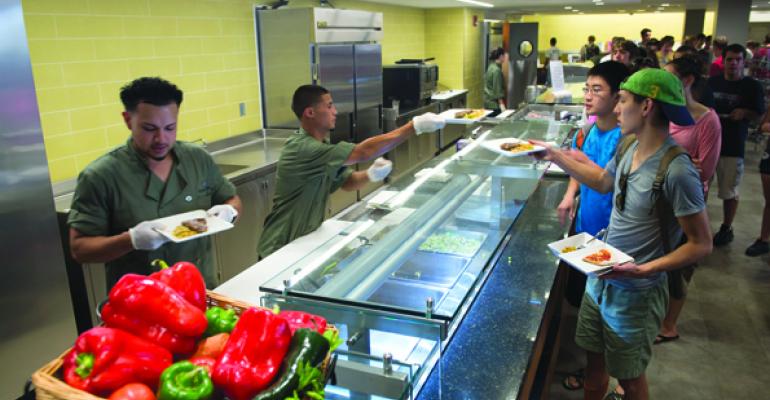 The University of Connecticut Dining Services has reopened its renovated McMahon Hall dining facility, featuring a new international theme, display cooking and more seating. One of eight residential dining units on the Storrs campus, McMahon, first opened in 1964, underwent a $9 million renovation that expanded its size to 9,500 sq.ft. and increased seating from 374 to about 530.

The work also incorporates environmentally friendly practices such as composting and the addition of energy-saving kitchen equipment, lighting, windows, and other items. Construction started in March and was completed in early August, with the first meals later that month.

It is located in the same facility as UConn’s International Center and the Global House Learning Community, which draw students from around the world. That population profile made the international theme an ideal fit for the renovated facility, which is in the center of campus and is a popular dining choice for students, says Dennis Pierce, UConn’s director of dining services.

“Dining Services will be drawing from a large international array of menu selections,” including home-cooked recipes, he notes.

The facility will include an “open kitchen” concept, in which meals are prepared in the dining area where customers can watch and interact with the chefs. Two tandoori ovens have been installed for the preparation of specialties popular in India and other countries.

All areas except the salad bar and deli have moved to a “small plate” concept, an approach in which diners select a variety of items for a chance to try various dishes.

The servery layout has been specially designed to allow easy circulation for patrons between the stations and the seating areas. There, a combination of lounge and café-style seating is available. Flexible furniture and a section that evokes a homey "living room" promote a convivial atmosphere.

The renovation was guided by Pierce and Dining Services Area Manager Eric Janssen, along with Katherine Viveiros, a senior project manager from UConn’s Office of Architectural, Engineering and Building Services. Bruner/Cott of Cambridge, MA, served as architects and planners, and the renovations were done by Prellwitz Chilinski Associates (PCA), also of Cambridge.