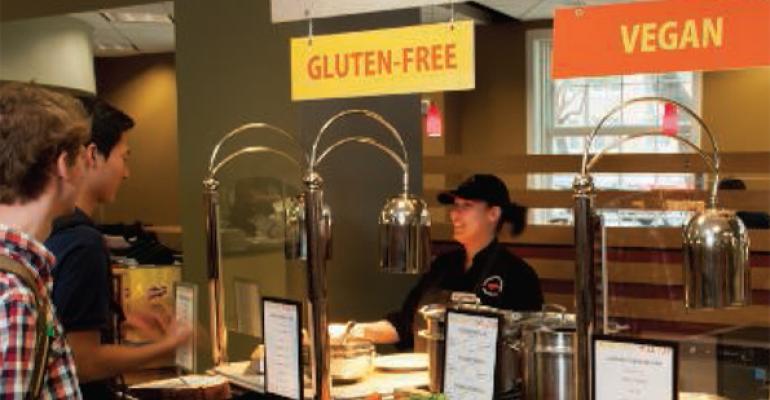 "Healthy on the Hilltop" offers alternatives to students with special diet needs.

The newest addition to the dining mix at Southern Methodist University is a vegan/gluten-free station called “Healthy on the Hilltop” that was recently launched in response to student feedback. The eatery, managed by SMU’s campus dining services provider Aramark Campus Services, offers meals that include an entrée, two sides and a dessert but are 600 calories or less.

“About five years ago we wanted to do something to offset the ‘Freshman 15’ and came up with a spa cuisine concept that we then enhanced that with a program that delivered full meals under 600 calories,” says Aramark District Manager Michael Marr. “It worked well, but after a couple years we began noticing a growing number of students prone to Celiac disease, so we incorporated vegan and gluten-free selections into the mix as well.”

Healthy on the Hillside is part of the board plan and is located in the all-you-care-to-eat Real Food on Campus dining hall in the Umphrey Lee Center. It offers several vegetarian entrées (at least one also being vegan) and several gluten-free selections each day. Up to 600 students patronize it on an average day, part of the some 2,600-plus that pass through the Umphrey Lee dining venue daily. Nutritional information is posted both at the station and also online to guide students on the choices.

Aramark’s student surveys indicate the station has been a welcome addition to the campus dining mix, with half of respondents indicating that the top improvement in the dining program from the previous year has been the increased variety of healthy options, including the vegan and gluten-free selections now available at Healthy on the Hilltop.