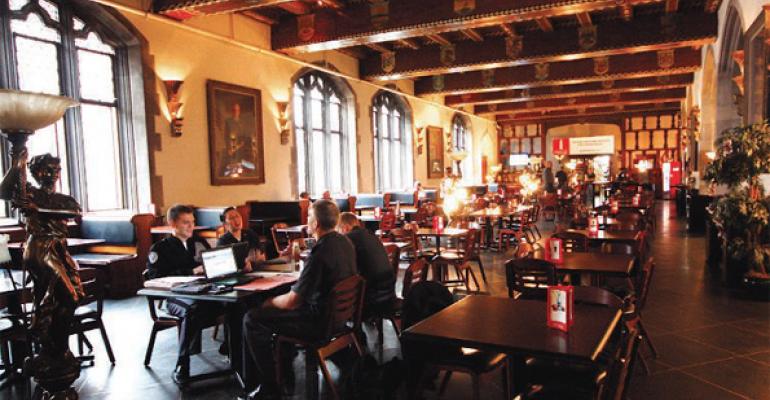 The United States Military Academy at West Point, NY, is one of the most tradition-oriented institutions in the country. It’s fabled “long gray line” of graduates stretches back to its founding over 200 years ago and includes such notables as Ulysses S. Grant, Douglas MacArthur, Dwight D. Eisenhower and even baseball inventor Abner Doubleday.

But just because West Point is traditional doesn't mean it doesn’t embrace modern technology. Take the online remote ordering system that has streamlined throughput and improved both the menu and the customer experience at one of the Academy’s highest-volume foodservice operations: Grant Hall.

The eatery, a retail mini food court with grill, deli and pizza/pasta stations, was losing potential business because long lines discouraged some customers.

Today, with a system called Nextep, customers can place orders through their computers or two kiosk ordering units just outside the servery. Up to 80 percent of customers now use this option, says Kevin D’Onofrio, food service director of the Cadet Restaurant Branch that operates Grant Hall and 10 other West Point dining operations.

“The kiosks were implemented because we wanted speed of service and portion control,” D’Onofrio offers.

Grant Hall’s remote-order-powered dining operation generates over 200,000 sandwich and more than 400,000 pizza and pasta orders. D’Onofrio estimates that business has increased 20 to 25 percent because of the new system. Check average has also bumped up, and annual savings due to better portion control are as much as $71,000.

The biggest impact seems to have been on burger sales. Rather than pre-made choices with limited toppings, hurried cadets can now get freshly made burgers with a range of toppings and sauces without waiting.

The online option is also expected to boost deli sales by eliminating wait times for made-to-order creations. “People who are reluctant to come here between 11 and 1:30 because of the lunch rush can now pre-order online and have their meal waiting instead of standing in line,” D’Onofrio says.

Each station has its own pick-up area for remote orders, each tagged with the order number. Electronic display boards at the two servery entrances show the status of each order, and customers can also opt to have a text message sent to their phones upon order completion.

Payment is at the pickup register to encourage impulse purchases. “I don’t want them just going in and picking up without having a chance to shop for other items,” D’Onofrio says.

The next step, he adds, is likely to be a smartphone app version of the remote order program. He also plans to add the option to other restaurants his department operates, such as a sports bar and athletic concessions.