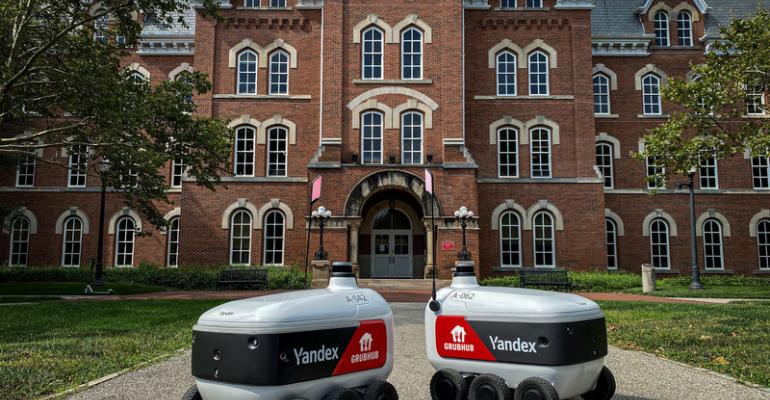 Grubhub
Ohio State University and the University of Arizona are losing their food-delivery robots for now because of Russia’s invasion of Ukraine.
News & Trends>Colleges & Universities

This and Levy partnering with pay-by-face firm PopID are some of the tech-related developments you may have missed recently.

Ohio State University and the University of Arizona are losing their food-delivery robots for now because of Russia’s invasion of Ukraine as Grubhub says it is ending its partnership with Russian tech company Yandex and pulling 100 Yandex-made food-delivery robots from the campuses. Chicago-based Grubhub said it is working with both schools to find alternatives to the robots that had been doing 1,000 deliveries a day between the two campuses.

Facial recognition software company PopID is partnering with venue and event management company ASM Global and sports/entertainment venue concessions and catering firm Levy to install its PopPay pay-by-face technology and PopEntry authentication software at venues around the world. The first implementation will be at Pechanga Arena in San Diego, according to Levy.

Read more: PopID Wants You to Ditch Your Cards and Pay With Your Face

High-tech vertical farming business Fifth Season is planning to add a second, much larger facility in Columbus, Ohio, to build on its existing 60,000-square foot growing space near Pittsburgh had already supplied some 500,000 pounds of its produce to nearby restaurants and campus dining locations in its first year. Fifth Season’s automated proprietary system grows fresh produce year-round indoors in vertical trays, relying on artificial intelligence, robotics and data to control light, water and nutrients, and harvest leafy greens. “Our smart manufacturing facility improves the yield, taste and texture of the vegetables, and does that with 95% less water, 95% less land, and uses no pesticides or chemicals,” says company founder Austin Webb.

Read more: Next to the last steel mill in town, a robotic farm grows backed by Pritzker billions

Gordon Food Service, one of the largest regional foodservice distributors in the U.S., is trialing a bowl-making robotic salad station from vendor Dexai Robotics in its test kitchen in Grand Rapids, Mich. that it may eventually deploy in a managed cafeteria or in one of its nearly 200 stores it operates in the U.S. and Canada. The robot, called Alfred, has already been deployed to 10 military bases across the U.S. and Dexai plans to continue developing new robots to handle tasks such as plating food and serving drinks, which could expand the locations the robot finds itself in the future.

Starship Technologies has deployed 25 robotic food carriers for the spring semester at the University of Tennessee, the latest campus client for the company's high tech delivery units. They deliver food from 13 dining spots on campus between 8 a.m. and 4 p.m. to customers who order on the Starship app and can use campus dining dollars to pay for it.