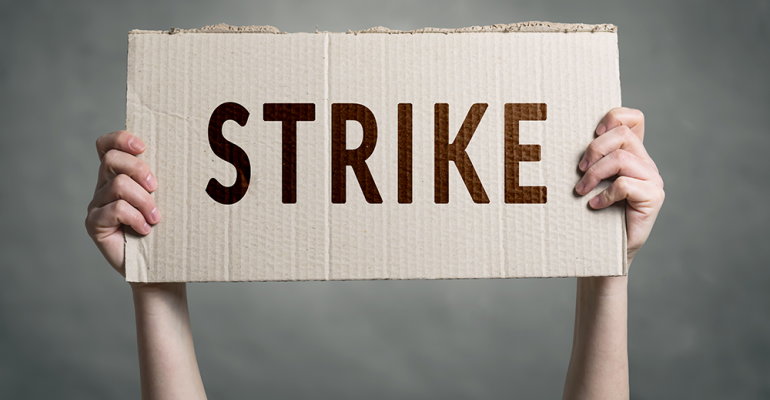 SandraMatic/iStock/Getty Images Plus
At Cedars-Sinai Medical Center in Los Angeles, more than 2,000 employees, including food service workers as well as other service staff, have voted overwhelmingly to authorize an unfair labor practice strike in May, claiming they are understaffed, underpaid and dealing with inadequate COVID-19 protections.
News & Trends>Colleges & Universities

This and George Washington University delaying the opening of a major new campus dining venue are some of the stories you may have missed recently.

As staff shortages challenge onsite dining programs, existing workers at some large, prominent institutions are upping the pressure to boost compensation and adjust work conditions. At Cedars-Sinai Medical Center in Los Angeles, more than 2,000 employees, including food service workers as well as other service staff, have voted overwhelmingly to authorize an unfair labor practice strike in May, claiming they are understaffed, underpaid and dealing with inadequate COVID-19 protections.

Meanwhile, more than 300 campus dining, grounds and building service workers at Illinois State University have issued a 10-day notice of their intent to call a strike if necessary. According to a local report, ISU dining employees say pay is so low that the university struggles to retain workers or hire new ones, forcing those who remain to do double or triple their usual work with substandard compensation.

The dining hall that George Washington University (GWU) planned to open in its District House venue at the start of the upcoming academic year as one of three new all-you-can-eat dining halls supporting its transition to a new unlimited dining plan will not open on time. “The District House experience will be introduced later in the 2022-2023 academic year,” a GWU press release states. Starting this fall, GWU will require freshmen and sophomores to purchase one of three meal plans starting at $2,700, which includes unlimited dining hall swipes and varying GWorld balances, while incoming juniors and seniors have the option to continue with the traditional meal plan completely composed of a declining GWorld balance.

Cafeteria workers in Wake County Schools in North Carolina, one of the largest public school districts in the country, will get up to an additional $1,350 in bonuses as a way of thanking them for staying on the job during a time of extensive staffing shortages following a vote of the school board to use COVID relief dollars to provide school nutrition workers bonuses ranging between $450 and $1,350 depending on whether they’ve worked the full school year. The new proposal comes on top of other bonuses and raises that have been given to recruit cafeteria workers, who are among the lowest-paid employees in the school district.

A California law requiring grocery stores and restaurants to donate leftover food has been hard for local food banks and small towns to implement due to climbing fuel costs and uncertainty over who pays for food recovery. "I can't send the truck all over town, picking up leftover sandwiches," said Tom Dearmore, director of community services at the Butte County Community Action Agency, which houses a local food bank. "The more we have to spend on fuel, the less food we can buy. It's pretty cut and dry."