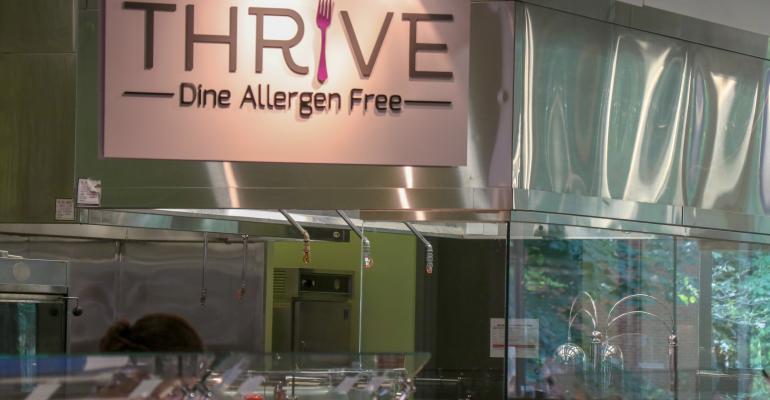 Michigan State Culinary Services
Thrive is open only for lunch over the summer but will expand to serving dinner when the fall semester begins.
News & Trends>Colleges & Universities

Thrive is designed not just to meet the needs of students with dietary restrictions but anyone looking for fresh, healthy food.

Single stations that menu only food free of designated allergens have been proliferating across the onsite dining landscape as awareness of the dangers of food allergies has grown. Michigan State University has taken that approach a step further with the debut of Thrive, a full all-you-care-to-eat (AYCTE) residential dining venue—the school’s tenth such facility—that exclusively serves dishes completely free of the eight most common food allergens: milk, eggs, soy, wheat, peanuts, tree nuts, fish and shellfish, as well as gluten. It is also “sesame-conscious,” which means sesame won’t be used in any menu items.

Situated in a space that formerly was occupied by a standard retail dining outlet, Thrive was given a soft opening in early July to test the concept and work out any wrinkles. It was open only for lunch during this trial period but will be scaled up to staying open for both lunch and dinner a week before the start of fall classes Aug. 28.

The soft opening “has been going really well,” says Jordan Durkin, the station’s supervising chef who created the recipes being used at Thrive. “It hasn’t been overwhelmingly busy yet, but we’ve had a lot of positive feedback from it. The people who have issues with these allergens are really excited to have something like this in the community.” 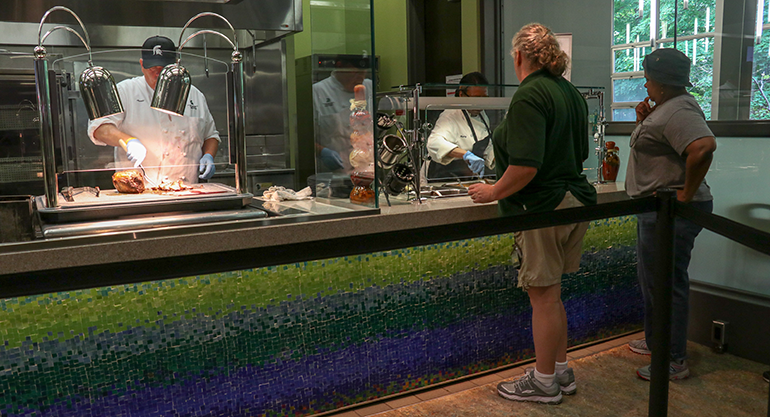 Thrive is not a single station but a multistation AYCTE dining venue.

“Because this is a new concept for Culinary Services and the university, we truly don’t know what to expect,” adds Gina Keilen, a staff registered dietitian who spearheaded the Thrive project. “We know there’s demand from our guests and the population we serve, but as to the overall numbers that will come through, our forecast is totally a shot in the dark. However, [the soft opening] gives us a chance to gauge the population and get some word of mouth out there.”

Granted, she adds, students and staff have always been able to find dishes across campus that accord with their diet restrictions, but at Thrive “they can just come in and not think about it or worry about it.”

Like most AYCTE dining halls, Thrive has multiple stations. They include three serving stations and a full salad bar, with one of the stations making a concession to tradition.

“One of the biggest sellers that was here before [in the retail outlet] was chicken tenders and fries, and we didn’t want to take that away, so we figured out how to do a homemade chicken tender and fries that is somewhat customizable with different seasoning blends and mostly homemade sauces,” Durkin explains.

Another station specializes in street food-type dishes such as grain and rice/noodle bowls, tacos and tostadas, while a third offers “meat and potatoes” type homestyle/comfort foods. It includes a rotisserie oven that turns out treats like pork loin and even duck.

As the Thrive outlet occupies a space that was previously a traditional a la carte retail outlet, one marketing challenge will involve educating returning students about the new AYCTE model of the space. The location is in the middle of the campus, near a bus station, so it is in position to serve both middle-of-the-day lunch crowds and then also dinner as it isn’t far from dorms. 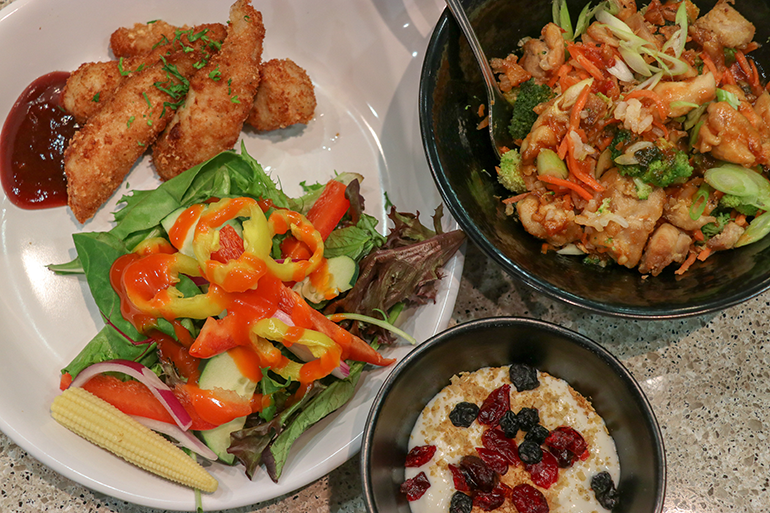 The menu approach is to offer dishes that are familiar and popular with college-age customers, except without the eight most common food allergens or gluten or sesame.

Also, because Thrive functions as a standard AYCTE dining venue—it takes regular meal swipes just like the other nine AYCTE facilities on campus—another marketing challenge is convincing students who don’t have food allergies to patronize it.

“Sometimes [eliminating food] allergens can steer people away,” observes Keilen. “We get the question so many times—‘If you’re not having the top eight [allergens] then what exactly are you serving?’—so we’re trying to change the perception of what allergen-free really means.”

She credits Durkin with developing recipes that mimic dishes such as grilled cheese traditionally popular with college-age individuals so that those with certain food allergies can also enjoy them. Also, serving them in a venue open to all customers allows food-allergic individuals to dine with non-allergic friends on fare everyone can enjoy.

Of course, converting a space from a traditional dining outlet to an allergen-free one is more complicated that simply changing out equipment or putting up new décor. The conversion of the Thrive space was planned months in advance. Once spring classes ended this past May, the venue was shut down for three weeks for a deep clean—“from floor to ceiling and wall to wall and everything in between,” Keilen says.

Staff also had to be trained to be aware of potential cross-contamination dangers. The venue has its own equipment, supplies and even uniforms as well as dedicated storage spaces to minimize any contamination opportunities.

Fortunately, specialty product requirements are minimal though acceptable replacements for some problematic items such as flour had to be found. Durkin’s challenge was to find substitutes that not only lack the allergens but still produce the same—or very similar—flavor and mouthfeel.

And since Thrive is an AYCTE venue, it requires many more recipes than a single station would, especially as it has to serve two dayparts once it’s in full operation.

“That was one of the most challenging things I’ve done in my career as a chef,” Durkins offers, “but it was also a fun process because you have to take those basic things like mac ‘n cheese and ask yourself, how do you make them without those [prohibited ingredients]. Or how do you make great mashed potatoes without constantly putting butter or milk in it?”

He has close to a hundred recipes now, helped in part by looking at the pre-existing department recipe database and pulling out those that meet the requirements for not having any of the prohibited allergens.

“Because allergens are of such increased prevalence and there’s such a growing need [for allergen-free alternatives], we’re trying to do what we can to stay current in it and meet the demand from our guests,” Keilen says.