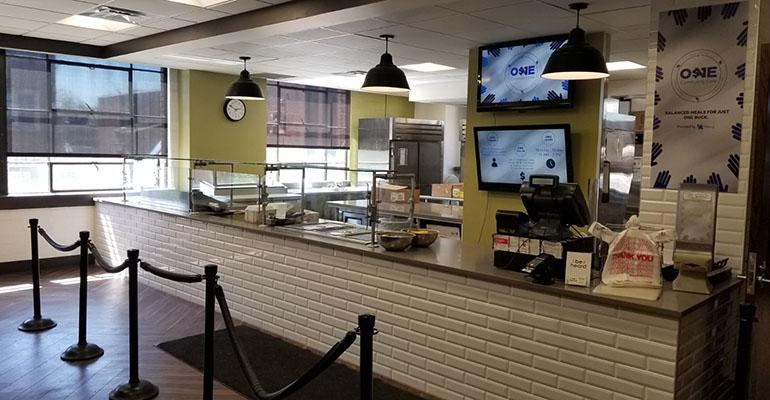 ONE Community Café is located in a space formerly occupied by another retail café concept in UK’s Erikson Hall.
News & Trends>Colleges & Universities

To help combat food insecurity, the ONE Community Café at the University of Kentucky offers a combo of a protein, starch, vegetable and fruit for one buck to all enrolled students.

How do you deal with food insecurity on university campuses? Strategies range from at-cost grocery stores to meal donation programs and other initiatives designed to feed needy students.

The University of Kentucky (UK) and its dining services provider, Aramark, decided on a different and rather radical approach: A café that serves a full meal consisting of a protein, a starch, a vegetable side and a piece of fruit, all for a dollar. In fact, for just another buck, they can also get a second meal wrapped up to take out, that can be eaten later.

The new eatery, called ONE Community Cafe, is open to all students, regardless of economic status, which eliminates any stigma associated with needing to receive a low-priced meal. It replaces an existing traditional retail café called Fusion in UK’s highly trafficked Erikson Hall and is open weekdays between 10 a.m. and 2 p.m.

“The food insecurity [issue] has been cropping up all over the country and we’ve been talking about it for the last four to five months with our university partner,” says Pulkit Vigg, Aramark’s resident district manager, who came on board at UK Dining last January. “Then recently we had the hunger strike and the [university] president committed to taking care of the needs on campus right now. This accelerated our timeline. We were thinking of doing some fact-finding [and so forth] over the summer, but there was a true need now, so we decided to pilot this for the rest of the semester.”

Incredibly, ONE was developed and launched within a matter of just three days, Vigg claims. The hunger strike ended April 2 with UK President Eli Capilouto pledging to address the housing and food insecurity issues the students raised. That led to discussions between the university and Aramark on how to respond, followed by the decision to create and launch a low-cost café the following week.

ONE opened April 8 after a frenetic weekend of preparations.

A key factor that allowed such a quick deployment was the ready presence of a suitable location as the Fusion station already had the necessary infrastructure, so only some cosmetic changes were needed.

The nutritious aspect was satisfied by having the menu developed collaboratively by the campus executive chef and dietitian, while accessibility isn’t much of a problem as the Fusion café space is a familiar one to most students.

“As for inclusive, you don’t need a stamp or [validation of] food insecurity to go there,” Vigg says, “so there is no shame. It’s used by students who have the need and also by students who are strapped for time and are in the vicinity, so it’s good for everyone.” 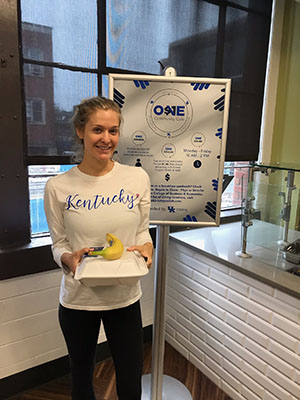 Students need only show a UK ID to be served.

The initial menu, obviously put together in a hurry, “will evolve as we go along, keeping in mind what the students will actually eat,” Vigg explains, adding, “It’s not about cost, it’s about acceptability.”

The first day’s offering included grilled chicken with mashed potatoes and broccoli, followed the next day by pork loin with sweet potato mash and broccoli. Top round with roasted potatoes was planned for day three.

The meals are fixed with specific portions of each ingredient—four to five ounces of the protein depending on what it is, and four ounces each of the starch and vegetable. Each meal also comes with a piece of fruit, while the beverage option right now is ice water.

There is, of course, a financial aspect to a café offering such a low price. Vigg says the cost is currently being borne in tandem by UK and Aramark. Alternatives such as sponsorships by local businesses may be explored over the summer after the pilot phase ends with the end of the spring semester May 3..

Also, he reports that students associated with the local chapter of the Campus Kitchens movement have expressed an interest in manning the station on a volunteer basis, which would of course reduce the operational cost, but that is another thing being put off until the pilot phase is over. Vigg does report that using student volunteers at ONE would pose no union or labor issues, though they would have to be vetted and trained first.

ONE drew 124 diners on its first day, which is about twice as much as Fusion attracted the previous Monday, Vigg reports.

“The feedback we’re getting is extreme thanks and a lot of gratitude, but for us, it’s more about compassion, doing the right thing and being the leaders in solving this problem,” he adds.