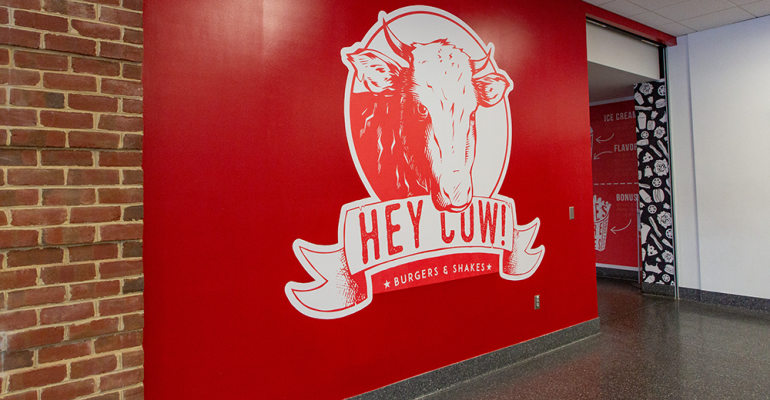 Photos: Sodexo
Hey Cow! (the name refers to a car game that requires passengers to yell out at cows seen near the road) incorporates elaborate graphics both inside and at its entrance to make it stand out in Liberty University’s Montview Student Union.
News & Trends>Colleges & Universities

Hey Cow! menu of burgers, fries and shakes was developed with the aid of taste tests by the Sodexo team at the school.

How do you shake up an underperforming concept? Well, first you ask the customers what they want.

It was that simple formula that has led to the spectacular success of a burger concept called Hey Cow! that replaced the underperforming UFood Grill concept in Liberty University’s Montview Student Union complex last fall. To date, Hey Cow! has racked up a seven-fold increase in sales at the location compared to what the previous concept in the location, UFood Grill, was generating. 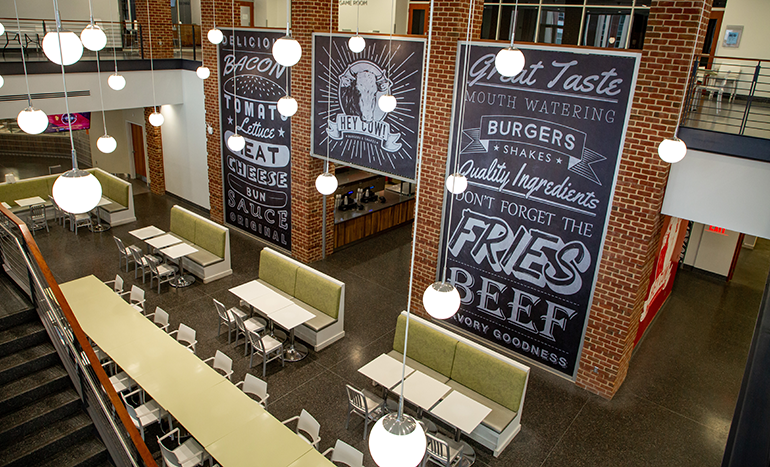 “Student reception to this brand has been phenomenal,” remarks Ryan Wheeler, unit marketing specialist for Sodexo On-site Service Solutions, which operates dining services on the Liberty campus. “Hey Cow! has a constant line of customers from open to close.”

Hey Cow! was developed last summer using both Sodexo’s brand development team and on-campus chefs, who created the menu based in part on taste tests conducted with students to measure the relative merits of different burgers and milkshakes.

The current menu includes of a series of standard beef burgers with various topping combos, plus a turkey burger, a veggie burger, a grilled chicken sandwich, a pulled barbecue pork sandwich and chili con carne with Frito chips and cheddar cheese. Side options include fries, onion rings (both also available in entrée size) and fried pickle chips and shakes come in five standard formulations: strawberry, chocolate banana, classic vanilla, double chocolate and Oreo cookie. There is also a daily special burger and milkshake.

The menu rotates seasonally to remain fresh and engaging.

Burger prices range from $4.99 to $5.79 while the milkshakes are $3.99. Some of the burgers are available as part of a meal equivalency swipe under Liberty’s meal plan.

“This has quickly become a student favorite,” remarks Wheeler. “We wanted a concept more in line with the type of restaurants we know our students frequent off-campus.” Those restaurants reportedly include burger concepts like Five Guys.

Montview is a major retail dining hub on the Liberty campus. In addition to Hey Cow! it includes Mediterranean (Garbanzo), pizza (Woodfire) and Asian (Star Ginger) concepts, plus the specialty beverage Argo Tea station and a c-store called The Grid that won an FM Best Concept Award two years ago.

“We are immensely proud of the Hey Cow! success story,” says Sodexo District Manager Duane Davis. “When you build a concept, you want it to do well but cannot predict how it will be received. Now that we’re at the end of the semester and sales are still incredibly strong, I'm very confident we made the right decision.”