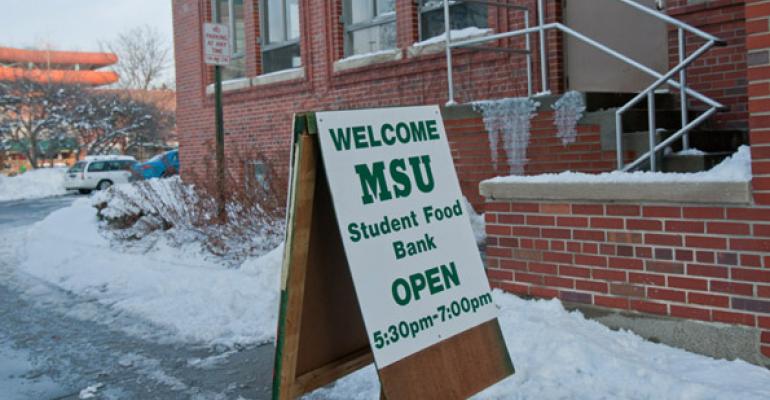 <p>Five years ago, there were five food pantries on college campuses. Now there are 121, according to Michigan State, which has been operating its MSU Student Food Bank since 1993.</p>
News & Trends>Colleges & Universities

As schools and student groups continue to establish university pantries to battle food insecurity amongst peers, campus dining programs are finding ways to pitch in.

When you’re preparing dishes that yield 50 servings, you don’t often stop to consider hunger. After all, you’re surrounded by available calories that your customers are welcome to indulge in—as long as they’ve purchased a meal plan.

But where do those in your populace who can’t afford a meal plan go for food?

“Today’s students are tasked with earning perfect grades, being active with extracurriculars and holding down a job,” says Lauren McDermott, Director of the Tiger Pantry at the University of Missouri (Columbia, MO). “Tuition is rising. Cost of living is rising. Debt is growing. Everything is working against us.”

In response, college students are increasingly turning to a new kind of campus dining: food pantries. And dozens, like Mizzou’s Tiger Pantry, are cropping up at universities across the country.

“Food is a privilege,” says McDermott. “We hope to change the perception of hunger on campus and offer resources to students, faculty and staff so that they can focus on the experiences uniquely available at Mizzou.”

Tiger Pantry is a “non-judgment zone,” explains McDermott, which provides food assistance for those in need within the university’s community. Currently Mizzou’s campus dining program doesn’t actively interface with Tiger Pantry, but those tides might be turning.

Last fall, George Mason University in Fairfax, VA, launched a voucher meal program dubbed The Student Meal Assistance Fund. It was created by two students, Yara el Mowafy and Jordan Bivings, who were initially looking for a way to redirect unused meal swipes as part of a class project.

The idea of redirecting unused meal money fell through when the system of meal cards was changed to a flat fee. Instead, the students, partnering with Mason Dining, created a university account dedicated to collecting monetary donations to buy meals for students who lack the funds necessary to purchase sustenance. In fact, Sodexo, the school’s foodservice provider, helped to establish the fund by making a $1,000 donation.

Until Mizzou can get some kind of collaboration up and running, McDermott and her team encourage students to use surplus swipes at campus convenience stores to buy non-perishable foods they can donate to the pantry.

It’s not a perfect alliance, but it’s a start.

“As a foodservice director, food insecurity is not something I really considered,” says Randy Lait, CASP, Senior Director of Hospitality Services at North Carolina State University, Raleigh, NC, who serves on the advisory board for NC State’s food pantry. “It’s been enlightening to hear the stories of food insecurity within our small community.”

University Dining at NC State uses the tagline “We Feed the Pack.” So when Lait came across an ad in the school newspaper referencing a pantry touting the same slogan, it stopped him in his tracks.

“My initial reaction was, ‘Is that necessary here?’” says Lait. “As a department, we’ve done hunger fighting initiatives and drives, but they tend to be more community based. It never occurred to me that our own students might be struggling with these kinds of issues.”

Lait reached out to the executive director of the pantry, who encouraged him to join the advisory board.

“My primary role has been to help guide the students as they’ve established the pantry’s structure and operation,” he says. “My foodservice experience has helped them better gauge how many volunteers they’ll need to staff different events as well as how to handle donations, apply for grants and find better physical space on campus.”

Feed the Pack Pantry is a choice food pantry geared toward the entire NC State community. “We serve students, faculty and staff, and are open to any member of our community who walks through our doors,” says Amanda Dango, executive director. “The pantry was founded in November 2012 by students and is run by students, so we embrace a ‘by the community, for the community’ approach.”

According to Dango, Lait has been an especially useful connection for the pantry because his reach is much further than the students. “He’s been instrumental in helping us to get the word out as well as streamline our operations and increase fundraising efforts,” she says.

Although there are no comprehensive nationwide surveys of student hunger yet, Michigan State University in East Lansing, MI, which has operated the MSU Student Food Bank since 1993, says the number of university food pantries has risen, from four in 2008 to at least 121 today.

“People don’t often associate need in a university environment,” says Guy Procopio, Director of Culinary Services at MSU. “But with such a large, diverse population ranging from undergrads to grads, with some paying their way and others on scholarships or supporting families, food can be a real burden.”

MSU’s Food bank is supported by charitable donations with offerings that include staples such as bread, canned vegetables and soup. Thanks to a partnership with the Greater Food Bank, the pantry also provides fresh produce.

“We provide food to about 4,000 guests annually,” says Nate Smith-Tyge, Director of the MSU Student Food Bank. “The general idea is to provide the building blocks of a menu so that the only things a customer would need to buy to supplement their pantry bag would be meat and other fresh foods.”

Each pick-up day student volunteers help package food, stock shelves and serve guests. They also conduct interviews to see how much food to give out (i.e. if a guest has a family to support, he or she gets more).

“We are fortunate to have great support from campus dining,” says Smith-Tyge. “They sponsor one of our biggest annual events, the Help Tackle Hunger Food Drive. They also provide food storage, both cold and dry, and if we need to do a large donation pickup, they will make arrangements with their trucks to pick it up for us.”

“The partnership we share with the food bank is a perfect example of how MSU operates as a community,” says Procopio. “Our colors might be green and white, but we’ve been green for some time. Helping one another, our environment and our community is part of our culture.”

As such, MSU views the food bank not only as a service for those in need, but also as an opportunity for those looking to get involved.

“MSU takes volunteering very seriously,” says Procopio. “The food bank allows students to get involved outside the classroom, to learn about humanity and stewardship and team work.”

But organizing volunteers is one of MSU’s biggest ongoing challenges, reports Smith-Tyge. “We struggle with managing people,” he says. “If we implement a system that ensures we have a certain number of volunteers here on distribution day, then no one shows up. But if we leave it as a free for all, we have too many.”

According to the USDA, full-time students generally do not qualify for supplemental nutrition assistance programs unless they are the sole supporters of a child younger than 12 or they hold a part-time job.

And while college students are notorious for getting by on less-than-nutritious food, as the price of groceries continues to soar, more are struggling to find their next meal.

“On campus guests who don’t qualify for food stamps can be divided into two segments: those who can’t afford anything and those who can only afford low-quality nutrition like pizza and ramen,” says Beth McGuire-Fredricks, a food pantry co-founder at Stony Brook (NY) University, where the average cost for an undergraduate residential student—tuition, fees, room and board—is $19,358 a year.

"When we heard rumblings around campus about students running out of meal points at the end of the semester we knew we had to do something," says McGuire-Fredricks’ counterpoint, Casey McGloin, food pantry co-founder.

Billing itself as a healthy food pantry, Stony Brook provides items for food-insecure students, staff and faculty on campus. “We’ve stocked our shelves with a range of healthful options,” says McGloin.

Before opening its doors last September, the pantry spent $7,000 to purchase all of its food. The money was raised and donated through a number of on-campus charity drives. On opening day, there were more than 50 guests waiting to be helped.

The pantry, which is located in a dormitory basement, is open two nights a week. It provides staples like pasta, dried fruit, canned vegetables, quinoa and breakfast bars. All items are prepackaged in bags donated by Campus Dining Services.

“We work with the campus nutritionist to create bags that are well-balanced,” says McGloin. “We want to send our guests home with high-quality nutritional products that will keep them feeling fuller, longer.”

At both Stony Brook and MSU, those looking to donate are encouraged to give monetary donations as the food pantries can often stretch the dollar much further than an individual.

“When you search for college food pantries, our names pop to the top of the list,” says Nate Smith-Tyge, Director of the MSU Student Food Bank. “With so many other schools reaching out to learn about our programs we thought it made sense to create an association that could share information and best practices.”

Currently CUFBA represents about 50 college food banks across the country. Most of them started in the past four or five years and are run by the school or student groups. Smith-Tyge estimates there may be an additional 50 on-campus food pantries that have yet to join the organization.

“We want to create a place for existing as well as up-and-coming pantries to get information, share stories and troubleshoot challenges,” says Smith-Tyge.

At the moment, CUFBA is mostly an online-based professional organization that seeks to provide support, training and resources. Eventually, the association hopes to launch research projects to get a better understanding of food insecurity on college and university campuses. It will then hopefully expand into an in-person conference.

But, for now, according to Smith-Tyge, getting the new website up and running is its primary objective.

According to Michigan State University Student Food Bank, the number of food pantries on college campuses has increased rapidly in the past six years. “On average, we’ve been getting three to four calls a week,” says Nate Smith-Tyge, Director of the MSU Student Food Bank. 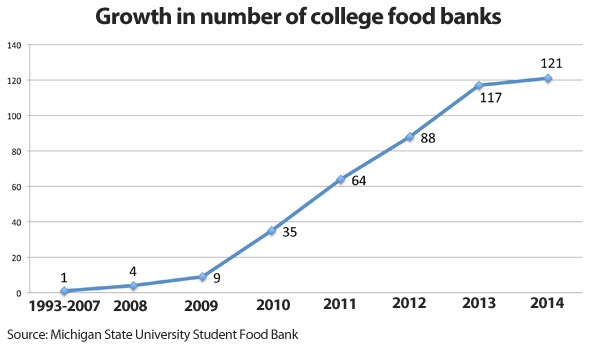 The chart above represents the number of college campuses that have started food banks after consulting with MSU Student Food Bank.