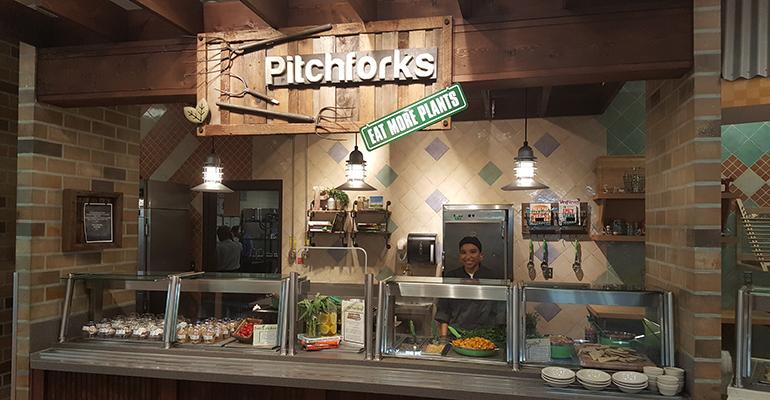 Pitchforks
The signage was made from reclaimed and repurposed sustainable materials—even the pitchforks themselves.
News & Trends>Colleges & Universities

Pitchforks, an all-vegan food station that opened in the fall, has quadrupled lunch sales.

Panko-crusted sweet potato burgers piled high with sliced avocado and shaved red onion. Seared tofu banh mi served with pickled zucchini noodles and a side of beet couscous. These are some of the plant-based protein options at Pitchforks, a new, all-vegan food station at Canisius College in Buffalo, N.Y. Since opening in the fall of 2016, the new station has appealed to vegans and non-vegans alike, quadrupling sales at lunch and attracting attention from other schools.

The initiative started with the college’s vegetarian club. “They wanted to get more vegan options on our menu,” says Chef Jennifer DiFrancesco. So in the winter of 2015, the dining program revamped its grab-and-go section, dedicating one cooler to vegan and vegetarian items.

“Even our chefs at the time worried it would be very hard to pull off,” says John Tychinski,

director of dining services. “But we saw a 76 percent increase in revenue and 65 percent of the sales were vegan/vegetarian. So students weren’t just asking for it; they were purchasing it.”

At the start of the 2016 school year, the Canisius dining program went one step further and created Pitchforks, an entire station of vegan comfort food. “We wanted to provide options for not just vegans,” Tychinski explains,” but anyone looking for healthier entrées and plant-based proteins.” Kung pao cauliflower over white rice, side of shredded kale, pear and cranberry salad with pomegranate seeds in a balsamic dressing and garlic hummus with toasted pita chip.

In order to develop the menu, DiFrancesco visited popular vegan and vegetarian restaurants in Buffalo’s trendy Elmswood Village neighborhood, where students hang out. Next she researched cookbooks for ideas and found particular inspiration in “Thug Cookbook” with recipes such as roasted beer and lime cauliflower taco.

“The goal was to not only offer delicious, hearty, vegan options but to also lure in any meat-eaters passing by,” says DiFrancesco. “We chose to make it vegan instead of vegetarian because a guest can also use our salad bar to add cheese or other toppings if they wish.”

The result is a menu that cycles over 28 days with most everything made in house from DiFrancesco’s own recipes. Entrées range from spicy kung pao cauliflower with rice to bowls of bok choy, farro and squash. Vegan desserts such as oatmeal banana cookies with dark chocolate chips and lemon bars with raspberries are also popular at the station.

Connecting with the vegan community

Dining services also recruited a vegan and a vegetarian to work the station. “It’s one of biggest compliments we receive,” says DiFrancesco. “Guests are always telling me how great it is to have such knowledgeable people behind the counter who can talk about the ingredients and protein content.”

DiFrancesco also hooked up with The Humane Society of the United States to consult with Stefanie Heath-Higgins, the society’s local food policy coordinator, and Ken Botts, a chef who helped open the nation's first vegan cafeteria at University of North Texas. “They’ve been such a big help,” says DiFrancesco. “They keep me motivated and have great insight when I encounter issues along the way.

Pitchforks is located in the college’s Economou Dining Hall, where dinner is all you care to eat for $10.50 and includes all the dining hall food stations. At lunch, entrées at Pitchforks cost $6. “We made these entrees 50 cents cheaper than all the other food stations to encourage healthier choices,” says Tychinski. “Food operators may think going vegan drives costs higher,” he says, “but when you do most of the work in house, we’ve found that the costs are right on par with everything else we’re doing.”

Although social media and email blasts helped with the rollout, Pitchforks’ success is largely due to word of mouth. “We’re up 400 percent in sales from this station over last year when it was only half vegetarian,” says Tychinski. Not only has the general public increasingly stopped in to try Pitchforks, Tychinski says he’s seen more and more faculty and staff choosing to purchase from Pitchforks over bringing a brown bag lunch.

“We have people grab a regular hamburger off the grill station and then come to Pitchforks for the vegan mac n cheese,” says Tychinski. “It’s that good.”

The vegan food station has been such a standout success that other colleges and universities have asked the Canisius dining team to give presentations on the concept. “Pitchforks is part of three objectives we have for this year and next that are all tied together,” says Tychinski. “We want our dining program to move towards plant-based diets, sustainability and fair trade.”